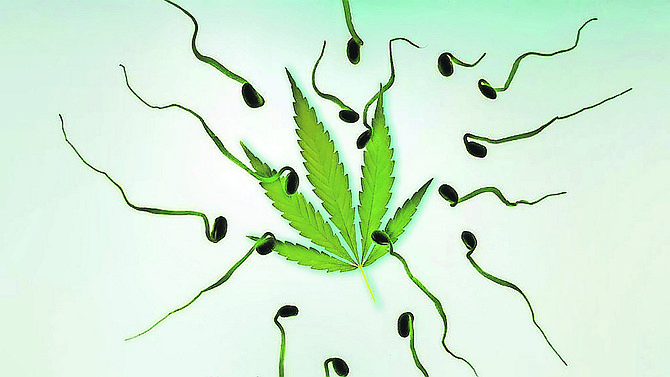 The Urology Doctor Is In

The debate rages on locally and internationally regarding the legalisation of marijuana. Men in their prime reproductive years represent a large demographic of users of marijuana. It is imperative therefore to understand how marijuana affects sperm and how it potentially affects the children conceived with male marijuana users.

Men in the Western Hemisphere are experiencing an infertility crisis, as the male fertility rates have almost halved from 1973 to 2011. An estimated nine percent of men face male infertility.

Cigarette smoking has been shown for decades in multiple scientific studies to reduce both male and female fertility levels and alter the DNA of sperm.

According to research published in the American Urological Association’s Journal of Urology in April 2019, men who smoked marijuana had more functional sperm defects that for those men who smoked cigarettes.

The active ingredient of cannabis, tetrahydrocannabinol (THC), appears to negatively affect hundreds of genes in humans and most interestingly most of the affected genes have two common cellular pathways; one of the pathways is involved in bodily organs achieving their full size and the other pathway involves genes that help regulate growth during development.

The impact of these findings on an embryo fertilised by sperm affected by THC is still unknown as research is still ongoing.

The negative effects of cannabis on sperm DNA regulatory mechanisms is well known but it is still not fully understood as to how the affected DNA is transferred to conceived children.

There is strong scientific evidence that has shown that all semen measured parameters are negatively affected by cannabis. Cannabis has shown in multiple studies to reduce sperm counts and concentrations, lead to sperm shape/morphology abnormalities, lower sperm viability and motility and inhibit incapacitation and the sperm’s fertilization capability. Animal model studies have conclusively shown that cannabis can lead to testicular atrophy, lowered sexual libido and reduced sexual function, but these results have not yet been replicated in human studies.

Do abnormal sperm parameters significantly negatively affect the ability of a male to conceive a child? Many men unknowingly have low sperm counts, or high levels of abnormally shaped sperm or sperm with poor motility but they conceive children in many cases with no difficulty.

In our Bahamaland, many rastafarians have multiple children, and they are known to be frequent cannabis users.

Future fathers must be mindful that cannabis can denature and alter their sperm DNA. Research continues, as does the debate of the exact effect of marijuana on sperm and fertility.

Fatherhood requires many sacrifices, and abstaining from marijuana use for at least six months while attempting to conceive a child may prove critical in the development of your offspring.

The best way to keep sperm healthy is to eat healthy and exercise and limit alcohol consumption and nicotine exposure.

Smoking, pesticides, obesity all also have been shown to alter the DNA of sperm.

Male infertility has multiple potential causes, including varicoceles, an abnormal swelling of the testicular vein, as well as undescended testes and uncontrolled diabetes.

Approximately 12 percent of couples fail to conceive a child after one year of unprotected sex and fall into the infertility group.

• Dr Greggory Pinto is a board certified Bahamian urologist and laparoscopic surgeon trained in South Africa, Germany, and France. He can be reached at Urology Care Bahamas at the Surgical Suite, Centreville Medical Centre, #68 Collins Avenue/Sixth Terrace, Nassau. Call (242) 326-1929, e-mail welcome@urologycarebahamas.com or visit the website:www.urologycarebahamas.com.

a) as a medical professional you should be able to refer to the specific journal article and author not just state "There is strong scientific evidence". b) lower fertility could arguably be a very very good thing for this world. c) i'd bet riding a bicycle will give men much lower sperm counts that smoking a little grass, i'm talking on the order of magnitude of 100. d) i'd like to see this study that cannabis can alter your DNA, can you please name the journal and author? seems there has to be a lot more things in the world that can alter your DNA like the beta radiation used to ripen your bananas. Perhaps he means alter the RNA not the DNA. RNA alteration happens within a lifetime, DNA alteration happens over many generations.