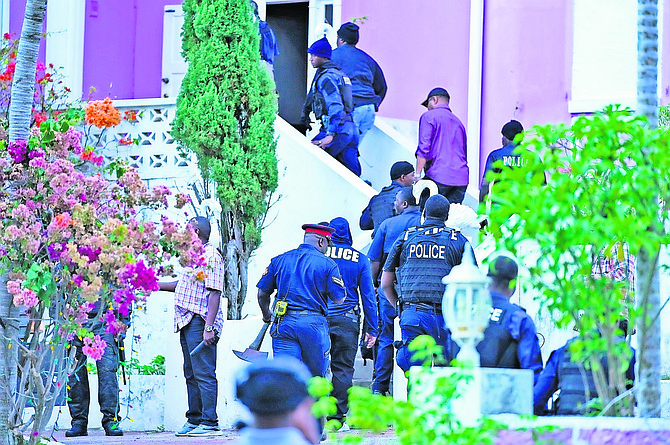 Police at the scene of Friday's incident

IN THE face of serious allegations levelled by relatives of three men fatally shot by police on Friday, Acting Commissioner of Police Paul Rolle urged people to give officers the opportunity to have their say in court before conclusions are drawn.

In an exclusive interview on Sunday, several relatives of Jamaal Penn, Valentino Pratt and Trevor Cooper questioned the manner in which police carried out their operation in a home off the Eastern Road because six children were present.

The relatives, who were also inside the house during the police-involved killing, alleged that none of the men fired at officers, contradicting police reports that there was an exchange of gunfire. It was also alleged that the same officers who shot the three men were investigating the incident.

The acting commissioner denied the latter claim. He urged those relatives with information to speak with police.

“They are not,” the acting commissioner said when he was asked about relatives’ claim that the police shooters were among the officers investigating. “The officers that were involved in the shooting incident are not a part of the investigation.

Asked if the killing of three people by police in one incident was an extraordinary event, Acting Commissioner Rolle said: “I’m not certain that this is the first time that it has happened, but I do not wish to comment because I was not there and in fairness to the officers concerned, people should give them the opportunity to have their say in court.

“The court hearing is going to be open so I don’t know that it’s fair for me to comment on stuff like that.”

He was first asked to respond to concerns from relatives of the men that the operation could have been carried out differently taking into account the presence of children and claims that police were not fired upon.

To this, the acting commissioner said: “What I would say is that if any of the family members who may have some information, they can come into the Central Detective Unit and we would have them interviewed with whatever information that they can offer and we would be more than happy to entertain them.

“But I’m not inclined to be discussing the veracity of, or confirm or deny any kind of information in the media. The police are conducting an investigation into it and there will be an inquest at the end of the day.

On Sunday, a young boy who was present said that one of the three men killed by police on Friday pleaded with officers not to shoot because children were in the house.

When officers stormed the sprawling pink and white house just off the Eastern Road in the early morning raid, there were six children inside, The Tribune was told.

Two of them, with the permission of relatives, gave a chilling account of what unfolded when the armed officers entered the house where they slept. The Tribune has decided not to reveal any identifying factors related to the boys so as to preserve their identities.

“He looked at me and took his last breath and mummy was crying,” the younger of the two boys said. “The police came and he did say, ‘don’t shoot, my children in here’.

“He was saying don’t shoot, don’t shoot,” the older boy said. “He was holding me and police start saying, ‘put the boy down’, so he put me down and the police come up the stairs and round him and shoot him in his back.

“And I had blood on my clothes ‘cause I fell down in the blood on the floor.”

On Friday, authorities said the men were killed in an exchange of gunfire.

According to Chief Superintendent Solomon Cash, police discovered 22lbs of marijuana and two additional firearms afterwards in a search of the property. In total, police said three weapons were recovered.

At the time, several people were arrested.

Police said this was the result of a manhunt operation in the area to locate a wanted suspect for a recent homicide and recent shootings in New Providence.

Officers were able to enter the property because they were granted a search warrant, CSP Cash told reporters.

God I hope they didn't kill these men just because of some weed.....

Looks like Bahamas police are getting their raid and kill techniques from a source with much practice.

Don't think Mossad is interested in The Bahamas, but you never know!

It's good to see that our police are trained well enough to take out the bad guys and leave the innocent unharmed. I'm sure other criminals will now think again about intentionally keeping their children close by hoping that they can escape capture/punishment. Well done to our police on this successful raid.

That is because they walk up to the criminals and executed them. If guns was firing at the police: 1. The police would've at least suffer some kind of injury 2. People other than the criminals would've been scrambling for cover and the cops would not have been able to determine whether they ware enemy or not, especially in the night. 3. So someone else other that 3 criminals (police or family members present) would've been shot. On my original post the other day one guy said he didn't care either way I disagree but I could respect that, but one guy try and justify it by saying the police are well trained so it was possible. We as Bahamians cannot be foolish to believe anything people say to us that is why the politicians use and abuse us.

Forensics should be able to determine whether or not there was an exchange of gunfire! Problem is, the police are responsible for that too

I once attended a court proceeding on Eleuthera in which the officer who initially investigated the case served as both the prosecutor and a witness. He actually was sworn in, took the stand, and asked himself questions and answered them. The magistrate seemed to think this was just perfectly fine. Uh ... justice? Uh-huh.

Indeed ... it was no joke at all to the accused, who got totally railroaded.

Clamshell, in no way am I trying to call you a bad name, but man, I don't believe you...that never happened as you described it. We (Bahamas) are not that bad...are we?

Respectfully, sir ... I was there. The defendant worked part-time on my property. He was a Haitian with legal work papers, if that explains anything. But I agree with your disbelief, as I would not have believed it if I hadn’t seen it with my very own eyes.

Populace wants believe that all comrade policeman's involved and regardless they ranks will eventually have their to answer what really happened day clear or be made account their actions but in meantime the populace expects Commish will immediately at minimum - reassign policeman's to desks duties, yes, no?

As all Christian's will say (pablojay) - this was God's will and he worked through the members of the police force to have these people brought before His gates. Praise Him! For he allowed our police to shoot straight and true and to avoid injury.

They got rid of Greenslade because he was to civil when it came to dealing with criminals. Notice how "murder by cop" has gone up significantly after Greenslade was transferred. I am not usually a "bleeding heart" but you have to be concern when swift justice has become extremely swift. Base on how those police were dress and the semi-automatic they were packing, they didn't come there to make any arrest. Probably call the Coroner and the undertaker an hour before the raid and said, "someone ga dead tonight".

The police have killed more citizens under Marvin Dames and Anthony Ferguson than ever in the recorded history of The Bahamas. And, as always, the accounts of civilian witnesses and the police are like night and day. Do you feel any more safe that the police is regularly engaging in this type of activity? Home invasions? Do you think this brings any more closure to the families and f the victims who were allegedly killed by these people? Wouldn’t they rather that the matter went before the courts and the truth came out to the public? Right now as it stands they still don’t know who killed their loved ones, and in this lifetime they will never know. And after multiple killings like this, the police still don’t have to answer.