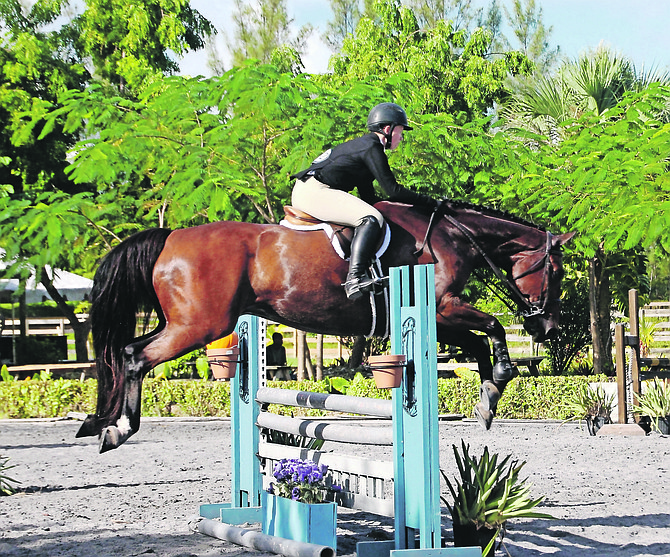 FANS of equestrian sport gathered on Saturday to celebrate the accomplishments of the 2018-2019 season at Equestrian Bahamas’ 6th Annual End of Year Awards Ceremony.

Riders and horse owners proudly stepped up to receive the beautiful aqua, black and gold prize rosettes awarded to the high point scorers in each category of the competition.

This year for the first time ever there was a tie for the Junior High Point Rider of the Year. Lila Cafferata of Grand Bahama and Sara Gottberg of New Providence were joint recipients of the D’Aguilar Equitation High Point Rider Trophy, awarded to the rider(s) amassing the most points in a single equitation division.

The excellent horsemanship of Bahamian riders was on full display as they celebrated and appreciated their equine partners: Camperdown Equestrian Centre’s ‘super pony’ Trade Secret swept the honours, being named Hunter Pony of the Year, Jumper Pony of the Year, and winning the Dr Francis Adderley Perpetual Trophy, awarded to the horse or pony with the highest overall points accumulated in Jumper Divisions. Kathryn Goulandris’ Dreamboat was named Hunter Horse of the Year, while Erika Adderley’s Casino Royale won Jumper Horse of the Year.

Molly McIntosh was the winner of the prestigious Equestrian Bahamas Junior Sportsmanship award, emerging as the top candidate out of a field of seven riders who were nominated by their peers and their coaches for demonstrating sportsmanship, consistent effort, a positive attitude and a commitment to equestrian sport.

Riding will continue over the summer in a series of instructional summer camps that are open to all, and competition will resume in the fall.