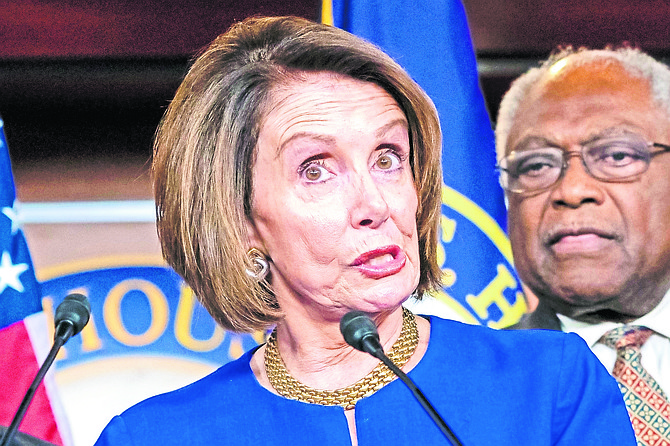 Nancy Pelosi and Tim Ryan are both Democratic members of the US House of Representatives, but they don’t really have much in common beyond that. In fact, Ryan ran an unsuccessful campaign to unseat Pelosi as House Minority Leader in 2016, before the Democrats swept into control of the House last year. But Ryan and Pelosi do share something now. They are both focused on and worried about Ohio.

Ryan represents a district in eastern Ohio that lies along the Pennsylvania border. It’s home to Youngstown, a decaying rust belt city that has become as emblematic of the deleterious effects of globalisation on traditional smokestack American heavy industry as was Lee County (Ft Myers) Florida of the Great Recession that toppled investment banks and threatened to wipe out American retirement accounts just over ten years ago.

Remember that? Every other story about upside down and underwater mortgages seemed to be datelined in or near Ft Myers in southwest Florida, where county authorities had eagerly embraced the pre-recession housing boom and lenders had encouraged people to invest in new inland planned communities like Lehigh Acres. By 2010, you could literally see on TV tumbleweeds blowing down the deserted streets of Lehigh Acres. Empty, abandoned, foreclosed houses were everywhere.

Youngstown is like that. It has become a symbol of a greater phenomenon. Unlike nearby former steel industry giants Cleveland and Pittsburgh, Youngstown and smaller neighbouring faded post-industrial cities like Niles and Warren have seen few benefits from a diversifying and differentiated world economy.

These smaller cities have also been unable or unwilling to move to attract health care, IT, finance and other businesses that have helped Cleveland and especially Pittsburgh rebound and progress.

Ryan’s eastern Ohio congressional district had also not voted for a Republican presidential candidate since Richard Nixon in 1972. Until 2016, that is. Despite the still-strong union ties in most of his district households, Ryan now admits the Democratic party has lost its way with his constituents. Ryan, by the way, is one of the nearly two dozen current Democratic candidates for president.

And even though Youngstown and environs have experienced few of the positive effects of job growth and unemployment decline that Republicans currently boast about, Ryan acknowledges U.S. President Trump retains much of his grip on local voters.

Ryan and other local politicians of both parties told The New York Times that while national Democrats rant on about Trump’s hidden tax returns and corruption, many Youngstown voters don’t seem to care. “I don’t give a damn about Trump’s tax returns,” one said. “The fact is that China has been ripping us off and Trump is hitting them in the face with the tariffs.”

Trump was very much on the minds of Ohio Democrats at their recent big annual state fundraiser, where House speaker Pelosi gave the keynote address. She tried to lift spirits left sagging after the GOP swept all the top state offices in November.

“We (in the House) will continue to investigate this president and hold him accountable,” Pelosi said. “We will defend our democracy.”

Much of the oratory at the session reportedly focused on court-mandated redrawing the lines in Ohio’s 16 congressional districts which are expected to tilt the balance toward Democrats. It was high-minded and principled.

That won’t likely matter much next year in Tim Ryan’s district. Most voters there have already made up their minds - and most of those still like Trump.

They know how to party in Boston

When you think of professional sports championships, do you ever associate a particular city with numerous titles? Los Angeles, perhaps, where the Lakers, Dodgers, hockey’s Kings and the newly powerful NFL Rams and Chargers reside? New York? The football Giants, hockey’s Rangers, and of course the mighty Yankees have all won relatively recent championships. What about Chicago? Michael Jordan won all six of his NBA crowns there. The White Sox, Cubs and Black Hawks have all won world championships. Maybe it’s Miami. The Marlins have won two titles in the past 22 years, as have the Heat in basketball. And the Dolphins still boast the only undefeated season in NFL history.

Let’s just talk about the past 20 years, since the dawn of this 21st Century. In terms of sustained success across all of its major sports, no American city comes even close to rivalling the northeast metropolis known as the Hub.

Since 2000, Boston has won 12 pro sports championships, led by the Patriots (six) and Red Sox (four), who will both be defending their current titles this year. The Celtics in basketball and Bruins in hockey have also won league championships during this time. And the Bruins will now face the St Louis Blues in this year’s Stanley Cup finals; they could add a 13th crown for Boston very soon.

Following Boston on the list of pro titlists is Los Angeles, with seven (Lakers and hockey’s Kings); Pittsburgh (hockey’s Penguins, Steelers) and Chicago (hockey’s Black Hawks, both baseball teams) with five, and three others (New York, Miami and San Antonio) with four each.

But only Boston has won championships in all four major American pro sports since 2000. If you’re looking for the real City of Champions in the US, like it or not, it’s Boston – by a mile.

The German bank in the US revealing some harsh truths

The Germans have a word for it, and like many German words, the English translation requires several words to translate accurately. The word is schadenfreude. It means taking some satisfaction from the misfortune of others.

So OK, you may as well admit it. Doesn’t it feel a little bit good to read in the newspapers and watch on TV as a big scandal involving money laundering and general banking malfeasance continues to unfold – and it doesn’t appear to involve The Bahamas, or even the broader Caribbean, for that matter? There are no bullies in Washington, New York, London or Brussels cooking up new ways to make life difficult here and in other places whose weather and ambience those earnest men and women can only envy? Especially when there are lingering suspicions their own domestic practices are hardly pure as the driven snow they, but not we, often see.

Investigators seem to be closing in on banking irregularities involving Trump and Germany’s Deutsche Bank. It’s a bit hard to foresee how this will all turn out, but the elements of the case appear to involve the German giant bank continuing to lend to Trump’s company - and that of his son-in-law Jared Kushner, pictured right,  - really large sums of money after virtually every other major bank grew weary of Trump’s company’s defaults and stopped doing business with them.

Deutsche Bank has reportedly lent Trump and Kushner’s companies tens of billions of dollars over many years, and may have been holding over $300 million in Trump debt when the new US president took office in 2017. The German bank has also been investigated in the past for laundering suspicious Russian money. Now Deutsche Bank’s internal anti-money laundering unit, based in Jacksonville, is finding details that don’t reflect well on any of the bank, Trump or his son-in-law.

Congressional investigators are intensifying their efforts to figure out if the bank’s relationship with the American president was illegal, unethical or both.

In The Bahamas, meanwhile, we can sit back for a change, relax with a cool beverage and watch them fight it out.

This time, Trump's the rocketman

Still on the subject of Trump: He seems to be persisting with an idea that clearly appeals to him but is sure to offend a lot of people in the US. Reported objections from many different quarters have so far not deterred Trump from proposing changes to one of the few American national traditions everyone can still support.

The Fourth of July fireworks extravaganza on the National Mall in Washington is nationally televised to millions of viewers and is a thrilling commemoration of the nation’s Independence Day. Over half a million people regularly attend in person. This celebration has been free of politics at least since 9/11/2001.

Trump reportedly wants to move the fireworks to a nearby park so he can figuratively wrap himself in the flag and deliver a nationally televised address from the steps of the Lincoln Memorial, turning a patriotic tradition into a political sideshow.

This story is not yet complete, but Trump holds almost all of the cards. He can likely do this if he insists. And he likes to insist.