Young has his most productive offensive outing of the season 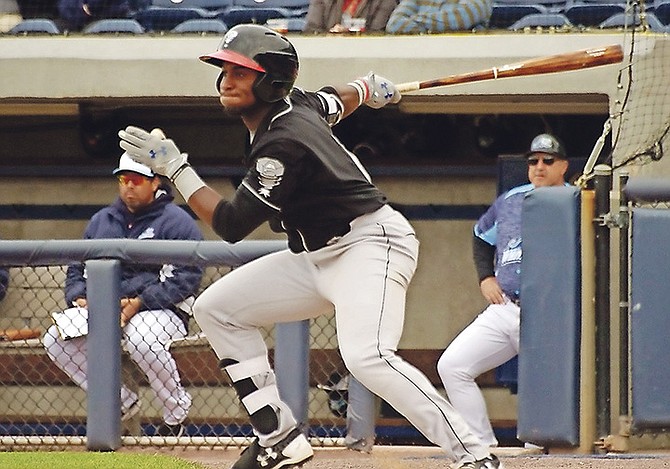 Chavez Young in action for the Dunedin Blue Jays.

CHAVEZ Young had his most productive offensive outing of the season and Lucius Fox got the better in the first game of his head-to-head series against Jazz Chisholm in minor league baseball play.

Young finished 3-5 with one home run, three RBI and scored two runs as the Dunedin Blue Jays took three of four games to close out the series with the St Lucie Mets.

In a three hour and 35 minute game, which was the longest game of the year for Dunedin, Young helped to break the game open with a nine run fourth inning to put the Blue Jays ahead for good.

It was the most runs scored by Dunedin in a single inning this season.

After a single from teammate Christopher Bec, Young then took a 3-2 pitch to left field for his second home run of the year and give Dunedin a 2-0 lead.

The lineup came around and in Young’s second plate appearance of the inning, he delivered an RBI single to plate Bec once again.

The totals for the inning included eight hits and four walks.

Young also tacked on a single in the top of the fifth inning.

In game two, the Blue Jays’ only loss of the series, Young was Dunedin’s only player to record an extra-base hit for Dunedin with a two-out double in the 8th inning.

Young was assigned to the Blue Jays of the Florida State League in Class A-Advanced for the first time this season.

He was listed as the Toronto Blue Jays’ No.23 prospect in the preseason and the franchise’s farm system was listed as No.5 overall.

Fox and his Montgomery Biscuits took game one of their series against Jazz Chisholm and the Jackson Generals Wednesday night in the Double A Southern League.

Fox finished 1-3 with one run and two stolen bases of the Biscuits’ 3-0 win over the Generals.

Just last week, Fox and the Biscuits went head-to-head with and Anfernee Seymour and the Jacksonville Jumbo Shrimp.

The Biscuits got the edge, 3-2 in the five game series.

Seymour had a productive series at the plate, 4-12, with one RBI and two runs scored through three games.