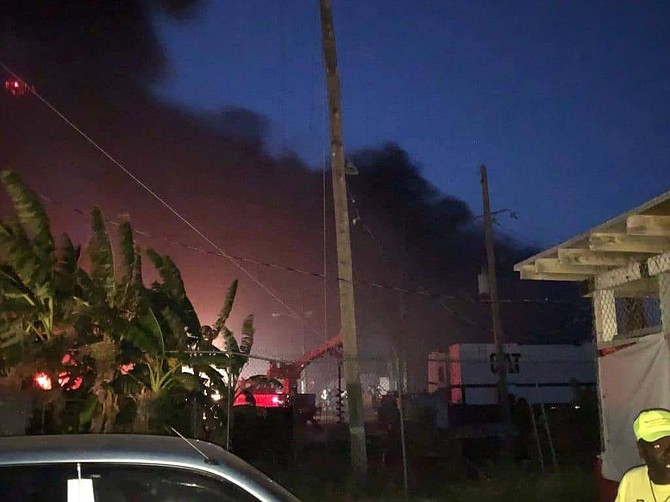 A MASSIVE fire ripped through a Bahamas Power and Light facility in Bimini last night, leaving the island in darkness.

Video of fire at Bimini BPL 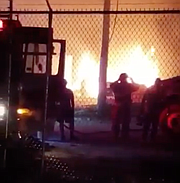 The fire at Bimini's BPL facility

“BPL is confirming a fire at our facility in Bimini, a BPL spokesman said last night. “The Fire Department is on site and working to extinguish the fire. We will provide more information as it becomes available.”

Cell phone videos of the huge blaze circulated on social media last night, showing large flames and plumes of thick smoke emanating from the building as bystanders looked on in the dark.

One resident lamented the fire meant islanders would have to rely on generators for power supply.

“With the government we got, we gone be on generator for years,” one resident is heard saying in one video.

The cause of the fire was not known up to press time. 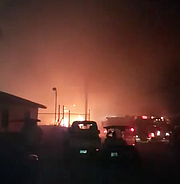 Footage from the scene of the fire in Bimini

Fantastic opportunity to do what should have been done 100 years ago: run a cable from Miami and forget all about BPL.

Scary I hope no one was hurt.

Did anyone hear BPL's union leader (Paul Maynard) blow his whistle? Perhaps this was just a disobedient faction of his gestapo goon squad well known for sabotaging BPL's operations when union memebers don't get what they want from government.

Well I guess that's it for Bimini. Closed for business until they can get a new generator. Guessing what, 3 months?

Still no report on the cause of the fires in Nassau? Can they keep getting away with this? What report from Minister of Works and Minister of National Security??? Probably collaborating their stories....

The heavily padded contracts and kickbacks behind buying new engines/generators is possibly too great an allure for our greedy corrupt politicians and union leaders alike. LMAO