Burning Up The Track With Sprinter Daejha Moss 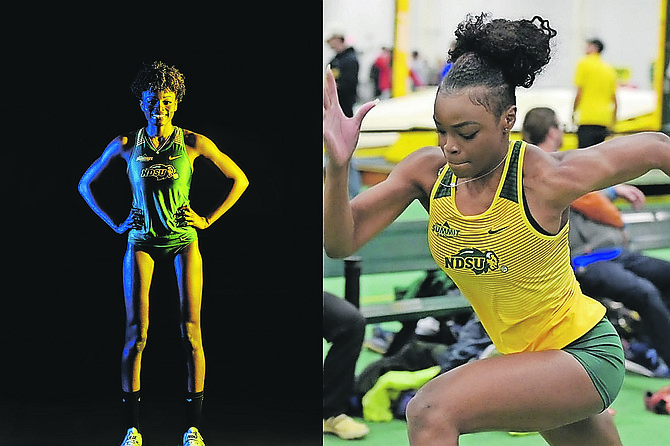 IN Nassau, Bahamas, the temperature is currently in the mid-80s with the sun blaring down on the city’s inhabitants. Add to that, blistering humidity and low wind speeds too. That Bahamian climate remains the same year-round (mostly) with the coldest day dropping to maybe the low 50s (the country’s lowest recorded temperature is 41 degrees set in 1981).

Meanwhile, in Fargo, temperatures drop well below zero for what seems like nine months a year. Snow pounds the Red River Valley month after month, day after day. Just when Fargoans believe spring has sprung, Mother Nature dumps inches of snow on the fair city. For evidence of that, look no further than this past April.

On paper, you will see that sophomore jumper and sprinter Daejha Moss was born and raised in Nassau, where the weather is always fair and the ocean is only a short walk away. It will not take you long to question and try to understand why Moss would leave that sunny weather in the Bahamas for the wintry climates of Fargo. While we may be left puzzled by that notion, Moss is less concerned with the weather and is more interested in what North Dakota State offers her on and off the track.

In fact, all it took was one visit before Moss discovered that North Dakota State would become her second home.

“My coach here Clayton Pritchard, he reached out to me and he was so charming. I knew that I had to come and take a visit. I really liked it and I’ve never seen a football game or anything and that kind of just caught my eye,” said Moss of her official visit to the school.

“So, I didn’t even take another visit to another school, I just came here, signed immediately after I visited and I have no regrets.”

Moss came to NDSU with an impressive list of accolades to her name. She was a four-time Bahamas junior national champion in the high jump. Add to that, a long jump junior national championship in 2017. Moss also represented the Bahamas at the 2017 CARIFTA Games and on the Pan Am Junior Championship Team. She finished with a silver medal in the high jump and a bronze in the long jump at the CARIFTA Games where every Caribbean nation competes against one another.

One thing Moss did not realise about North Dakota State and their track & field programme was the tradition. It was not until she stepped foot on campus in the fall of 2017 that she realised what this programme has done and what it was capable of in the future. “I wasn’t even aware of the championships or anything, I just wanted to come here. When I found out, I was so impressed and everyone was so nice and we always push each other, whether that be in the weight room or on the track,” she said. “We could just be doing a simple drill and everyone will be like ‘go Daejha’ so I really appreciate that. Everyone is so talented and so humble and I really like that about this team.”

Thanks to that constant pushing and encouragement, Moss was able to become an immediate difference maker in her true freshman season. She was the Summit League runner-up in the high jump and placed third in the long jump at her first indoor conference championship. Add to that, another runner-up finish in the high jump during last year’s outdoor season and it seemed that Daejha Moss was destined for success as a Bison.

However, whatever she accomplished in her first year has been shattered in her sophomore season. Moss placed first in the high jump in four meets this season and had a runner-up finish in the event at the Mark Colligan Memorial in late January. She set a new collegiate best in the event during the indoor season as well. As for the long jump, the Nassau native took top honours twice this season and finished runner-up twice. Add to all of that, a top finish in the 60-metre dash, setting a new personal best at 7.70 seconds.

“I was always really confident. Some people may call me cocky, but I am always really confident in myself and always knew what I had to do and get done,” Moss said of her mentality and ability to be competitive immediately. “I would be really frustrated if I didn’t perform the way I did last year. I just try not to look at anyone else’s numbers, I just focus on my own and that is what got me to where I am.”

That is not to say Moss has not had her share of growing pains since moving from the Bahamas to Fargo. While the weather is an obvious difference for her (and a big one at that) there were others as well. Even a simple act of politeness (or lack thereof) was odd for Moss. “For starters, every time we go into a room we always say ‘good morning’ back home. I noticed nobody would say good morning and it’s not like they’re being rude, they just don’t say it,” she said. “That is something that kind of bothered me for a while, but I’m used to it now.”

Not to mention, Moss had to transition to an American style of food. Oddly enough, she says the food is less salty in the Midwest, but she has grown to like it. “The food is kind of salty back home compared to North Dakota’s food,” she said. “That took some time getting used to and now I like the food and I really love Buffalo wild wings.”

Unfortunately for Moss, she did suffer a setback at the end of her indoor season this year. She tore her hamstring at this year’s Summit League Indoor Championships in Brookings. Because of this, her results were not where she wanted them to be on the final day of competition. Nevertheless, the Bison women captured another Summit League crown, their 12th consecutive title.

Due to the injury and recovery involved, Moss is using a redshirt this outdoor season to fully prepare for her junior indoor season. While the injury is no doubt discouraging, Moss is certain that she will come back stronger than ever next year. “I have a major comeback coming during indoor season, so look out for that. I can’t wait to actually start training and doing stuff and pushing my body to the limits,” she said. “Now, I’m just trying to trust in God and pray every day that he’ll help me through this tough time because it’s rough right now. I’m just trying to be hopeful and focus on school more too.”

With the use of her redshirt, Moss will also utilise the downtime to get stronger in the weight room. Moss admits that she did not start lifting weights until she came to North Dakota State. Because of that, she believes her body can only get stronger and be tested further.

“Getting stronger, definitely because back home, I never lifted weights. Then, I had to come here and start lifting weights and I can focus more on that. Getting my upper body stronger,” Moss said.

“I also want to focus on my relationships with everyone. I didn’t really get to know everyone last year and I want to get closer with my teammates. They have all been really encouraging and asking me how I’ve been and all that. I’m just going to focus on being the best teammate I can be or friend or sister, anything.”

Yes, the sun shines down on Nassau, Bahamas, more days a year than it does in Fargo, North Dakota. While that fact may lead us to ask why Daejha Moss ended up at North Dakota State by way of Nassau, it’s ultimately a moot inquiry.

The Bahamian jumper believes that she belongs in Fargo and has thrived in just two short years here. That fact alone outweighs and is far more important than the Bahamian and North Dakota weather patterns.