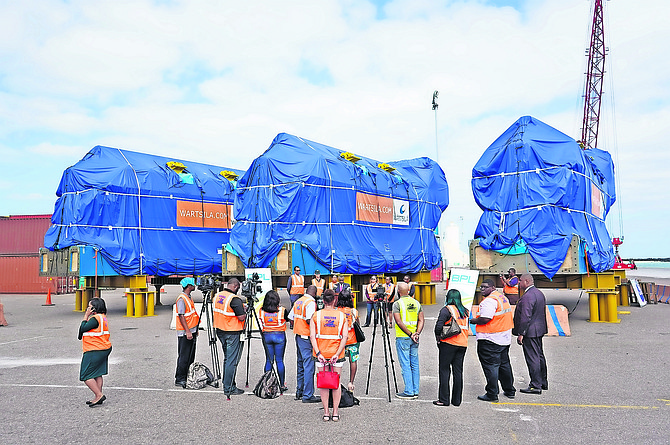 BAHAMAS Power & Light (BPL) intends to phase its way out of power generation, shifting its focus primarily to transmission, distribution and customer service initiatives, according to its chairman Donovan Moxey.

His comments came during a press conference to mark the utility provider’s official receipt of its seven new Wartsila multi-fuel engines.

Mr Moxey said the acquisition represented the first step in BPL’s new strategy and strategic outlook, which he said centres on the refocusing of the entity.

He said a component of this new direction is BPL’s relationship with Shell North America, citing its arrangement to construct a 220-megawatt gas power plant in the coming years.

BPL’s new Wartsila engines, which will be installed at Clifton Pier as a part of a $95 million, 132-megawatt power station this summer, are equipped to run on LNG once the fuel source becomes available in The Bahamas within the next two years.

“We believe that with the combination of renewables, as well as our gas to power plant, that we will have much more stable generation of electricity in The Bahamas, as well as be able to have cleaner and more reliable energy within The Bahamas,” he noted.

Mr Moxey added: “I would like to thank the Bahamian people for their level of patience and understanding with BPL given the challenges that we’ve recently faced with load shedding. We are doing everything that we can, within our power, in order to get stable generation to our customers.

“We believe that with what we are doing strategically in the organisation, this is the first step in allowing us to achieve stable power at the lowest possible energy cost for all of our consumers.

He said once the engines are installed and commissioned, BPL would finally be in a position to offer reliable, stable power generation to New Providence, and will be able to free up resources to address ongoing issues on the Family Islands.

He also contended the installation of the new engines should curb the “millions of dollars” spent by the government on rental generation on an annual basis, and “end the current ongoing need to load shed — all of us will appreciate that.”

Mr Bannister said the government has steadily worked to bring about the reform needed at BPL in as short a period of time as possible.

“You can all see from our actions, that energy sector reform is a critical part of this administration’s agenda: BPL is at the heart of that reform agenda,” he said. “That agenda centres on energy conservation, increasing the use of the country’s renewable resources to reduce our carbon footprint and the provision of more affordable energy to residents, small businesses and larger commercial enterprises.”

He closed with a call back to two pronouncements made to him by Bahamas Electrical Workers Union President Paul Maynard following his appointment as minister of works: “(He) told me two things: If BPL does not cause me to go grey by the time I leave office, it means that I’m dyeing my hair; and I am not dyeing my hair so I am going grey. The second thing he said is, whatever my worst nightmare is, times it by 10 and that’s BPL. Well, I am going to tell you today, even though I am getting more greyer every day, he was right about that, I am changing his second pronouncement to whatever my sweetest dream is, that will be BPL by the time I leave office.”

BPL’s “summer readiness programme,” as it is being referred to by company executives, will also be aided with the return of three of the company’s standard generators - DA9, DA10 and DA13 - all of which were down for repairs in recent weeks.

So...the original plan had Shell NA building a turn key plant*,* approved by** technical staff, previous Board and Cabinet. Then...the CEO and new Board decide to carve out the purchase of the engines... purchased from Watsilla at a cost to taxpayers of $95 million (plus all the additional for installation). Now... they are turning it over to Shell NA and focusing on improving distribution, transmission and customer service. Now that they spent the funds for upgrades on these engines..same engines Shell NA was responsible for purchasing and installing....where are the funds coming from for the upgrades!!! What am I missing....