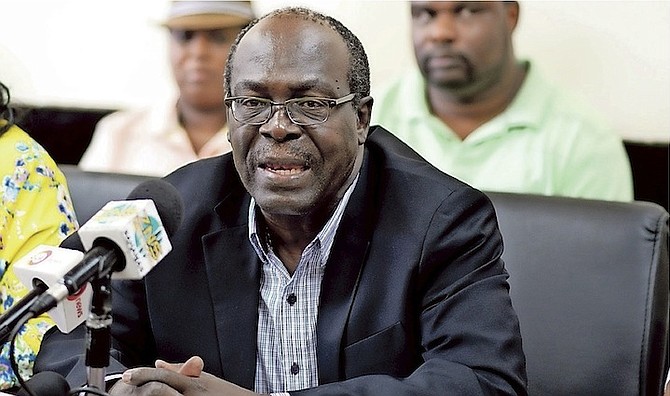 A trade union leader yesterday said “within 14 days” he will seek a Privy Council hearing on a ruling that threatens to “paralyse” industrial agreements and undermine worker protections.

Obie Ferguson, the Trades Union Congress (TUC) president, told Tribune Business it was “in the interests of the entire workforce of The Bahamas” that the highest court in this nation’s judicial system consider a Court of Appeal verdict involving Morton Salt.

Moving to secure the Privy Council’s permission for the hearing directly, after the Court of Appeal ruled it did “not have the jurisdiction to grant leave” itself because the matter originated with the Industrial Tribunal, Mr Ferguson said the existing ruling will create “a fundamental shift” in workplace relations throughout The Bahamas if it stands.

This is because the Court of Appeal ruling, which found in favour of the Inagua-based salt harvester, found that an industrial agreement was an employment contract and had to be assessed in accordance with common law principles.

This threatens, and undermines, the very rationale for such collective bargaining agreements between union and employer. A long-established practice enshrined in the Industrial Relations Act, Mr Ferguson said such agreements - once properly vetted and registered by the registrar of trade unions - cannot be altered unilaterally by employer, union or even the courts.

The Court of Appeal’s ruling thus potentially opens the way for one party to an industrial agreement to change the terms and conditions by itself without reference to the other party.

This, Mr Ferguson argued, represents a threat to worker protections and benefits. For example, he argued that if an industrial agreement was an employment contract - as determined by the Court of Appeal - then employers could terminate workers at minimal risk/cost and not have to follow a process that could lead to their reinstatement if the allegations against them were shown to be wrong.

“We are working on the application now to have it submitted to the Privy Council for consideration,” Mr Ferguson said yesterday, following the Court of Appeal hearing where he is acting for Morton Salt’s line staff union. “It will be ready in 14 days.

With the Act requiring such collective bargaining agreements to be registered, Mr Ferguson added: “Our submission is that during the registration of that agreement, the terms of the agreement are binding on the employer, employee and the union. That cannot be varied, even by the court.

“We say that the common law is not appropriate in the case of a negotiated industrial agreement. That is one of the major issues we have. If we say an industrial agreement can be interpreted along the lines of a regular employment contract then it serves to have a collective bargaining agreement.

“If it stands in the Privy Council, the effect of it [the ruling] will be to paralyse collective agreements in The Bahamas. It would radically change the practice of collective bargaining, and the import would apply to both the public and private sectors,” the TUC president added. “That’s why it’s such a fundamental issue that we need a pronouncement from the highest court in the land.”

“If this [ruling] takes effect that will be non-existent. The whole protections of the worker - and that is not to say mediocrity - it’s merely to say the level of certainty. If a worker is terminated, and terminated unfairly, there is a procedure in your collective agreement as to how that ought to be dealt with.

“It’s a fundamental difference and fundamental shift, and that’s why in the interests of the entire workforce of The Bahamas we have to explore it and get a final position on it.”

Robert Farquharson, the immediate past director of labour, last year called for the Government to intervene in the case on the grounds that it would make collective bargaining agreements non-binding on companies.

Sir Michael Barnett, who wrote the Court of Appeal verdict, found: “An industrial agreement is a contract. It is an employment contract. The Tribunal is entitled, nay obliged, to construe it in accordance with common law principles of contract law. The fact that it is given force by statute does not affect the way that the Tribunal must construe it. It is still an agreement. It is still a contract.”

Obie, careful you don't cause Morton to close up shop and leave the Bahamas. unless of course, that is what you are trying to do, then by all means carry on. you can't force a company to be in business. and if it is over one person's job who probably never showed up for work anyway, then you cause the loss of everyone else's job over one person. doesn't sound so smart anymore does it.

If the Privy Council rules that Agreements are just mere contracts, will this man and the TUC and others have the guts to stage a ten day 100% national strike?

No. They will just suck teet, roll over and play dead like a good lap dog. So why bother? Just giving money to lawyers for nothing.

Kind of seems like he's talking in circles. I find it strange that he has not mentioned once that the employment act allows employees to sue for unfair dismissal, if that is his concern. Seems like he trying to get people riled up a little and not really giving a full picture.