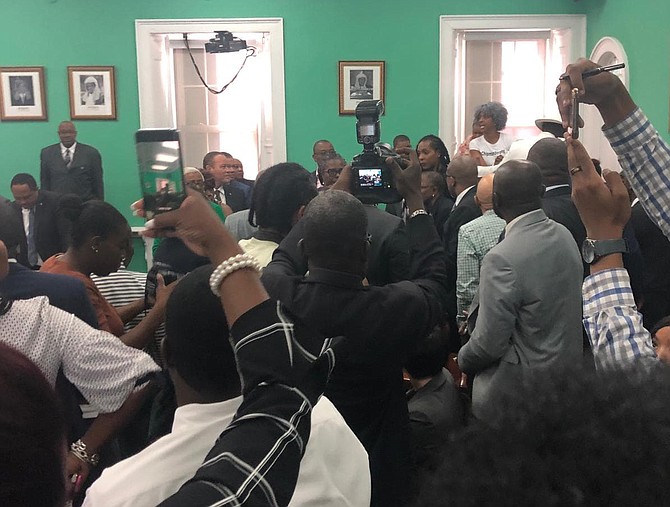 The disruption in Parliament during the Budget

A SURPRISING outburst from the sister of a parliamentarian disrupted the Minnis administration’s Budget communication in the House of Assembly yesterday and led to the suspension of proceedings.

Deputy Prime Minister and Minister of Finance Peter Turnquest had just began to table an amendment to value added tax regulations when Fontella Chipman-Rolle, sister of Centreville MP Reece Chipman, stood in the gallery and threw seven white wrist bands onto the floor of the House of Assembly.

She wore a shirt that said “Chipman strong”.

“Change the system,” she shouted as police pulled her out of the chamber. “Our land will be returned to us, not by you but by the God we serve.”

She said she was standing in protest against politicians who “raped” the Chipman family of its heritage and stole from Bahamians.

The outburst had been made more surprising by the fact that senators and the Chipman family were the only two groups in the gallery that House Speaker Halson Moultrie acknowledged at the beginning of the sitting. The Chipman family is celebrating the 100th anniversary of their ancestor Howard Nelson Chipman’s election to Parliament, the Speaker had said. Less than 20 minutes later he was calling the woman’s outburst “criminal” and announced she would be banned from the House of Assembly for the rest of the session. He also said the woman was in police custody when the House of Assembly returned from a brief suspension following her outburst.

The budget communication is traditionally the most anticipated event on Parliament’s calendar. This was the first outburst of the session so far.

The Chipman family has been a part of a long-running dispute over land. Last year Mr Chipman said in the lower chamber that maps showed his family owned the Tucker Estate between Tusculum and Orange Hill “on and off West Bay Street.”

Moments after his relative was pulled from the House of Assembly, Mr Chipman picked up the wrist bands she had thrown and mouthed “sorry” to governing party members while walking away.

He later told reporters that while he was surprised by his sister’s action, he supports her fully.

“I make no apologies for what she said because I believe in the same things she believes in,” he said, “which is justice and righteousness in Parliament and without. I think at this time we have a lot of Bahamians frustrated with the way the system has not given them a chance. For me, I can appreciate her position.”

Speaking about any repercussions his sister may face, he said: “We have to fight. We have to fight for young people so it’s more to it than just being charged. It’s about charting a course for the next generation of the Bahamas.”

Near the end of the sitting, Speaker Moultrie said Mrs Chipman-Rolle’s behaviour was a serious breach. He also noted, according to House rules, it is prohibited to broadcast such disruptive incidents. By then, however, videos of the outburst had already been circulated widely through social media and a portion of it had been broadcast by the Parliamentary Channel.

It is to bad the Speaker:s house rules do not apply to social media. The incident was all over. will the FNM Government stop Free press?

There is no investigation reporting in the Bahamas. and seeing that the FNM Government is the darling of the two leading newspaper there will be none ZERO

Too much slackness in our country .......... and it begins with Parliament ....... metal detectors should be in place to check everyone who enter the Parliament and there should be NO cellphones in the gallery (or in the chambers) ........ Right now, it's a dolly house.