'Deal With Issues Or We Go On Strike' 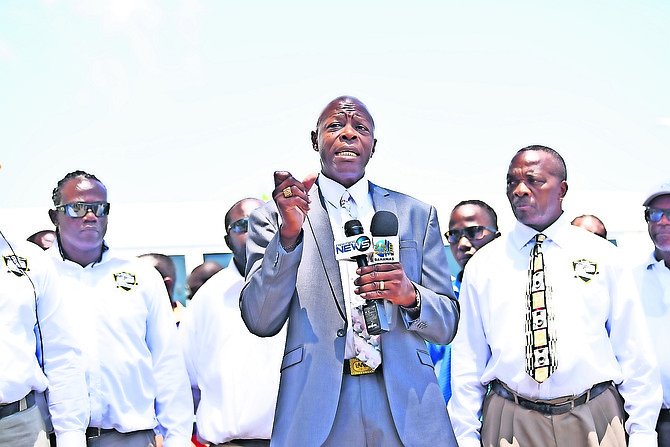 THE Bahamas Unified Bus Drivers Union has threatened to take legal and industrial action against the government if their concerns aren’t dealt with, union leader Frederick Farrington said yesterday.

Speaking at Long Wharf Beach, Mr Farrington said the union is calling for the moratorium to be lifted on bus plates.  “We also have an issue that was going on for decades with the plates for the buses with the franchise. Today we have a lot of jitney drivers are now becoming bus owners, we have a lot of franchise holders do not have buses. This is fundamentally wrong how the system is set up with the leasing of these plates. We need this to be addressed,” he said.

Mr Farrington also said bus drivers should not be penalised if the proper tools and amenities aren’t in place.

He said: “We have bus drivers who are continuously being ticketed by officers for allegedly not being on marked bus stops. Millions and millions of dollars from the bus drivers has been sent to the treasury for these infractions.

“May, this very month, now you have 330 buses have to go down to Road Traffic Department for inspection and road traffic (will be) expecting to collect $202,800 from those bus drivers.”

The union president said he has addressed this matter with Minister of Works Desmond Bannister and Minister of Transport Renward Wells but claimed nothing has been done.

Mr Farrington said: “We also have another issue that is stemming with the public at large where there are inadequate shelters throughout the corridors of Nassau. There are no shelters for passengers and that also needs to be addressed.

“We recognised over 100 bus stops that were either damaged and removed and not replaced back but bus drivers are being ticketed for these stops that aren’t in place. We are calling for these amenities to be in place for the drivers to do their daily job.”

The union’s president said enough is enough and if matters aren’t addressed the union will strike.

“I had sent a letter to Mr Renward Wells about one month now in reference to these concerns and I haven’t received any answer to that letter yet. We were silent for too long... we are giving the government at least until July 1, 2019,” he said.

By all means go on a permanent strike - this is great - please stop working ... .don't come back... the country thanks you for ending the curse of all you DGAF taxi & bus drivers.... specially any Dan Knowles or Majestic drivers......stay home and hope and pray the union can keep paying you.....