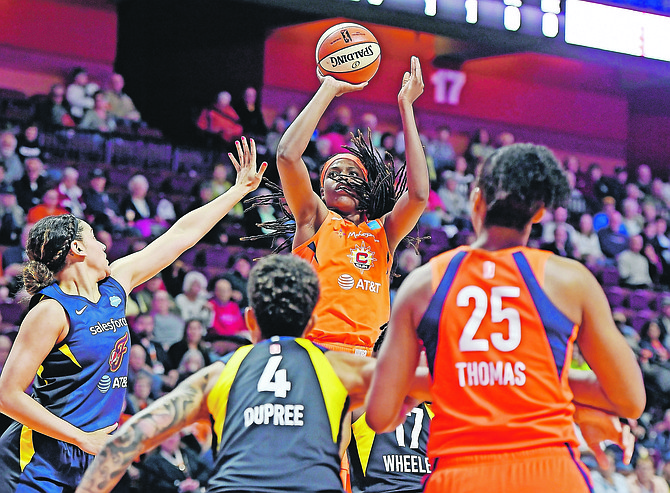 Jonquel Jones continues to show why many pundits expect her to be one of the top players in the WNBA this season as she led the Connecticut Sun to a 2-0 start.

Jones scored a team high 25 points and added eight rebounds in the Sun’s 88-77 win over the Indiana Fever at the Mohegan Sun Arena in Uncasville, Connecticut, on Tuesday night. She shot 10-16 from the field, 4-7 from three-point range and had two blocked shots.

“Just being aggressive,” Jones said of her performance. “My teammates believe in me and they told me if I kept rolling to the basket that I would have open opportunities and they found me in the right positions.”’

She opened the game with nine points in the first quarter and added another five in the second quarter. Her 14 first-half points lifted the Sun to a 40-37 lead at the half. She made three of her three pointers in the third quarter as the Sun raced out to take command with a 19-9 run. They took their first double-digit advantage and led 62-52 headed into the fourth.

Jones opened the season with a double double - 10 points and 14 rebounds - in the Sun’s 84-69 home win over the Washington Mystics on Saturday night. She also added three blocked shots and two steals in just over 30 minutes. Her early season numbers are 17.5 points, 11 rebounds and 2.5 blocks per game.

This offseason, Sun traded Ogwumike to the Sparks for a 2020 first-round pick, creating an increased role for Jones.

When Ogwumike was injured for the entire 2017 season, Jones posted a breakout season, but was then relegated to a reserve role in 2018 once Ogwumike returned to the floor. “We played her every day in practice so we know each other well,” Jones said.

“Just staying consistent, making sure I come to work every day and have that work ethic to take it to the next level,” Jones said at Sun media day.

“The year that Chiney wasn’t here because of injury I showed that I could do it.

In 2017, Jones was named to the All-WNBA Second Team after she averaged a double double, set the league’s single season rebounds total, was named an All-Star and was awarded as the WNBA’s Most Improved Player.

Once Ogwumike returned, Jones faced limited playing time and a dip in production. But she still averaged 11.8 points, 5.5 rebounds, a career-high 1.7 assists and 1.24 blocked shots per game and was named the 2018 WNBA Sixth Woman of the Year, earning the honour as the league’s top reserve for the first time in her three-year career.

“It was an important 2-0 homestand to start the season and it was important to get two early wins with us being the first Eastern Conference team to go on a West Coast trip,” said Sun head coach and general manager Curt Miller.