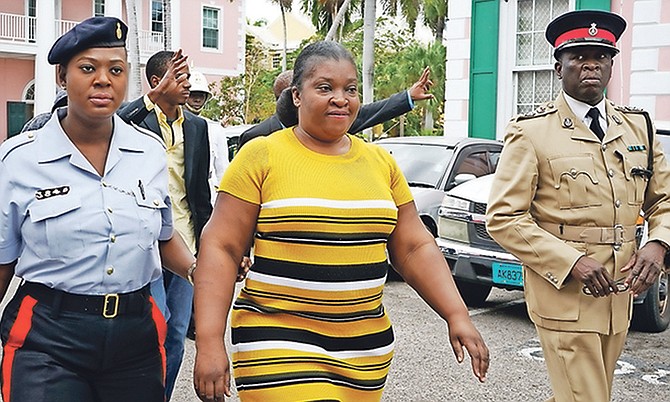 THE Court of Appeal has ordered former Urban Renewal Deputy Director Michelle Reckley and four others to stand trial over the money laundering charges a magistrate absolved them of earlier this year.

The appellate court ordered Reckley, Christopher Symonette, Stefanie Collie, Kylon Vincent and James Wildgoose to stand trial “forthwith” over “all of the offences” they were charged with in February.

In doing so, the appellate judges set aside Magistrate Ambrose Armbrister’s March 29 decision to drop all of the money laundering charges against the five accused, which resulted in all but Reckley being discharged.

Appellate President Sir Hartman Longley and fellow Justices Jon Isaacs and Stella Crane-Scoot all found that Magistrate Armbrister “fell into error” when he discharged the accused of the offences in question.

According to the ruling, on March 29, Magistrate Armbrister took issue with the money laundering charges on the basis that they were statute barred because they were levelled outside of the six-month limitation period for summary offences.

Magistrate Armbrister also declined jurisdiction on the basis that the Proceeds of Crime Act (POCA), under which Reckley and the others were charged, had been repealed and the law which replaced it was enacted on May 25, 2018, a date that was before the accused were charged, but after the alleged actions that led to the criminal charges occurred.

As a result, and having found that the criminal charges were an abuse of the process of the court, Magistrate Armbrister dismissed the charges and discharged the five accused pursuant to Section 59(2) of the Criminal Procedure Code (CPC).

The Crown subsequently appealed his decision, asserting that the magistrate “made serious and grave errors in law”.

In yesterday’s ruling, Sir Hartman noted that Section 213(1) of the CPC provides a six-month limitation period for laying charges pertaining to summary offences.

Sub-section 2(b) of the CPC, he said, provides that the six month limitation period does not apply when the offence is an indictable offence that can be tried summarily.

Thus, he said since the money laundering offences are all triable on information by virtue of section 45 of the POCA, they are indictable offences for the purposes of the CPC, and as a result, the six month limitation does not apply on those offences.

The appellate president further noted that section 20 of the Interpretation and General Clauses Act (IGCA) permits the investigation, commencement, or institution of legal proceedings in respect of any offence found after any such investigation to have been committed against any written law so repealed, notwithstanding the repeal of the written law as if it had not been repealed.

He described it as a “time freezing device” that keeps intact “any possible criminal behaviour for subsequent review, investigation, institution/commencement of prosecution found to have been committed ‘against any written law so repealed’”.

This, he said, was so as to ensure that no criminal would escape “the dragnet of the law” on the “pernicious technicality that his or her violation is of a law that has, since the commission of the illegal act, been repealed”.

Justice Isaacs, meanwhile, found that though Magistrate Armbrister discharged Reckley and the others pursuant to section 59(2) of the CPC, that section concerns the initiation of a complaint before a magistrate.

In the present case however, Justice Isaacs said Reckley and the others had already been arraigned before the chief magistrate, and were therefore “within the cognizance” the magistrate’s jurisdiction, thus negating the need for the issuance of a summons requiring their attendance at court.

As a result, Justice Isaacs said Magistrate Ambrister’s reliance on that section as a basis for discharging the five accused was “misconceived”.

In February, Reckley was charged with defrauding the government of $1,255,637.83 via the Urban Renewal Small Homes Repair programme in Grand Bahama.