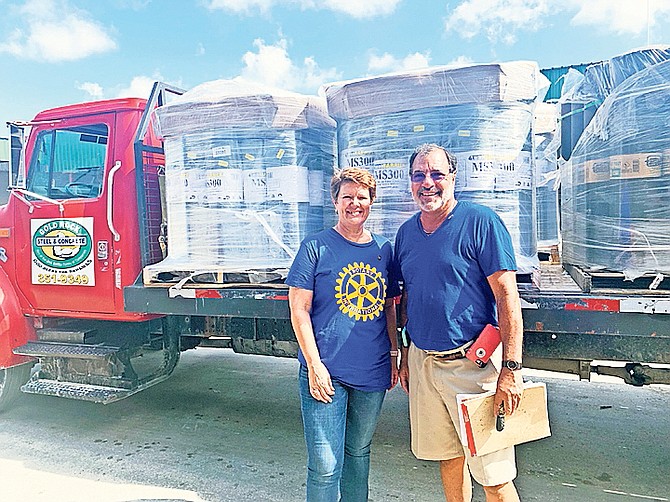 Two 40ft trailers with roofing and building materials, and other items, including brand new generators, fuel and bottled drinking water were taken to Pelican Point last week by members of the five Rotary Clubs.

According to residents, it was the first distribution of building materials in that area since the storm. It brought some hope for rebuilding in that seaside community ravaged by Hurricane Dorian.

For 49-year-old Ianthe Laing, the arrival of the Rotary Club was a “joyful” event.

“I’m overwhelmed with joy because I didn’t know that this day would come that somebody would really think about us enough to want to do this for us,” she said. “It is a new start, a new beginning.”

Pelican Point is considered a flood zone area and so many residents were not sure if they would be able rebuild with no insurance or financial aid.

Rather than leave their community, some residents have remained living in camping tents on their properties.

Another resident, Elvina Bain, sustained extensive roof damage and flooding in her home. She was very happy when the Rotary Club convoy arrived with building and roofing supplies.

“I’m so happy, I can’t even express my feeling right now, said Ms Bain. I’ve been hearing that supplies are coming since the hurricane left and this is the first time that I’m seeing it.”

With her home gutted and a leaking roof, Ms Bain said they have to deal with rainy days. “When it rains, it pours,” she said, grateful for the building supplies given her.

“This is the first set of materials to hit the ground in Pelican Point and we are so thankful because the people were so discouraged, and this brings a ray of hope in [them] at least starting to put their life back together,” he said.

“You can’t imagine the beauty of this place before the storm and the horror of this place after the storm. People who know Pelican Point, this is the cleanliest settlement on the island. But now, it just lies in ruin and the folks are really in despair.”

To bring more help and relief to residents on Grand Bahama, the Rotary Clubs of Lucaya, Freeport, Sunrise, Sunset and Grand Bahama came together and pooled their resources with Rotary International.

A five-member central committee was formed with responsibilities for setting up and managing the rebuilding programme.

Rotarian volunteer and Committee member Rich Halpern said the programme was initiated exclusively for East Grand Bahama. He said that a benefactor gave him funds to help their cause.

“We’re the first ones out there actually bringing them hammers, nails, sheetrock, plywood and peel and stick,” he said.

He explained that the second phase is to get people back in their homes.

“So, the monies that we raised with generous partners like Equinor, we’re going through the building phase – it’s very exciting. Two 40-foot trailers, all of those building materials, have been paid for through our generous sponsors, and it’s exciting for us, with just weeks after the storm that we are here on the ground,” he said.

Mr Sarles said Rotary has been working tirelessly for the past five weeks even as some of them had similar problems with their own homes.

He indicated that the organization is committed to seeing the programme through to the end.

According to Mr Sarles, local contractors are carrying out the work and will go from house to house.

“We’re going to do mold remediation. After that work is completed, we will bring in the sheetrock and before long the residents will be able to move back into their homes. Then, we’re going to help them with airbeds and doing everything that we can to get them back, and to create some sort of normalcy with their life. It makes me proud to be a Rotarian to help the people, and certainly Grand Bahama is in a situation that we need the help, and we’re doing the best we can.”

Lisabeth Knowles, area governor of Rotary 6990 for Grand Bahama, said they started with Pelican Point, and will move to Free Town, and then on to McLean’s Town.

“We’re just really happy that we can help everybody here in Pelican Point and later the rest of East End,” she said. We’ll do as much as we can with the donations that we have received so far, and we are really grateful.”

Mrs Knowles said that there is a lot of work to do, and they will continue trying to get as many donations as possible.

At least now they have some building materials that they can now struggle to follow the building codes that the MP spoke about last week. Otherwise his statement would have been moot. Maybe Rotary can also design and print out some complicated forms for the people to fill out in order to get these supplies - just like the Form A and Form C and whatever else they have to fill out with Customs and NEMA etc.

Maybe some other group can come along and help government think of other creative ways to harass the good people of East End? How about holding a national competition with prizes of $1000, $500, and $250 for 1st, 2nd, and 3rd place prizes for people to come up with the stupidest rules and regulations and bureaucracy that citizens can be forced to follow?