Show Her Mercy: Family Begs Judge To Help Mother Who Killed Her Girl 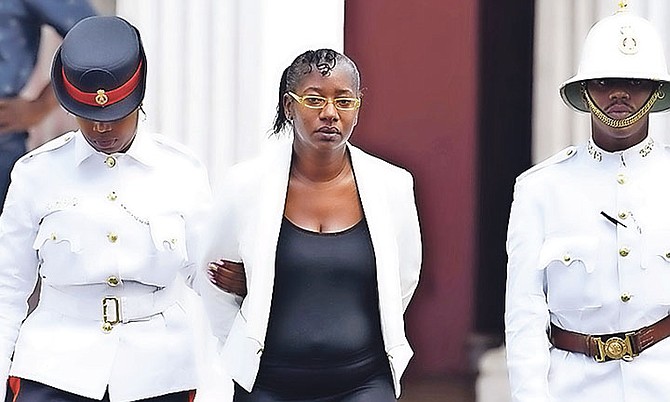 Philippa Marshall at a court appearance earlier this year.

THE brother-in-law of a schizophrenic woman who killed her two-year-old daughter by dousing her with gasoline and setting her on fire yesterday begged a judge not to send her to prison, but to allow her to get “the help she needs”.

John Carey pleaded with Justice Bernard Turner to exercise “mercy” in sentencing Philippa Marshall, claiming that the woman’s mental health warrants “rehabilitation and treatment” instead of “strictly retribution and punishment”.

Mr Carey, who is married to Marshall’s sister, said the woman “did not choose” to kill Philicia Marshall, and is “just as much a victim as her daughter” in the circumstances. And by extension, he said, his entire family have suffered, as not only have they lost Philicia, they stand the risk of losing Marshall to jail.

“We know that there’s a process involved, and justice has to follow its course, but I am asking for the mercy of the court that Philippa is allowed to get the help she needs,” Mr Carey said. “I don’t feel that she could get that in Fox Hill Prison.”

Mr Carey’s submissions came during the sentencing phase of Marshall’s court matter for murdering Philicia by setting the child alight at their Faith Gardens home in December 2017. The Crown is seeking a sentence between 30 to 60 years for the crime.

Prosecutors had asserted that the 41-year-old doused her child with gasoline and set her on fire at their home after “hearing voices”. Two-year-old Philicia suffered second and third degree burns on 43 percent of her body as a result.

The child died in February 2018 at Princess Margaret Hospital (PMH). She didn’t die from the burn injuries, but from an “overwhelming” bacterial infection—klebsiella pneumoniae sepsis—that when tested, was extremely resistant to multiple antibiotics.

That infection, according to forensic pathologist Dr Kiko Bridgewater, likely set in during her hospitalisation at PMH. The lack of an epidermis, or the protective outer layer of skin, made it easier for the toddler to get infected in such an open environment.

As to what actually took place on the night in question, Sergeant Tamika Gibson, who was formerly attached to the Carmichael Road Police Station, said Marshall’s husband Isaac Marshall told her that he fell asleep with Philicia and his two sons by his side, only to wake up the next morning to discover that his wife had spirited the child away to another room and set her on fire at the behest of “demons”.

Sgt Gibson said when she arrived at the residence and gained entry that morning, she observed the entire family in the front room. Mr Marshall and the two boys were on the couch. Marshall was seated on the floor, attempting to put a pink sweater on Philicia, who was lying on a tan blanket next to her. According to Sgt Gibson, Marshall was getting the toddler dressed to go to the hospital.

Sgt Gibson said Mr Marshall told her—in his wife’s presence—that at around 10.30pm on December 27, 2017, he fell asleep on the floor with his two sons, ages seven and three, with Philicia next to him. He said he awoke around 2.50 the following morning, and when he did, realised his daughter was no longer next to him.

Yesterday, Mr Carey suggested that such actions could only be attributed to Marshall’s mental condition, as in the 25 years he has known the 41-year-old, she has never exhibited any “violent tendencies”. And as it relates to her daughter, Mr Carey said Marshall constantly displayed “outright” and “genuine” concern for the child’s safety and well-being.

He referred to a situation that occurred in the days leading up to the incident in question, which took place at a Christmas dinner for their family at the Marshall’s residence. At that time, he said Philicia had started crawling towards a flat-screen television he had installed and mounted on a wall for Marshall’s family. A few wires were hanging from the television, which apparently sparked the child’s curiosity. As such, the baby reached out to grab them.

However, he said Marshall rushed to the baby and stopped her from doing so, and was “very much concerned”. Mr Carey further stated that Marshall turned to him and ask him if he could fix the wires in such a way that they wouldn’t be within the child’s reach “because she didn’t want her daughter to get hurt”.