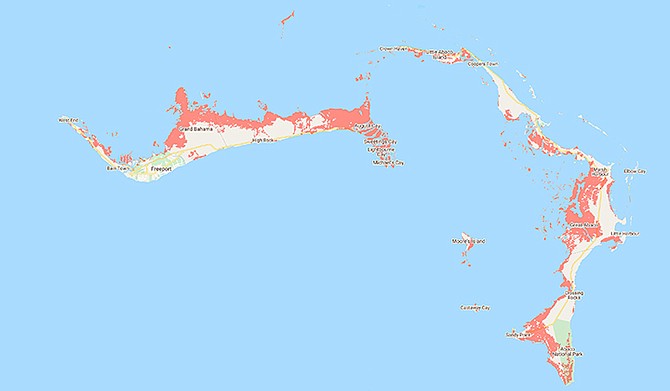 NEW research show rising seas will have worse impact than previously known, with most of Grand Bahama, Abaco and Spanish Wells projected to be under flood levels by 2050 because of climate change.

Much of Crooked Island, Acklins, Andros and Cat Island will be under flood levels as well while the eastern and south-eastern parts of New Providence will be there too, according to projections by Climate Central, a non-profit organisation that reports climate science news.

A projected view of New Providence in 2050 – red areas are 'land at risk'. (Climate Central and Google Maps).

The new model shows that many of the world’s coastlines are far lower than has been generally known.

“The residents of small island states could face particularly devastating losses,” Climate Central reported. “And well before that land is flooded, residents will face saltwater intrusion into freshwater supplies and frequent flooding. In small islands states, as elsewhere, land could become uninhabitable well before it disappears...Sea level rise could also produce humanitarian crises by stripping millions of people of their homes and traditional livelihoods. The developing countries least able to protect their residents through coastal defenses or planned evacuations could be particularly vulnerable—and are responsible for just a small fraction of global emissions.”

In reality, the impact could be worse than CoastalDEM’s models show; its projections optimistically factor in the earth experiencing no more than 2°celsius of warming––the main target of the 2015 Paris Agreement––and that there is “medium luck” so pollution and global warming have weaker effects on sea levels than scientists generally expect, according to Climate Central’s online coastal risk screening tool.

Some good news is that 110 million people worldwide already live in areas below the high tide line and are protected by levees and seawalls.

In their paper discussing the findings, researchers Scott Kulp and Benjamin Strauss wrote: “At the same time, current coastal defenses should not be assumed adequate to protect against future sea levels and storms without continued maintenance and, likely, enhancement.”

“If our findings stand, coastal communities worldwide must prepare themselves for much more difficult futures than may be currently anticipated. Recent work has suggested that, even in the US, sea-level rise this century may induce large-scale migration away from unprotected coastlines, redistributing population density across the country and putting great pressure on inland areas. It is difficult to extrapolate such projections and their impacts to more resource-constrained developing nations, though historically, large-scale migration events have posed serious challenges to political stability, driving conflict.”

In the wake of Hurricane Dorian, which devastated some of the parts of Abaco and Grand Bahama that will be most affected by sea-level rise in the future, some believe the government should place special focus on rebuilding the islands and cays in a sustainable way.

Dr Adelle Thomas, a Bahamian human-environment geographer, said without this the islands will suffer ever worsening consequences from storms.

“We cannot continue with a business as usual approach that has resulted in the devastation seen by Dorian, Irma and Joaquin,” she said yesterday. “There are options to adapt to these changes including eco-system based adaptation, rezoning and hard infrastructure. A well thought out and coherent plan for rebuilding that takes adaptation into account is a necessity to reduce the high risks facing Bahamians. Development of a strategy and effective implementation should be given the highest priority to facilitate safe and resilient rebuilding. Otherwise, we may well see ourselves in a similar position as the frequency of these intense hurricanes occur. The strong science on climate change is clear. Recent reports from the IPCC highlight that small island developing states such as the Bahamas can expect faster rates of sea level rise and extreme sea level events-such as storm surges associated with hurricanes that once occurred every 100 years to occur annually by 2050.”

Prime Minister Dr Hubert Minnis was asked during a press conference on Sunday if Abaco residents will be allowed to rebuild in vulnerable areas or whether the government is considering rezoning or some other plan.

“I think at this point in time this new Ministry (of Disaster Preparedness, Recovery and Reconstruction) headed by (Iram Lewis), an architect and a planner, they will be reviewing those areas and reviewing the whole matter with respect to moving forward and our development for tomorrow,” he said.

What should be most clearly stated is that the same thinking that got us where we are today is not adequate to bring us into the future. We need a complete change in the way we do business. This includes a whole new set of political leaders that actually "get it".

Thank you for your indigenous, Caribbean Skool Lessons on how to extend a Final Solution to all subsequent seaweed and driftwood that emanates from all (to be expected) catastrophic calamitous disasters happening down ..... down there.

In the to be expected; future.

A simple use and knowledge of the English language would suffice. But, to each his own.

I'm not convinced that Ton is human. Looks computer generated. I say Russian or Chinese computer crap! Waste of time.

You related to Tal?

Let's hope K P Turnquest has started budgeting for the cost of constructing and maintaining the many miles of levees and seawalls our country will certainly need. And hopefully his revised budget will also show a generous allocation of funds for the sustained deportation of illegal aliens. Or perhaps we should just turnover the Bahamas to the invading force of illegal Haiti aliens after those of us who can have fled to another country (?!)

Guess we should be nice to Haitians, since their country has a lot of much higher ground. Something we don’t have.

Oh the irony, in a 100 years Bahamians, our descendants will be fleeing by raft to Haiti as our country is swallowed by the sea

It is almost criminal that organizations like Climate Control are permitted to publish as "science" these totally bogus studies predicting never less than catastrophic disasters that serially fail to occur. There is absolutely zero evidence that sea levels are increasing outside the range that has been associated with the phasing between ice ages and withdrawal from ice ages that has been going on for all geological history. If these predictions had a scintilla of actual scientific support, do you suppose that Manhattan real estate would be selling for millions of dollars a square foot, to multi-national corporations which have endless funds to invest in real, scientific research. This is nothing but Chicken Little being given a media megaphone.

@Tarzan: You're just a global climate change denier no matter what, but thankfully there are fewer and fewer of you because of the very visible effects of the changes, e.g. extremely high King/Lunar tides, increased frequency of major hurricanes like Dorian, etc., etc. In any event, the changes are happening and must be reckoned with no matter what may be causing them.

Most Bahamians over the age of 60 will tell you that the sea level today is much higher than it was when they were a child.

Just for you on being a denier, oh BTW I am almost 80 and I have NOT noticed any rises, except my blood pressure

Wow. Talk about ignoring the nose on your face. Stop listening to right wing media. It makes you a fool....

Should it be criminal for you to published your nonsense? You seem unable to put together a string of facts that do exist, whether you like (believe) them or not.

The link will be handy to check out before buying any property, all the expensive land will be swallowed up. Definitely affect tourism and waterfront property values very soon. Waterfront will not be so desirable in a few short years.

... but still government allows hills to be cut down for quarry!

Rising Seas Risk Worse Than Feared during at Cat 5 hurricane

See link below for what should have been The Tribune's lead story yesterday.

Chances survival doesn't sound promising when we out islands comrades has face the factual reality that at least 80% of we colony of out islands is below the sea level, yes, no .... not sounding so good for 40.1 percent out islanders who can't swim .... most 40.1 percent - even if they very life became dependent upon it - can't even float.

This is wrong because it’s saying that most of east end GB is ok. Yeh right.

Be careful how y’all treat da Haitians. Eventually Bahamians May have to run to the mountains of Haiti and Trinidad and Jamaica and other places to avoid rising sea levels