The Department of Correctional Services at Fox Hill. (File photo) 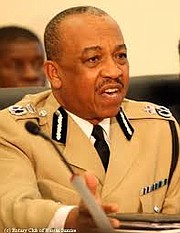 Thousands could be eligible for clean records through the Rehabilitation of Offenders Committee, the new committee Mr Farquharson now heads, he told The Tribune yesterday.

Do you think that first-time offenders convicted of drug possession should get their criminal records expunged?

“Our young people and first-time offenders have been carrying around the burden of records and offences after they have served their time, paid their debt to society and still these records exist against their name,” he said.

“With drugs, which I believe probably has the most offenders among our young people, there are many people who are victims, they have made mistakes and they are now toeing the straight line so we need to accelerate the process of trying to clear their name once they have paid their due debt to society.”

National Security Minister Marvin Dames announced the constitution of the new committee on September 25, saying ex-convicts are discriminated against too often.

This is a part of a package officials hope will include a parole system as the country inches toward a less punitive and more rehabilitative justice system.

Under the Rehabilitation of Offenders Act (Amendment) 2015, people who have committed murder, manslaughter, treason, armed robbery, rape or possessed dangerous drugs with the intent to supply cannot have their records expunged. But after five years most others are eligible if they are first-time offenders or were younger than 21 at the time of their first conviction.

“We need those persons who feel that they would wish to apply for expungement of their records to submit their records to the Ministry of National Security,” Mr Farquharson said, adding that someday he hopes such people could get relief sooner because “five years is a bit too long.”

“I would like to see it come down to three years; maybe they have been convicted for two or three joints and therefore if that person goes straight, after three years they should be able to have that record expunged,” he said.

His committee is awaiting guidelines from the Office of the Attorney General and will host town-hall meetings early next year to engage the public. Once applications are submitted, the group hopes to answer applicants within three to six months, enough time to receive and review reports from three agencies, the Department of Corrections, the Department of Social Services and the police. Ultimately, their recommendations must be approved by the minister of national security.

“If you were to take a poll among young people, a whole lot of them have tried marijuana,” Mr Farquharson said. “Unfortunately, some of them get caught and there are a lot of people who haven’t been caught who may have tried it before so I am particularly interested in the young people and giving them another chance, those who certainly toed a straight line, made a mistake once and therefore to have that record linger against their name, preventing them from getting a job, going to college, travelling, we have to do a better job than that as a country.”

“There was a symposium recently by the Inter-American Development Bank at Baha Mar and it was most educational. There was a young lady who was incarcerated, she was a panelist and she said she still has a criminal record and she talked about being locked up with dope and this was many, many years ago. She learned to do chef‘s work in the Department of Corrections and since then she said she has learned her lesson, having been in no problems and that is an example of a citizen who has tried their best and I think persons of that kind we need to reach out to help and we as a committee will do that.”

As far as cannabis is concerned for small amounts it should be decriminalized point-blank, no one should have to pay anything to society for being caught smoking a joint, they don't for drinking alcohol which is by far much more dangerous.

Finally some sense if creeping in to our injustice system.

... now let's see if it helps the national exam average!

The ‘War on Drugs’ was forced on the Bahamas and other Caribbean countries by the US. It was a way of handicapping young black men in employment and preventing them from traveling or educational opportunities. And if you don’t believe that how many white men or persons in The Bahamas Or Caribbean Neil need to go get drug records expunged? The few young tourists that came and got caught with small amounts of marijuana should have gotten fined and not given a record because most of them were college students. But O, that would’ve affected the way Bahamians were treated before the drug courts. But now the drugs on the streets now have been altered and contaminated and are the most dangerous of all time. So young people should be severely cautioned that having their records cleaned is no invitation to do drugs.

Someone carries a very large chip on their shoulder

Off with their heads !!!! LOL. Just kidding.

Somebody finally woke up and smelled the coffee!

The Bahamas quickly jumped on the failed U.S. "war on drugs" bandwagon. How come we cannot just as quickly follow the U.S. lead in the decriminalization and legalization of pot and simply jump off?

This is a stupid banana republic country with archaic laws, we are over-run by 200,000 illegals mostly Haitians, and a national sport (cricket) that nobody pays any attention to or even knows anything about.

We need to decriminalize and legalize pot, expunge records and release from prison those charged with personal use possession amounts.

AND for GODS sake, stop locking up and charging tourists caught with a few joints!

this is another waste of time and money - if the US see's an arrest for anything other then jaywalking they won't let you in the country they are so paranoid....actually having a criminal record and their being aware of this means that you are too late to try and retract anything with them and every single liar in our gubmint knows this is true - why are they once again wasting time and money on useless laws?