We Are Close To A Deal, Insists University Of The Bahamas 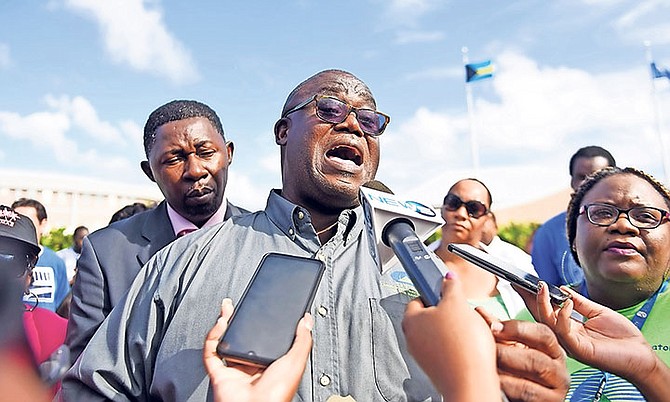 UNIVERSITY of The Bahamas officials yesterday denied claims made by the president of the Union of Tertiary Educators of The Bahamas over delayed negotiations for the workers’ expired industrial agreement, insisting that there have been ongoing attempts to finalise the agreement with lecturers.

In an interview with The Tribune on Monday, UTEB president Daniel Thompson noted that UTEB was angered by the institution’s lack of urgency to finalise an industrial agreement that had expired in 2017.

However, in a statement released by UB, officials said the institution came to an agreement three weeks ago for signing the Industrial Agreement for 2017-2020 on November 10, 2019.

But, as noted by the university, there have been some outstanding issues in regard to financial matters.

“Virtually all terms have been agreed. The one outstanding matter pertains to finances. For clarification, the university, not the government, presented a financial proposal to the union in June 2019. UTEB returned with a counter proposal in August 2019, after the university’s 2019-2020 budget was approved by the board of trustees,” the statement said.

“The university appreciates the sense of urgency in signing a new agreement with the union, especially since negotiations for the Industrial Agreement 2020-2025 cannot begin until this agreement has been signed,” the statement continued.

According to UB, the new agreement will allow for “significant growth and expansion of the university’s academic offerings and provide competitive salary scales to specialised faculty”.

Additionally, it will allow for the operation of the Academic Senate and the Union of Tertiary Educators of The Bahamas to exercise their respective roles in helping to strengthen the university.

UB officials also denied claims that the institution was hiring a new executive.

UB statements to the press came mere hours before UTEB members demonstrated outside the university.

In fact, speaking to reporters at UB’s entrance yesterday, UTEB members noted that the university’s response to the issues highlighted by the union was “somewhat disingenuous”.

In his address, he also reiterated that members felt “insulted” by UB’s proposal to increase their salaries by a meagre 82 cents per day.

According to Mr Thompson, the last time lecturers received an increase in pay was some nine years ago.

When asked how much members expected to receive from the university, Mr Thompson replied: “We’re looking at basically a modest seven per cent increase across the board and a modest compensation of about to $3,500 to $4,000 a year as a compensation for our back pay because our agreement has expired since 2017.”

The union’s demonstration yesterday, as noted by Mr Thompson, represents the first set of actions to be taken by lecturers if issues are not soon resolved.

“We are confident and we believe that in academia where integrity, honesty, is paramount in what we do. We are confident that we will reach an amicable solution,” he continued. “Let us finalise the industrial agreement so that we can begin the process of hammering-out the actions and activities that our academic senate and UTEB will engage. We are already in the third year since our IA expired.

“Let us bring industrial harmony and goodwill to our national university as we move forward, upward and onward.”

How much money they are paying Marissa Smith? She is now triple dipping on the Public Purse. Pension and Golden handshake from her last job with BPL , Pension from Government and now salary from the University. Wow. Is this right, fair and justifiable?