Stateside: Dates In History Which Still Echo In The Halls Of Power 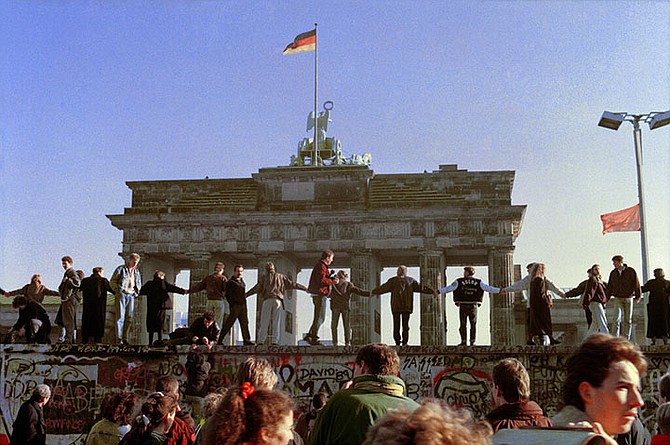 Berliners sing and dance on top of the Berlin Wall to celebrate the opening of East-West German borders in Berlin on November 10, 1989.

It has been a week of political anniversaries in the US and this coming Saturday marks the 30th anniversary of the fall of the Berlin Wall.

Powerful forces in both East and West Germany, elsewhere in Eastern Europe and in the Soviet Union all contributed to the dismantling of the Wall.

When it fell it seemed to both symbolise and accelerate the collapse of post-World War II Soviet Russian hegemony over Eastern Europe.

The Soviet Union soon afterward imploded and from its wreckage emerged 15 newly independent ethnic states that retain to this day their political autonomy and UN membership. Most of these former Soviet republics also maintain a strong economic relationship with Russia and with that, a susceptibility to pressure from Moscow. A few have actually gone to war with Russia over various territorial disputes, with Ukraine the only one presently in active combat with Moscow’s military forces.

Back in 1989, George HW Bush was the American President. Though the Soviet Union’s collapse occurred during his time in the White House, most contemporary commentators and subsequent history books have given credit for the Soviet implosion to Ronald Reagan, Bush’s predecessor for eight years ending in January 1989.

Reagan, an unabashed and enthusiastic competitor with the USSR for world political hegemony, was a big fan of big American defence budgets, and many observers felt his profligate spending on expansive new weapons systems and other conservative military priorities essentially drove the Soviet Union into bankruptcy as it vainly attempted to keep up with Reagan’s spending zeal.

Presiding over the end of the USSR was President Mikhail Gorbachev. He was also the General Secretary of the Communist Party of the Soviet Union. Gorbachev is still alive, reportedly wealthy and has been episodically engaged in Russian politics. This Nobel Peace Prize winner actually ran for president of Russia in the 1990s. He has sometimes been critical of current President Vladimir Putin.

Reflecting on the dramatic events of 30 years ago, Gorbachev wrote the following for Time magazine:

“(In 1989) we drew a final line under the Cold War. Our goal was a new Europe: a Europe without dividing lines. The leaders who have succeeded us have failed to achieve that goal. A modern security architecture, a strong mechanism for preventing and resolving conflicts, has not been created in Europe. Hence the painful problems and conflicts that beset our continent today.”

Wise words to be sure. But no one in either Washington or Moscow seems to be listening.

Monday marked the 40th anniversary of the seizure by radical Iranians of the American Embassy in Tehran. The assault and subsequent occupation of the embassy took place in the context of the collapse of the American-backed Iranian monarchy and its replacement by the present theocratic regime led by a succession of orthodox ayatollahs.

Over 50 Americans were held prisoner in their embassy for 444 days. The occupation ended at almost exactly the moment Ronald Reagan took over as president after defeating Jimmy Carter in the 1980 US presidential elections. Carter’s feckless inability to break the embassy siege contributed to his reputation as an almost impotent leader of the world’s strongest nation.

US resentment of the embassy occupation has simmered ever since. Obama’s nuclear deal with Iran was supposed to reverse that, but Trump quickly pulled the US out of the agreement, and Iran remains atop the American list of international bad actors. Regular notices are issued by the Departments of State and Treasury of new additions to the US list of Iranians and their allies whose misbehaviour has led to imposition of economic sanctions and other restrictions on them and their families.

US President Trump regularly vilifies Iran and its leaders, and there is little evidence that the deep freeze in relations between Washington and Tehran will thaw anytime soon.

Speaking of Trump, which everyone in Washington does, all the time, consider this: The US president leads the nation during a period of still very low unemployment, largely healthy stock prices and slowing but still significant overall economic growth. Whether you like his campaign promises or not, he has tried to keep them far more than have most politicians. If he could keep his mouth shut and his Twitter finger from twitching all the time, Trump might coast to re-election.

IN Washington, the hometown Nationals baseball team won the World Series last week. This was the first baseball championship for the city in nearly 100 years, and it produced a lot of local excitement and welcome distraction from the simultaneously exciting but almost monotonous reality of Trump, dirty politics and impeachment.

In winning their championship, the Nationals made history in several respects. They won all four road games in the Series, as did their opponents, the Houston Astros. That had never happened before. The Nats staged dramatic late-inning comebacks in many games throughout the 17 games of their playoff triumph over four different teams.

In addition to the Astros, regarded by many as the Goliath of baseball over the past several years, the Nationals also vanquished the heavily-favoured Los Angeles Dodgers, who had appeared in the past two World Series.

The Nationals had a big victory parade down Constitution Avenue in Washington on Saturday on a clear, pleasant November day. Then most of them attended a hastily-arranged visit to the White House on Monday. The event was boycotted by some of the team’s stars as a protest against Trump’s immigration and other policies, but most of the players and all key members of the ownership and management attended.

MLB players overall might be the most conservative group of professional American athletes, and a couple of the Nats players offered heartfelt endorsements of Trump during the team’s White House visit. This may have reassured the president, because he was forced to endure a rare public rebuke a few days earlier.

Trump had attended the fifth game of the World Series in Washington, and when he was introduced, a full-throated cry was clearly audible from the sellout crowd: “Lock him up.”

On Tuesday, as expected, Democrats regained complete control of the Virginia state government for the first time since 1993. The Dems swept back into control of both houses of the state legislature.

One voter north of Richmond told the Associated Press that “we didn’t want to make (Trump) the only reason we came out to vote, but he’s a baboon. We travel a lot, and everywhere we go, we are embarrassed.”

A Democrat also won the governorship in Kentucky, but this doesn’t portend electoral defeat for Senate majority leader Mitch McConnell as he seeks to retain his seat in next year’s general election. The incumbent GOP governor was personally unpopular in this deep red state and had chosen not to accept federal Medicaid money as part of his doctrinaire resistance to Obamacare, adversely affecting the health benefits of many thousands of his constituents.