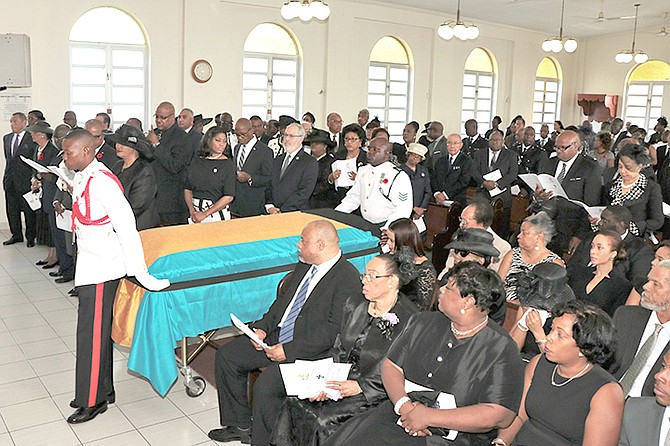 Cabinet ministers, leader of the opposition, parliamentarians, the diplomatic corp and scores of well-wishers gathered at Rhodes Memorial Methodist Church for a service of thanksgiving to celebrate the life of Mr Johnson who died on October 24, 2019 at the age of 72.

Mr Johnson who was born in Hatchet Bay, Eleuthera, became the first black person to anchor the midday news of The Broadcasting Corporation of The Bahamas; from that time, he made his way through the ranks at ZNS Bahamas. After his broadcasting career he served as a senator from 1992 to 1998 on the advice of his friend and political mentor Sir Lynden Pindling. In 2013, he was appointed High Commissioner of the Commonwealth of The Bahamas to Canada.

Senior Pastor of Mount Tabor Church and friend of Mr Johnson, Bishop Neil Ellis told the congregation that Mr Johnson was a man from humble beginnings who rose to national prominence by securing his place in history and successfully carving out a spot for his legacy.

Bishop Ellis explained that a high point into his career was to lead the corporation into the inauguration of the first television station in The Bahamas and to give Her Majesty, The Queen Elizabeth II, a guided tour through the new facility.

Bishop Ellis said: “From Hatchet Bay, Eleuthera, he moved to Nassau, to the newsroom of ZNS to the first Bahamian anchor of the midday news to travelling around the world covering the Prime Minister of The Bahamas to launching the Northern Bahamas radio station to overseeing the opening of the national television station and to becoming general manager of The Broadcasting Corporation, he was an exceptional Bahamian.”

In paying tribute to Mr Johnson, former Consul General to Washington, Paulette Zonicle said she knew Mr Johnson as “big brother”, who helped to guide her career. Thirty-six years ago, she was introduced to Mr Johnson by Edison Key who was Chairman of The Broadcasting Corporation of The Bahamas at that time. Ms Zonicle said: “I went to Mr Johnson to do the interview and at the end of the interview he (Mr Johnson) asked me to produce all my documents. I told him that while I graduated from college, I did not have my degree in hand because I had a small balance at the university. He said to me, I appreciate your frankness and honesty and I understand your dilemma. Being the practical and compassionate man that he was, he immediately offered me the job and allowed me to commence work and gave me 6 months to show my degree.”

Ms Zonicle said that Mr Johnson was overflowing with knowledge and would quiz her every week. She reflected on his time at ZNS, saying that even though he was kind to her and many others, they still revered him.

Minister of National Security Marvin Dames speaks at the service.

She said: “We knew if we stepped out of line, we were in deep trouble. I can hear the late Yvonne Hall calling out in the newsroom ‘Johnson comin’!’ and we would all ready ourselves in front of our typewriter in preparation for whatever may come. But he was also a soft-hearted person. While he exuded a hard exterior, he was a compassionate person.”

Minister of National Security Marvin Dames brought condolences on behalf of the government and the people of The Bahamas. Mr Dames said that Mr Johnson created his own path and blazed his own trail. Dames said: “The country has lost a statesman, but you have lost a husband, a partner in life, a husband, a father and a mentor. The tributes and accolades since Dr Johnson’s passing may be only but a small consolation of the deep admiration and respect many had for him, please find comfort in knowing this. American poet and essayist, Ralph Waldo Emerson is credited with penning this quote - Do not follow where the path may lead, go instead where there is no path and leave a trail.”

Off he goes we colony's Comrade Broadcaster General. Calsey, do let me know when you're all settled and goin be on with your talk show streaming from the heavens. Dear friend and former colleague, I'll be watching for your eternal live on air light switch on.... You were a much trusted sweet friend!