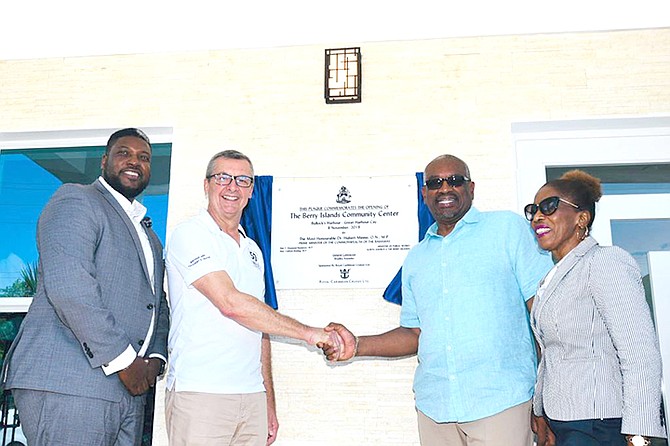 Great Harbour Cay, Berry Islands – Prime Minister Hubert Minnis officially opened The Berry Islands Community Centre and participated in the Ambulance Dedication at Bullocks Harbour, Great Harbour Cay, on Friday. The facility previously sat unfinished for many years, but a new partnership between Carlton Bowleg, MP and Royal Caribbean Cruise Lines resulted in the completion of the Centre, which will double as a Hurricane Shelter.

The ambulance was also funded by Royal Caribbean.

A local contractor completed the Centre, which includes a computer room, a study room, a kitchen and meeting area, and will be used to host many local, public and private events.

“Today is a celebration of the community spirit of the residents of the Berry Islands and Great Harbour Cay in particular. This is also a story about resilience, about fortitude and about never giving up on a dream. Congratulations and thank you to Royal Caribbean and everyone involved in this project, including every resident of Great Harbour Cay who helped to turn this dream into an example of what can be done through unity and collaboration," said Prime Minister Minnis.

During the event, Royal Caribbean International's President and CEO Michael Bayley announced Royal Caribbean's sponsorship of the Music Makers Junkanoo Group with a $100,000 cheque presentation. The cruise company also presented a cheque to the Fox Hill Congos for $20,000.