Insight: There Comes A Time When Enough Is Enough And Better Examples Must Be Set For Women In Politics 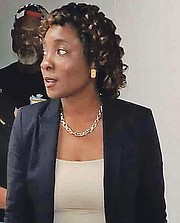 This week, we took a journey into the realm of oddity – led by our friendly tour guide, Minister of Youth, Sports and Culture Lanisha Rolle. The general consensus by most citizens who would have taken a gander at the commemorative medals awarded to youth parliamentarians - which on one side depicted the coat of arms, and on the other side contained a picture of the minister herself – was that this must have been a terrible joke.

Surely, we are no stranger to seeing renowned Bahamian public figures commemorated on our currency. Neither is this a strange practice in other countries that also honour heralded figures in society by portraying them on local currency. However, not only has the good minister not paid her dues yet, but it was seemingly done in poor taste, as it looks like nothing more than an ego trip.

Embarrassing as it was, Dr Minnis denounced the move in Parliament and said she will be forced to pay for the medals, as the government will not be responsible for paying for anything that was “personalised”.

Still, however, the prime minister’s janitorial shift would not end there, as Mrs Rolle’s stunts continued to make a mess of the people’s business last week.

Over-riding the authority of the Junkanoo Corporation of New Providence (JCNP), with nearly a month before the Boxing Day Parade, Minister Rolle approved the application of The Immortals, a new group she insisted be allowed to rush in the Boxing Day and New Year’s Day parades in the B Division – despite the fact the group did not register with the JCNP. Needless to say, this was not well received by the corporation.

With the JCNP firm in its stance that the new group would only be able to participate as a fun group, tensions rose, with the minister fiercely unwilling to back down.

Lo and behold, Dr Minnis again had to smooth tensions after another fire was created by Mrs Rolle.

Having to steal time away from more pressing matters such as debating the Disaster Reconstruction Authority Bill, the prime minister said in reference to the Junkanoo issue: “The decision is the Junkanoo will not change at this particular time. We are moving into the Junkanoo season.

Mature and sensible, wouldn’t you say?

Now, as you may be wondering: Why are we giving airtime to Mrs Rolle’s antics?

In March 2018, Reece Chipman was axed as the chairman of the Antiquities, Monuments and Museums Corporation, not even a full year after being in the post. The reasons that we learned behind this ordeal was that Mr Chipman apparently wasn’t getting along with staff.

Mrs Rolle, whom we have heard about in many circles, did not get along with staff at social services - the ministry which she had oversight of when she was initially selected as a member of Minnis’ Cabinet. Instead of being asked to resign, she was moved in a Cabinet shuffle which ended up with her landing at the ministry of youth, sports and culture, Frankie Campbell replacing her at social services, Renward Wells taking over the ministry of transportation and Michael Pintard assuming responsibility for the ministry of agriculture.

Perhaps the logic was sound. Who doesn’t love culture, sports and youth?

One of the three can surely get a smile out of the most melancholic personality. Right?

Unfortunately, Mrs Rolle is putting that to the test.

And with the JNCP reaffirming the difficulty of working with the minister, one has to wonder why Dr Minnis even chose to make her a member of his Cabinet in the first place.

Certainly, there is no trait that signifies her as a rising star in politics. Neither is there any statistic that we’ve seen which validates her as being worthy of leadership.

Rather, when more pressing matters are at hand, she is recklessly making distractions and having the prime minister clean up her mess.

Clearly, she has not presented herself as fit to lead this ministry or any other for that matter.

Moreover, this is part and parcel of what many young Bahamians are turned off by in politics – this necessity to surround one’s self with people who may not necessarily be good enough for the job, but rather, it’s either for a favour returned or sought after. Who knows why the prime minister continues to bail her out?

As we look at the gender imbalance in Parliament, a standard must be upheld for women in Bahamian politics. They are our mothers, wives, daughters, sisters, and we fully believe in their capability to lead. However, at a time when young girls can use more role models, Mrs Rolle’s temperament has been disappointing on too many occasions.

Mealy mouth doc. keeps her close no matter what she does. Others have suffered more for less.

she is no doubt the favored one. What office will she hold next??. doc inquiring minds would like to know.

Please, Comrade Reporter Malcolm, the colony's prime minister is not man's known putting his own babies bed - much less the minister's $582.40 baby, Do tell, exactly, what baby was put bed by the PM's, just asking for the $582.40 payback by the forever and beyond embattled in controversy minister - of which some her many controversial babies have grown taller since her ministerial appointment .... This is one ministerial Medal baby that you just can't make up, just can't

So y’all saying someone banging that lol

or was... word on the street is that the newly powerful remembers those who once rocked... they have kept their secrets and remain loyal. That's how DnP Diplomacy works.

The People's Time. Nobody ever said what people.

Women seem to be getting lots of charges these days: forgery, embezzlement, fraud etc etc

She is certainly not a politician I use as reference with my two daughters. Her name is not used in our house. I don't want them to even google her. Poison!