Insight: Why Girls Must Find A Passion And Pursue It 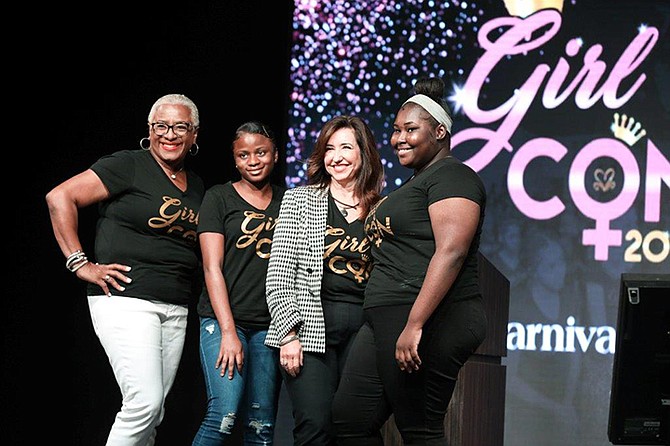 Ms Duffy, who became president of CCL in 2015, was this year’s keynote speaker, sharing with the students how “Taking the Unconventional Path” fuelled her career from being a receptionist in the travel industry to now president of the largest cruise brand in the global cruise market.

Due to the devastation wrought by Hurricane Dorian, Girl Con founder Senator Katherine Smith thought it would be almost impossible to stage the event this year. The previous venue, the Regency Theatre, sustained severe flooding and extensive damage.

She commended Ms Duffy and the members of Carnival Cruise Lines, including Mr Giora Israel, for hosting the event on board the Glory during its arrival at Freeport Harbour on Wednesday morning.

The theme for this year’s conference is, “When Your World Changes.” In attendance were Patricia Minnis, the wife of Prime Minister Dr Hubert Minnis, and Sarah St George, acting chairman of the Grand Bahama Port Authority.

Referencing this year’s theme, Ms Duffy told participants that Hurricane Dorian is a reminder of how quickly and how dramatically things can change.

But, she said Carnival Corporation continues to stand in support of the Grand Bahama and has resumed sailings to the island.

“It certainly took a toll on the people of GB, and all of us at Carnival Corporation stand beside you, and we did what we could to support you in the moment,…but what is most important is that…we are here to support and work with you in partnership for the long term.

“It is my first day back since the hurricane and it is incredible to see how much is being worked on and restored. And guests on our very first cruise that came back had very high compliments for the people, and the energy and care and happiness they felt from people of GB,” she said.

“Just last week I was in Venice, Italy, to pick up ship number 27, the third sister to the Carnival Vista-class, and that ship left Italy and is making her way to Long Beach, California, where she will be home-ported,” she said.

As the first woman to serve in the position, Duffy took a more unconventional approach than her male predecessor, visiting each of the 24 ships at that time to meet and connect with Carnival employees.

“When I was named president there were some sceptics; I was an unconventional choice for this role, and I did not have all the typical criteria to run the world’s largest cruise line. But Arnold Donald, our corporate CEO, and my boss is a big believer not just in diversity, but inclusion.”

“And during my first year as president, I visited every one of the 24 ships at the time, not to inspect, but to connect. And that is a big difference in the orientation that women bring to leadership.”

The executive said that in the beginning, she knew early on that she wanted a career in the travel industry. However, when her dream of being a Pan Am flight attendant did not pan out because she failed to meet the 5-feet, 4 inches height requirement, she decided to take a job as a receptionist at a small the travel agency in the 1980s.

She later took a position as a travel agent working on commission, and worked her way into management, growing the company over the next 20 years from 25 to 500 employees.

“I earned ownership in the company, and in 2001 we sold the business, and at the time I had become president of the company,” she said.

Duffy stayed on with the new company Merritts - one of the largest performance improvement companies in the world based in St Louis, Missouri - and within three years became the first women president and CEO in the company’s 110-year history.

“When I showed up in St Louis, I remember the guys said to me, ‘I don’t know what you are doing here, we bought you. Well, those guys did not stay around very long,” she said.

And while she was made to feel interior by some men, she also noted that every opportunity that came her way was because of men who gave her the opportunities she had for each of the positions.

According to Duffy, after being at Merritts for a while, she was recruited to become President and CEO of the Cruise Line International Association (CLIA), the trade organization for the global cruise industry, based in Washington DC.

“I had no experience running a trade association or lobbying government, but the skills that I needed for that job had been put to the test very quickly after I joined CLIA when tragedy struck in one of Carnival Corporation’s brand ship that ran aground in Italy and 32 people died,” she recalled.

That experience and dealing with that terrible crisis, she stated created a lot of change in the industry.

“We were, obviously, under a lot of scrutiny and I was in the front row, testifying before the US Congress, and in Australia,” she said, which she feels prepared for her position at Carnival.

In 2015, Arnold Donald had become the CEO of Carnival Corporation and asked Duffy if she would be interested to put her name in the hat to be president of the Carnival Cruise Line.

Duffy told the girls many women before them have had to deal with peer pressure to fit in, to be appropriate or to follow trends to be cool. But she told them that today the world is more open to diversity and different ideas and that they do not have to fit in a certain mole to be successful.

The cruise executive encouraged the students to be like the trendsetters who break the mole. “Has anyone received a Noble Prize for conformity?” She asked.

“So, when life throws curveballs, remember swimming upstream is great exercise. You need to find mentors and people who believe in you and help you swim that much faster.

“Don’t wait for people to give you opportunities, look for them yourself, and rather than resenting that maybe we have to swim a little harder because we are women, look at it as it is giving us the extra muscle to build your skills to become a stronger leader.”

She told them while she had taken the unconventional path that led her to be president of Carnival, maybe the path for them could be starting their own business, the opportunity to go back to school, or trying something completely different, and sometimes summoning the courage to quit the job they hate and start over to do something they love. “That is the beauty of taking the unconventional path,” she said.

She left eight fundamental principles she feels could help the girls on their life’s journey. They are:

Find your passion and pursue it.

Get out of your comfort zone.

Get involved – sit in the front row, raise your hand.

Always take window seat – being focused on the journey

Aspire to inspire others

Give Back and Pay It Forward

Never assume people know your capabilities or value your contributions solely on merit, and

Be an advocate not only for yourself but for your peers.

She noted that life may not always be what they expect it to be. “It is unpredictable but interesting and rewarding; it can also be hard, disappointing, and especially unfair, but at the end of the day learn from everyday opportunity and don’t assume your career is in someone else’s hands, own it, live it, and pursue your dreams,” Duffy said.