‘Sonny Boy’ Memorial: Boxing Fans Get Their Money’S Worth 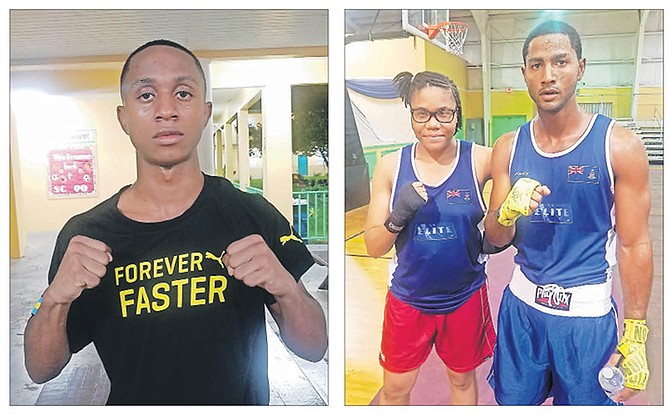 The Bahamas Amateur Boxing Federation’s four-country showdown in the first Wellington ‘Sonny Boy’ Rahming Memorial Amateur Boxing Show didn’t come off as planned, but the fans got their money’s worth with the five bouts staged.

With Haiti and the United States skipping the trip here, it came down to a one-night showdown on Saturday at the Anatol Rodgers High School Gymnasium between the Bahamas and the Cayman Islands and two exhibition matches between local boxers.

Vashan Johnson was the lone Bahamian successful in winning his fight against a visitor, while Hepseba Angel and Jon-Mikol Rawkins taking victories home to the Cayman Islands.

In his bout, Johnson got the better of his match-up against Charlie Nixon as he came on strongly at the end of the first round and carried it over in the second round. As a result of Johnson’s assault on Nixon, Cayman Island’s head coach Floyd Trumpet threw in the towel signifying the end before the bell sounded.

“It was very exciting. It was good to know that all of my hard work was put to good use because I was working very hard,” said Johnson, who made his successful debut. “All of my blood, sweat and tears and sacrifices paid off because I got 100 per cent in the ring.”

Johnson, a 16-year-old 12th grader at Temple Christian High School, said he just wanted it a little more than his opponent and that was why he went after him from the first round. He said he expected the stoppage because he was fully prepared to do whatever it took to win.

Getting an early 19th birthday present when she celebrates on December 2 in the Cayman Islands, Angel said she didn’t come all the way here to lose. She had a tough battle with Elizabeth Hutchinson, but landed a few more punches on the computer to secure the win and spoiled the debut of the Bahamian.

“It was great. She put a lot of pressure on me,” said Angel, who competed in just her second bout. “It was kind of different because I didn’t have my family and friends here like I did when I was home for my first fight. So I had to do it here for them.”

And Rawkins, thankful to God for giving him the ability to compete, said he expected to put up a much better defence, but after he stopped Long Island’s Stephen Fox in the first round, he felt he accomplished his mission in coming here.

“I actually expected to stop the bout earlier,” said Rawkins, who used the event to prepare for his participation in the Caribbean Amateur Boxing Championships from December 5-9 in Trinidad & Tobago. “If my defence was better, I could have won it earlier. But I’m pleased that I still got to stop him and win it.”

The 24-year-old is coming off a two-year hiatus when he started eight months ago. He didn’t look like he had any ring rust.

Trumpet said although they brought five boxers, they were pleased to get in three fights and come out with a winning percentage.

“My main focus for this fight was to get some experience for my boxers,” said Trumpet, who only took over the programme in the Cayman Islands this year after he served previously as the head coach for Trinidad & Tobago. “I think the boxers who competed did well. I wanted the other two girls to compete, but they didn’t have any opponents for them.”

Despite winning just one of the international match-ups, Bahamas’ head coach Keishno Major said he was still pleased with their overall effort.

“I was impressed with the work ethic that they put out,” he said. “We just have to continue to work on our conditioning. Amateur boxing is a sport where you don’t have much time to get off a lot of punches, so you have to start working as early as possible and the only way we can do that is to be in better condition.”

In one of the two exhibition matches, Bahamian Olympic hopeful Lennox Boyce got off to a slow start, but once he got into his rhythm, he went on to out-box Arlington Munroe in his debut.

“I actually was training for a fight, but it was only an exhibition so I just showcased some of my skills, which was my control and being able to mix it up with my opponent,” Boyce said. “He showed a lot of heart. Once he continues training, he should have a great career ahead of him.”

Boyce, however, said he’s still targeting the 2020 Olympics in Tokyo, Japan, but if he’s not successful, he will work towards 2024.

“Every week, I’m just focusing on my stamina and improving my technique,” he said. “That was some of the things I saw in this exhibition, minus the combinations.”

Next weekend, 19-year-old Boyce hopes to travel to Orlando, Florida to participate in the Sugar Bert Tournament before he heads to the Caribbean Amateur Boxing Championships.

Federation president Vincent Strachan said their goal was to bring an international amateur boxing tournament to the Bahamas and, at the same time, expose the new core of officials that they are preparing to carry in future local and international events.

He noted that they brought in James Beckles, a level III certified referee and judge from Trinidad & Tobago, who conducted two days of training. The group of local officials were then given the opportunity to officiate in the tournament.

“Tonight you saw a group of officials who did remarkably well. I don’t have to go into the ring and officiate anymore,” said Strachan, an international certified referee/judge. “We have the officials here right now and we will continue to build our coaching and officials core because this will give them the opportunities to move to the next level.

“Once these officials and coaches have that knowledge ingrained in them, you can certainly see better results from what we put into these boxers. At the end of the day, if you don’t have a good officiating core and a good crop of coaches, your programme will not go anywhere.”

Strachan said he was particularly pleased that they had one candidate from Andros, three from Inagua and even former boxers and current ones all participated in the clinic.

Although they didn’t have the teams from Haiti and the United States come in to participate, Miller said the tournament was still a resounding success because they got the referee/judges course off and they had a few matches contested.