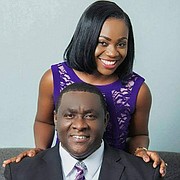 Daniella and Ryan survived Hurricane Dorian and are now heading back to Abaco.

Today is a brand new day for Daniella Forbes and her family. Whereas thousands have fled Marsh Harbour, Abaco with no intention of returning, she and her husband believe they are being called by God to return and establish a church there.

For the harrowing experience they endured, it only could be a large dose of faith that would make them return to the scene of the nightmare. But ten weeks and two days after that nightmare began, they are looking on the side of hope as they will return to Abaco today.

Daniella told me that prior to the arrival of Hurricane Dorian, life for her family was on the bright side. Her husband, Ryan O’Neil Forbes, had been inducted as the senior pastor of First Assembly of God, Marsh Harbour, this past April. She was six classes away from her associate’s degree in early childhood education. Their sons – six-year-old Ryan Matthias and four-year-old Alexandre Cecile were doing well in school. They were making future plans to move out of the one-bedroom apartment they were living in above the church.

Daniella and Ryan met in Abaco, where they were both born and bred. Ryan is from Treasure Cay. Daniella is of Haitian descent. Her mother is from a shanty town known as Treasure Cay Farm, and she is one of six children. She got a job as a nanny straight out of high school, working for an immigration officer. Ryan was doing maintenance work for the officer. When he initially showed interest, Daniella wasn’t interested because he was much older than she. However, her boss mentioned that he was a Christian, like she was, so she decided to give him a chance.

By December of 2012, Ryan gave Daniella a promise ring as he was about to move to Nassau to attend Assemblies of God Bible School in pursuit of an associates degree. By March of 2013, they were married and Daniella was living in Nassau with him. They remained in Nassau for a few years. During that time, they had two children. Daniella took college prep classes at Bahamas Baptist Community College, and also took an early childhood education course with Agatha Archer. She worked first at One on One Pre School, and then First Step Academy. Ryan became the youth pastor at Bethany Assembly. She had been working at First Step for nearly two years when Ryan told her he felt a ‘tug’ – that their season in Nassau was over and it was time to return to their home island of Abaco.

They returned to Abaco and lived with his sister-in-law for a while. Initially, she worked as a waitress. Fast forward to 2019, they made First Assembly their home. Daniella was leading the children’s ministry and she was a part of the women’s ministry.

When she heard of the imminent storm, Daniella didn’t feel too good about it: “I had a dream that we were going to lose everything in the storm. I told my husband about it; but we joke a lot, so he thought I was joking. I spoke to his mom and my mom and I told them about the dream. They tried to convince him to leave Marsh Harbour and go home to Treasure Cay. But he said that we faced Hurricane Floyd, a Category 4. He said whatever happens, we would prepare for the storm and clean up afterward. I didn’t feel that way, but I did what I had to do to prepare, and I put our important documents in a Ziploc bag.”

When Hurricane Dorian came, it was nothing like what the Forbes or anyone else in Marsh Harbour expected. It was significantly worse. The church - and their home - is opposite Price Right in the heart of town, right where the eye of the worst hurricane to hit The Bahamas in recent history landed. They were not the only occupants of the building. There was another family living in an apartment on the other side, and a gentleman lived next door to them. Once the storm began, a man came running there for shelter from the Mudd. He took occupancy of an empty room, and they shared blankets and food with him. As the storm began to rage, the two men kept company with the Forbes, deciding it would be better not to stick this one out alone.

Daniella and Ryan’s house was destroyed by the storm.

“It was a Sunday morning, so we decided to have church,” Daniella told me; “I did the welcome, my husband read from Psalms 46, and even my eldest son participated. My husband was preaching and preaching. He was saying, ‘The Lord is our refuge our strength and our fortress. In Him will I put my trust’. The waters were rising and the ceiling started to shake. Everyone was praying and worshipping. We heard a bamming. A man who lived on the other side said his roof was gone. My husband opened the door and pulled him inside, but the wind got in, and a part of our kitchen was gone. I took the children in the closet and I started to pray. I heard bamming again. It was the Pratt family, the family of five that lived on the other side. They were making a hole in the wall to get to our side. Their roof was gone and the floor was going. First, they pushed the children through the hole. Then they made the hole bigger so they could come through. The roof in the bathroom was gone.

“We collected every canned good we could find in the house. Our mattress was wet but we let all of the children sit on it. We got a bucket to use the bathroom. The storm returned and we started to pray. We were praying ‘peace be still’ and saying, ‘Lord, have mercy’. But it seemed the more we said ‘peace be still’ the more the storm was raging and raging. Everyone aborted mission as the walls started shaking. The children couldn’t sit on the mattress anymore. They had to use it as shelter, because the roof was gone.

“Everyone was holding on to one another like a chain, and we nested the children in the middle. Everyone was shouting. We were crying ‘Lord, have mercy!’ But the storm got worse and everyone was flying separate ways. My boys and I were leaning on a wall, but the wall was shaking so hard. The wall gave way so I pushed my boys and shouted, ‘save my boys!’ because I thought I was going to die. But Mr Pratt pulled me. Something fell on our heads and I heard someone shouting, ‘Hold on! Hold on!’ Things were flying about and it was a miracle that nothing really hit us and hurt us. The children were crying and asking, “When is God going to save us!’ But I didn’t know… because I thought I was going to die. The enemy put doubt in my mind, and I saw all these dead bodies. Later I found out there were dead bodies all around.”

“I saw death. I tasted death. I looked death in the face. I repented right then and there. I said if I die, I die; but if I live, Lord, I will live for you. I think everyone prayed that prayer in there. Dera, the Pratts’ 19 year old daughter, she was strong and she prayed powerfully during the storm. When the storm died down, there was silence.

“This was just the first half of the storm. During the calm (the eye) the water was going down. There was about 11 feet of water. When the water went down, we crawled through a hole in the floor and crawled into the church. We sat on top of the children’s tables in the children’s ministry. The storm started to rage again. We were cold, hungry and shaking, but none of the children complained. They stuck it out.”

Now, living for Christ even more is exactly what Daniella and her family intends to do as they head back to Marsh Harbour today. They have already secured an efficiency to stay in and shipped essentials on the mail boat.

“At this point I don’t really know exactly what I am going to do or where life is going to take me, but I am taking one day at a time,” she said, adding that she will home school her boys for the time being.

I met Daniella through a special event held just for female victims of Hurricane Dorian this past weekend. Sixty five women were hosted to a seminar called: “Women in Transition – a Ray of Pragmatic Hope” hosted by SMART women. It was designed to lift the spirits of the survivors and give them practical information to “change their horizons”, according to Dilette Miller. The programme included the statement of purpose of SMART Women, by attorney Cheryl Bazard, Minister Charlene Paul, and HR expert Marisa Mason Smith. Dr Cleopatra Williams of Life changers Ministries shared moments of inspiration. SMART Women president Nicole Leary spoke on “Tips for Presenting your Best You”. The women were also engaged in sessions on: interviewing skills; resume writing; smart financial products and services; budgeting on a shoestring; and mentoring and networking opportunities.

SMART Women served lunch, then gave out ‘smart dollars’ to the participants, which allowed them to shop in their boutique. The boutique featured business suits, shoes, make up, bags and other essentials to help the ladies look and feel their best as they rebuild and recover after the storm.

Daniella was able to take home a business suit and jewellery, and she spoke highly of the session and presenters, calling it beneficial and inspirational.

The Zonta Club of New Providence invited SMART Women to participate with them in a series of events during November and December, all surrounding the UN-sanctioned “16 days of activism” to end gender-based violence around the world. They are also receiving support from the Ministry of Social Services. The Department of Gender and Family Affairs Director Dr Jacinta Higgs and officer Simone Bowe participated in the event. This is the first in a series of events surrounding the activism efforts. Keep up-to-date with the events by following the groups’ social media pages. There were Haitian interpreters on-hand to ensure that all survivors who attended could benefit.