I Never Asked Ash For Money. He Wanted To Give To Plp 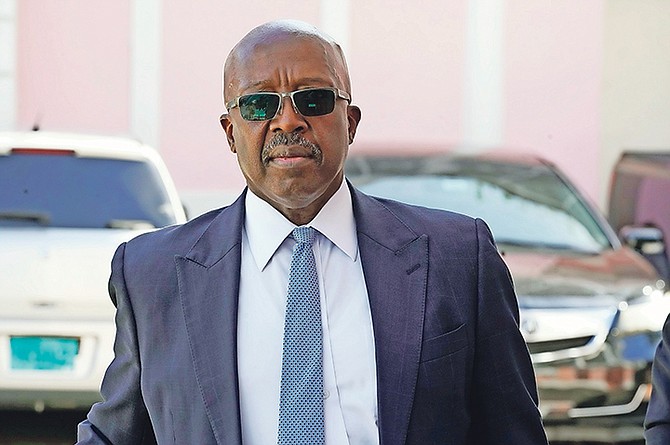 FORMER Cabinet minister Shane Gibson denied soliciting thousands of dollars in bribes from a local businessman while under police interrogation, and instead asserted that their conversations were about the alleged bribe payer wanting to make campaign donations.

Gibson, when interviewed by police two years ago, said any conversations about money he had with Jonathan Ash were sparked by the man’s desire to “see the (Progressive Liberal Party) win the next election,” and him consequently offering to “give them donations”.

A video of Gibson’s interrogation was played in court yesterday.

Gibson declined to answer whether he ever accepted any money from Mr Ash, or from Deborah Bastian, his alleged intermediary, on the businessman’s behalf. The former parliamentarian would only say “no comment” when questioned on the issue.

Nonetheless, Gibson said he “never” asked Mr Ash for any money, either directly or indirectly, much less for his own benefit and not in the discharge of his duties as a public officer.

“Listen to me,” Gibson said in the interview, “Jonathan Ash said he wanted to see the PLP win the next election. He asked in terms of donating to candidates in the south, and he asked me how much money I think he should give various candidates.

“He offered to give them donations. It ain’t had nothing to do with any personal thing. I think I may have given him the list of names.

“…Any discussions we had, (they had) nothing to do with my personal benefit.”

Gibson further denied that Mr Ash paid him $250,000 via Ms Bastian in exchange for his assistance in ensuring the man would be paid the $1m plus he was owed for Hurricane Matthew cleanup work. He also denied that Mr Ash personally gave him $50,000 cash in bribes on a particular occasion.

Gibson also denied that he demanded “shingles”—the term the Crown asserts he used as a code name for the bribery payments—from Mr Ash. He also refuted assertions that on one occasion, he used his old government-issued cellphone to text Mr Ash and demand 25 “shingles” from him, which meant $25,000.

Police interrogator ASP Debra Thompson asserted that Mr Ash subsequently met Gibson at a gun range off Gladstone Road and paid him the $25,000.

“I have never, ever, ever, ever asked Jonathan Ash either directly or indirectly for money for me personally,” Gibson stressed during the interview.

“…I have never solicited or accepted any advantage from Jonathan Ash for the discharge of my duties.”

The former labour minister denied being involved in the decision to select Mr Ash as one of the contractors for the 2016 Hurricane Matthew cleanup efforts in the first place. In fact, Gibson said he did not know Mr Ash prior to that initiative, and only got to know him as a result of that project.

Gibson said Mr Ash was initially selected as a contractor by Leyton Rahman, a chief engineer at the Ministry of Works. He said the National Recovery and Reconstruction Unit (NRRU) or the National Emergency Management Agency (NEMA), both of which he oversaw, had no input on the decision.

After a while, however, and towards the “tail end” of the project, Gibson said each member of Parliament was asked to identify at least two contractors to assist in closing out the cleanup efforts. But even then, Gibson said Mr Ash was not a factor.

“I gave names to my colleagues of individuals to clean each constituency,” Gibson explained in his record of interview. “Ash’s name wasn’t one of those, understand what I’m saying? He wasn’t selected by anybody; he was selected by the Ministry of Works. The names I gave to my colleagues, I have those names. He ain’t one of them.”

Gibson added: “He was selected by Leyton Rahman at the Ministry of Works. We had nothing to do with that selection. And at the time he was selected, I didn’t know him.”

The revelations were made during Gibson’s bribery trial before Justice Carolita Bethel. Yesterday’s proceedings were devoted entirely to canvassing the four-hour long interview ASP Thompson conducted with Gibson at the Central Detective Unit in August 2017.

Towards the middle of the interview, ASP Thompson raised the issue of just how Gibson and Mr Ash came to meet. ASP Thompson asserted that Gibson wanted to meet with Mr Ash because of the large amount of money the government owed him, and if he actually did the work.

The senior officer asserted that Gibson and Ms Bastian consequently met with Mr Ash at Gibson’s former office at the Ministry of the Public Service on Meeting Street where he questioned Mr Ash on his outstanding payments and to verify if he did the work.

Gibson, in reply, said: “Yeah, we met, we had a discussion.” However, he said he could not remember if he questioned Mr Ash based on his concerns at the time, nor the details of that meeting.

Nonetheless, ASP Thompson asserted that during the meeting, Gibson and Ms Bastian told Mr Ash that he would have to forego one of his payments in order to receive his outstanding money owed to him.

In response, Gibson said: “I don’t remember the details.”

ASP Thompson subsequently asserted that after the meeting, Mr Ash met Ms Bastian at Commonwealth Bank—the Oakes Field branch according to the evidence—and gave her $50,000 as payment on the alleged $250,000 demand.

“I can’t speak to what Ash and Debbie did,” Gibson replied.

Meanwhile, towards the beginning of the interview, Gibson, in response to questions by ASP Thompson, explained that post-Hurricane Matthew, he was assigned responsibility for “some” aspects of NEMA and the NRRU. Gibson further explained that although he served as the hurricane czar at the time, he didn’t really have a clearly defined function.

In terms of approving payments for hurricane cleanup work, Gibson explained that the Ministry of Works would negotiate the rates with whichever contractor/contractors performed cleanup work. The ministry would subsequently send the relevant information to the NRRU.

Gibson said on a few occasions, the NRRU tried to reduce the rates negotiated by the Ministry of Works, as he said he was concerned at the time that the rate sheet “was too high”. However, he said Cabinet advised them not to. As such, he said the NRRU simply forwarded the payment information to the Ministry of Finance for processing.

However, ASP Thompson suggested that at some point, Gibson changed the procedure and instructed that all payments be submitted to Ms Bastian, who worked as a consultant in the NRRU, for processing and his ultimate approval.

“No, the Ministry of Works always did that,” Gibson replied.

ASP Thompson then suggested that on or about December 8, 2016, Gibson issued a stop order that prevented any cheques from being released without his “express permission”.