Teachers Salary Win And Told - Now Back To Work 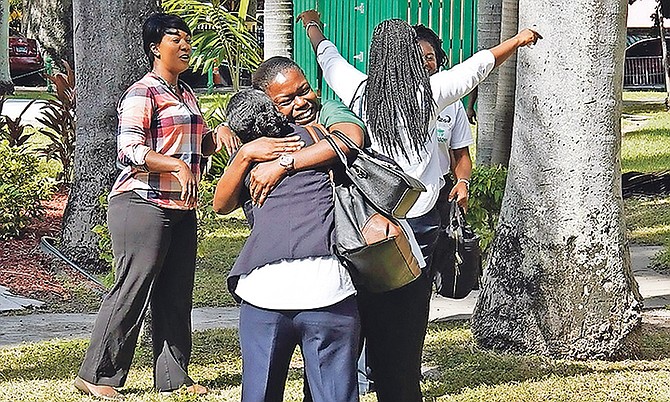 THE Bahamas Union of Teachers declared victory yesterday after Justice Bernard Turner ordered that teachers’ docked salaries be restored in full, after a battle with the government due its alleged failure to address working conditions at two public schools.

Justice Turner’s ruling is related to the government docking the wages of teachers employed at both the Carlton Francis Primary and CH Reeves Junior High Schools.

For weeks, teachers at CH Reeves have been protesting against the “unsanitary” conditions on that campus, citing the presence of mould as one of the key concerns. And concerning Carlton Francis Primary, teachers there have been calling for the removal of the school’s principal. BUT president Belinda Wilson previously claimed that for some eight weeks, teachers reported to work only to be “locked out” of the gate at Carlton Francis.

School officials also called police officers to that campus and erected barricades amid the dispute. The government cut salaries of 75 teachers at both schools and made an application to the Supreme Court to force them back to work.

Yesterday, Justice Turner ordered that the cut salaries be restored in full while the government continues to pay CH Reeves and Carlton Francis teachers’ salaries in compliance with their contracts.

He also ordered the teachers to return to work.

Outside of court yesterday, Mrs Wilson told reporters she is happy with Justice Turner’s ruling.

“It shows that no one is above the law including the Ministry of Education and the government of The Bahamas. So, we look forward to our teachers’ salary being restored, we look forward to them continuing getting their pay, we look forward to Carlton Francis teachers walking in the gate this morning, so they can go to their little darlings as the judge ordered forthwith.

“All we wanted was justice and fair play and all teachers want to do is teach the nation’s children in a safe, healthy, peaceful environment. This is a victory not only for CH Reeves and Carlton Francis teachers, but for workers in this country and I say, ‘solidarity forever,’” said Mrs Wilson.

While the judge’s order that the teachers return to work could be seen as a victory for the Ministry of Education, the union insists that teachers continued to show up to work in the midst of the dispute.

The union maintains that the government’s decision to “intimidate” teachers with police officers and barricades prevented them from entering school premises.

Permanent Secretary in the Ministry of Education Lorraine Armbrister said she was pleased with the order for teachers to report back to their respective schools.

When asked about the teachers’ health and safety concerns at CH Reeves, Ms Armbrister refuted such complaints.

She said while there are funding constraints, there is no school which is unsafe.

“There are no health hazards at CH Reeves. We have a public analysis report which verifies that and that is upheld by an overseas analysis,” she said.

The education official responded to reports of the ministry not being willing to meet with the BUT. She said the ministry has always been willing, but was concerned that the press was involved at those meetings.

For his part, the BUT’s attorney Kahlil Parker said while teachers are to report to work, they must be returning to a healthy working environment.

The Bahamas Bar Association president said: “The order is that they are allowed to resume their duties, so we don’t expect barricades, we don’t expect police, we expect teachers to be able to report and resume teaching at Carlton Francis in particular. Now the issues at CH Reeves remain outstanding and the government will have to make sure that when the teachers report to work that they are reporting to a safe environment and that the union is allowed to conduct the inspection to certify that issue.

“The fact that we have attempted that (inspection) previously is a matter of public record, other than that we have to wait for the written reasons for his lordship’s decision that may shed further light, right now all we have is his orders.”

For some eight weeks teachers have been protesting against unacceptable working conditions at both schools and both parties have not been able to sit down at the negotiating table to come to an agreement forcing the industrial action to be played out in court.

Nevertheless, the BUT president said that teachers will show up to work this morning as they have been during this entire process.

This was a lost cause for the government from the get go. . .MOE officials were and continues to make dumb statements like "they must go were we transferred them". . .which will turn into a contempt of court matter if they don't eat crow and let things lay!! The Employment Act and the union agreement leaves MOE with little wiggle room. . . POOR DECISION MAKING AT THE EXECUTIVE LEVEL IN MOE brings such rulings. . .one that set common law statutes for the future!!

The nurses at the Rand Hospital have been working in unbelievable condition from the hurricane.. perhaps they need to stop work until they get the new hospital. But they refuse, because they feel, for the most part, that there is an element of responsibility involved...