Family Give Miracle A New Home 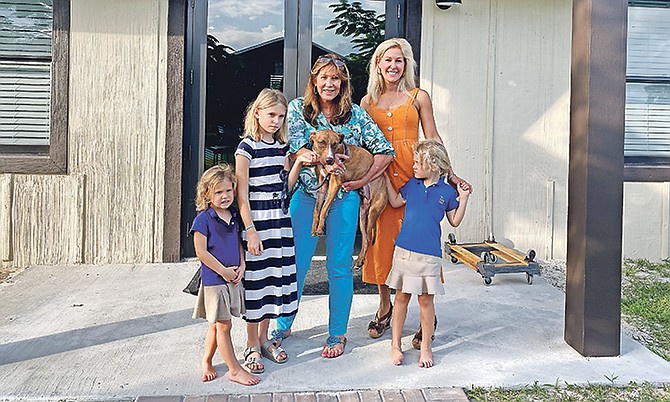 The Beaty family with their new pet.

MIRACLE, the dog who was trapped for weeks under hurricane debris in Abaco, has finally found a new home with a family in Florida.

In a press statement released on Tuesday, Big Dog Ranch Rescue announced that Miracle was officially adopted by the Beaty family of Palm Beach County, Florida — a family of five who has been visiting The Bahamas for years.

“They have a Bahamas connection, losing a long-time family home in Hurricane Dorian. They live about an hour away from the ranch allowing us to observe the many trips they took here to see Miracle,” the group said in the statement. “When we saw the way Miracle bonded with the kids they rose to the top of our list. With three wonderful young girls, ages three, five, and eight, Miracle is in for the pampering of a lifetime.”

Mr Scott said rescuers believed Miracle was trapped under the debris for about three to four weeks, surviving off rainwater alone.

“The team named him Miracle because you could not see him underneath the air conditioners and building debris. There was another dog next to Miracle that had already passed away. That’s one of the reasons he is a miracle,” he added.

And since rescuing the pup last month, Mr Scott said rescuers had been waiting to receive word from Miracle’s family in Abaco.

But, after not hearing from Miracle’s family, the group decided to put him up for adoption.

And with over ten thousand global adoption requests received for Miracle, the Beaty family was finally chosen. While the Beaty family is overjoyed with the news, BDRR said the family is hoping that those who applied will find a “miracle” of their own.

“There are so many precious dogs (from the Bahamas and beyond - even China) looking for their forever homes out at the ranch. We almost feel guilty taking him knowing he would be most certainly adopted. If everyone that called in for Miracle adopted a pup, the shelter (and others) would be cleared, and that would be another wonderful miracle,” the family said in a statement released by BDRR.

The story of Miracle is indeed a miraculous one and according to Mr Scott, the pup has already given so much hope to people throughout the country who are trying to cope with life after Dorian.

“So many have sent social media messages and phone calls expressing that Miracle has given them hope for the rebuilding and future of The Bahamas and inspired them in difficult times,” Mr Scott told The Tribune.

“We have heard from countries all over the world and this little (dog) is serving as an inspiration to support Bahamas relief and the spirit of The Bahamas,” he said.

10k plus friends of The Bahamas through Miracle.