Insight: Rebuilding Homes Is Easy, Putting Lives Back Together Is The Biggest Challenge 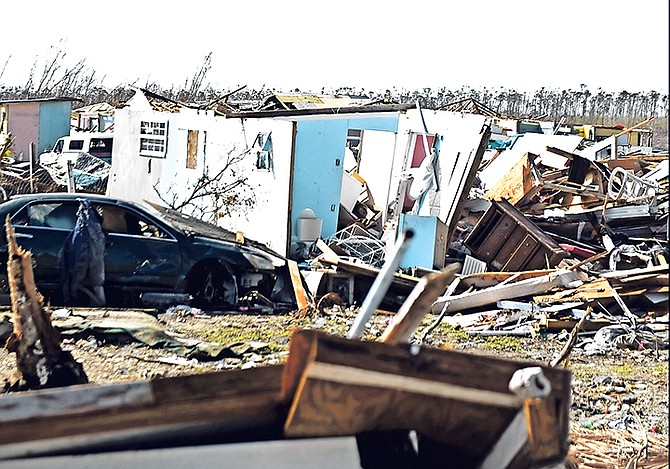 Damage on Abaco after Hurricane Dorian, pictured early in October.

Hurricane Dorian has been nothing short of apocalyptic for many survivors who escaped the Category 5 hurricane’s fury over Abaco and Grand Bahama. While it is possible rebuilding the infrastructure of these islands could run into the billions, a greater cost is the rebuilding the lives of the survivors.

Renowned Bahamian psychiatrist Dr David Allen says that from his decades of experience, traumatic events such as Dorian shake the fabric of a community by causing increase in murders, domestic violence, other violent crimes and car accidents.

Due to the grave impact Dorian had on The Bahamas, Dr Allen, pictured right, said in some cases, people’s animal instincts begin take over and they start to live on automatic pilot. He said: “You would have noticed after Hurricane Dorian our murder rate kept tipping up to sometimes four or five per week and that was very hard. When Dorian hit it was like everything was out of whack and this is a common thing to happen to a community as a whole when there is a traumatic event of this nature.”

The murder statistics show that since Dorian struck on September 1, the murder rate increased from September 4 when there was one killing, thereafter on September 6 four people died, September 8 and 15 one person each day, September 16 recorded three and September 17 documented two murders.

Nevertheless, Dr Allen remains resolute that there is still much hope and that the Bahamian community must work harder at not only rebuilding infrastructure but be just as aggressive in rebuilding people through dealing with their mental health and wellness.

In The Bahamas quality private mental health care is available to a relative few, but Dr Allen and his team of therapists over the years have been working to provide more people access to sources of mental health wellness groups.

One of the participants in The Family group therapy, Ruby Mitchell is a teacher at Agape Christian School in Abaco. Ms Mitchell described her experience of Dorian in Abaco as horrifying. In the middle of the storm she had to escape her home with her three children in order to survive. With the three children crying, one on her back and facing her worst fears, she was determined to get out of her home and get to a neighbour’s house.

She said: “Just to sit down and think about everything I lost it’s depressing. Everything I had is gone I have nothing left. I recently bought a car earlier this year and that is destroyed and I didn’t even have it a year yet. But I really try not to think about it.”

Ms Mitchell’s youngest daughter continues to talk about Dorian every day. In recent rainy weather she was afraid and asked if Dorian was coming back. ms Mitchell - who lost her husband to a car accident almost a year ago - said that it has been difficult facing the storm and its aftermath without him.

Attending The Family group therapy has allowed her to express herself freely. She said: “I have been praying a lot and asking God to keep me and my children and to cover our minds. It’s (The Family) been helping me and I get to talk about everything. So, it helps, it helps me to cope with everything. And I really have to be strong for my children, they look up to me, they depend on me for everything, especially after their dad passed away, so I have to be strong for them.

Dorian was Troy Seymour’s fourth hurricane deployment, and was by far the most life altering experience he has had in working a hurricane. He is a Marine Seaman with The Royal Bahamas Defence Force. He also participates in The Family therapy group. Mr Seymour said: “It was a mixture of dealing with a lot of people who were just broken-hearted. From single mothers, single fathers and married couples not knowing what tomorrow may be like for them, not knowing where they were going to rest their head for the night. I’ve seen fathers break down and cry because they did not know what would be the next step in preserving their family.”

Seymour said while he was happy to do his part while working, Dorian was a traumatic experience for him, but also one that taught him countless life lessons and to appreciate the small things that are daily taken for granted.

One of the duties Seymour carried out was delivering food. He explained that something as simple as Bahamians throwing out leftovers because they do not want to eat the same thing for dinner from the day before, is someone else’s prized possession.

He said: “I was touched by a seven-year old girl who made a song for me about ham sandwiches. She did that because for several days in a row that’s what we had to feed people, but she and her family was so appreciative that they had something to eat. In that environment where everything has been taken away from you and you have stripped to the bare bones and some of those bones have even been taken away, something as simple as a ham sandwich becomes gold to you. “

In the midst of working, Seymour had not heard from his mother is 72 hours but could not search for her while he was on duty. Eventually he was able to find her. He said: “At that point I had to ask God to give me peace to accept if my mother was dead or alive. Because I did not know what was going on with her, it’s easy to worry. When I did find her, she held me so tight and just cried.”

For people who were survivors, Seymour as a defence force officer felt that in addition to his other duties, it was also his job to help people to encourage people to move on, let them know that with each step it will get better.

He said: “It was a very humbling, trying time and I was filled with emotions that I didn’t know I could express. When I came back to Nassau after 40 days in Abaco I went to the stove to make something to eat and I just stood there for five minutes staring, I couldn’t move I didn’t know what to do. I did not realise that in working in Abaco I took away certain feelings and emotions. Eventually I was able to cook. My coping has been going to therapy twice per week and talking about my experience.”

As a man, Seymour realises that men are not normally open to therapy or sharing tough emotional experiences for fear of society’s judgement.

He explained: “I believe that men need to find a healthy way to express their emotions instead of suppressing them. Especially from a man’s perspective because society says to us, ‘Be a man, stand up and be strong, don’t cry, you can handle it, be tough’. That is a very dangerous approach, men too need to speak to somebody, men too need to release these emotions.”

In continuing to meet the mental wellness needs of those hurting, Dr Allen and his team of professionals have had to train lay persons to help with trauma to meet the increase in demand. These are people who he says, because of their own personal trauma have been able to be effective in helping others.

To date, Dr Allen and his team of psychiatrists and trained therapists have been making their rounds in Abaco and Grand Bahama. Some years ago, ‘The Family’ group therapy started in places like places like Green Turtle Cay and Man-O-War Cay, but Dr Allen is anticipating there will be great need for group therapy in Marsh Harbour and various areas in Abaco and Grand Bahama even after communities are rebuilt.

Dr. Allen is totally focused on making hay while the sun shines........he's certainly seems determined to get a lot of people addicted to his happy pills. LMAO

This article is all just drivel. All the talk in the world will do you no good !

When people get back on the horse, they’ll be ok, until then, no shrink and definitely no happy pills will help.

These head shrinks are just another Bain in this world, sucking off those who are down. !

Chucky, I respect your right to express your thoughts. I'm sure you have your reasons for the position. Nonetheless, it's not fair or accurate to undermine the value of mental health counselors. While I am not focusing on any specific person, it is important to acknowledge the value in speaking to others about a deep loss or emotional crisis. Especially if that person is trustworthy, qualified, and is honestly committed to helping. Holding on to a lot of hurt feelings or resentment can destroy a person from within. Many of can attest to the examples we've seen. Thanks for hearing me out.

Chucky, I respect your right to express your thoughts. I'm sure you have your reasons for the position. Nonetheless, it's not fair or accurate to undermine the value of mental health counselors. While I am not focusing on any specific person, it is important to acknowledge the value in speaking to others about a deep loss or emotional crisis. Especially if that person is trustworthy, qualified, and is honestly committed to helping. Holding on to a lot of hurt feelings or resentment can destroy a person from within. Many of us can attest to the examples we've seen. Thanks for hearing me out.