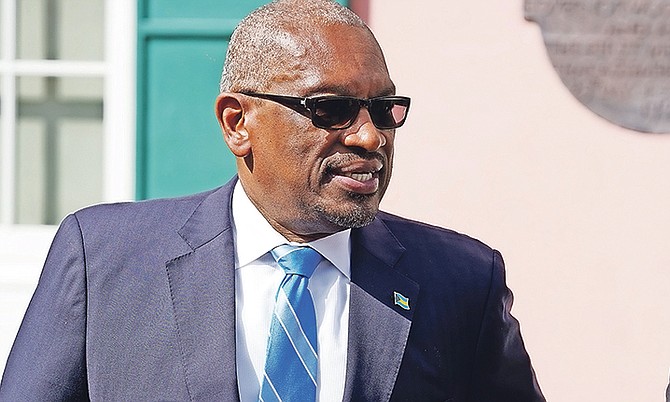 Dr Minnis highlighted the state of the country’s already stretched social resources faced by the government and its impact on the country. He also referenced The Bahamas government’s strategy to prevent the re-establishment of unsafe shanty towns and the importance of protecting the country’s borders.

According to a press release from the Office of the Prime Minister, Dr Minnis noted that immediately following the passage of Hurricane Dorian all residents displaced by the storm, “including undocumented migrants, were evacuated and provided with shelter, food and medical treatment at the expense of the Bahamian government. Education assistance was also provided.”

The OPM statement noted that repatriations were suspended for a period of time for non-documented residents affected by Hurricane Dorian in the immediate aftermath of the storm. These repatriations have since resumed.

Dr Minnis emphasised during his meeting that all undocumented migrants would be treated humanely and reiterated that The Bahamas is a country of laws and governed by the rule of law. Therefore, the government is obliged to follow the law as outlined in the Bahamas Immigration Act.

“He reaffirmed that all undocumented migrants will be repatriated and the construction of shanty towns would not be tolerated,” the OPM statement continued. “Prime Minister Minnis noted that first-time applicants of work permits must apply while outside of The Bahamas and employers of work permit holders must ensure that safe and suitable housing is provided for employees.”

During the meeting, held last Thursday, Commissioner Stylianides and Dr Minnis also discussed how the EU could provide increased humanitarian and development assistance.

The EU was among the multilateral agencies to provide relief and assistance immediately following the storm.

The meeting at the European Union’s headquarters marked the end of a series of meetings between the prime minister, Cabinet ministers and officials from the EU and African Caribbean and Pacific (ACP) Group of States.

Dr Minnis, who led a delegation to Brussels on November 11-15 that included the opening of a new embassy and European Union mission, addressed a meeting of the ACP Commission of Ambassadors on November 14.

Minister of Foreign Affairs Darren Henfield and Bahamas Ambassador to Belgium Maria O’Brien met with candidates vying for the post of ACP secretary-general.

Focus on the colony's comrade prime minister's most operative three words outlining Imperialists red government’s strategy to prevent the re-establishment of unsafe shanty towns, yes, no ... You don't make stuff like this three word phrase excuse for no eventual ShantEXIT up, you just can't!**

Just more 'talk' and no 'do' by Minnis. Since Dorian to-date we have deported less than 250 illegal aliens compared to many more than that number who have illegally entered our country during that same period. We are swimming backwards while Minnis blows his hot air!