Face To Face: Rich With The Stories Of Life Remembered - And Elaine’S Only 97 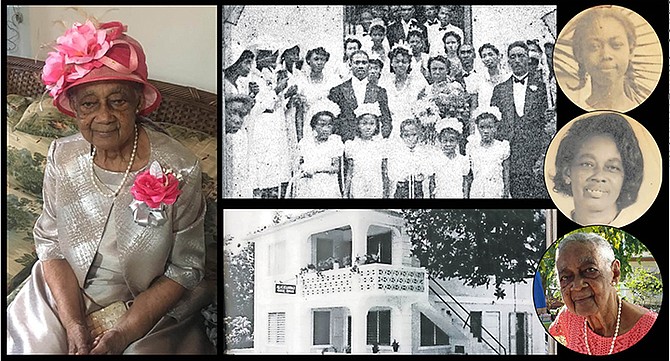 Above: Elaine married Lewis Major in May, 1943 at Salem Baptist Church, Parliament Street; left: the Hay Street homestead; far left and right: Elaine through the years.

I recently came face to face with a remarkable woman. Not because she‘s super rich. Not because she’s super talented. Not because she’s a genius. The usual reasons that people make indelible marks on others didn’t apply here. The reason Elaine Aliceanna Virginia Moxey-Major made such an impact on me is because at the age of 97, she has all her wits about her. She is in control of all her faculties and she is even funny. I sat with her for three hours one afternoon, and as I conversed with her daughter, Cynthia Hall and my friend Antonia Adderley, she never missed a beat. She chimed in right on time and dropped snippets of wisdom that shut us all up when she was ready.

Notice that I put her entire name in my introduction – because that is exactly how she said it to me! A proud Ragged Island woman, Elaine introduced herself with a sense of pride and conversed actively with me through those hours. Anyone who meets her would marvel at her and would wish to be blessed the way she is. She played with my baby, she offered us drinks and she could pick up a conversation right where we left off whenever the exchange was interrupted by bursts of laughter.

Elaine Moxey-Major is believed to currently be the oldest living Ragged Island native. Although she cannot remember all of the events of her life, she remembers a whole lot. There were times when she even schooled us when referencing people and places. Through nearly a century of life experience, one of the greatest lessons I think she learned is what she displayed that day – living life in the moment, laughing at the little things and appreciating people for who they are.

Clarence and Mildred Moxey welcomed their first born Elaine on May 18, 1922 in Duncan Town, Ragged Island. As a young child, she had the opportunity to travel from Ragged Island a few times to visit Nassau on a sailboat. Back then, a journey from the southern isle, Ragged Island to New Providence, could take up to two weeks, possibly including stops at other islands along the way.

When Elaine was seven years old, The Great Hurricane of 1929 happened. It struck The Bahamas as a Category 4 packing winds of 140 miles per hour. It devastated the northwest Bahamas and stayed over Nassau and Andros for three consecutive days, moving at 2 miles per hour. It claimed 142 lives, most of them sponge fishermen caught at sea. It changed the face of the Bahamian economy. It was during this same year that little Elaine moved to Nassau with her mother.

Elaine’s siblings were Levonne, Gloria, Joyce, Oraline and Locksley. Mildred was pregnant in that year and she moved to Nassau with two of the children, while Elaine remained in Ragged Island with her grandparents, Granville and Mazorian Lockhart. Later that year, Elaine came to join her mother and siblings and live with them in a house on West Street, Nassau. Back then, people knew how to live in much smaller quarters and make do with much less than they do today. For Elaine’s family, they rented a room in Mr Colebrooke’s house. His home was separated into rooms. Three families lived there. The families got along well and Elaine can remember the Lockharts living there. She remembers Louise, whose husband operated a horse and carriage, and their son, Walter.

“We were good friends and they were good families,” she said. “Things were very rough in those days. But everyone had good neighbours. You know what I needed and if you have it you would give it.”

Thus began Elaine’s new life far from the simplicities of Ragged Island life, but with the good moral values that defined that old Bahamian lifestyle. She had come to the city and would pursue her education there. She attended Cassie Kinnear’s school, which was housed in the Good Samaritan Lodge Hall in Nassau Court, opposite the British Colonial Hotel. She also recalls attending a public school on Hospital Lane, and Elaine said the structure was so high you could actually stand underneath it.

Elaine’s mother would ‘take sick’ from time to time; therefore, Elaine was not always able to attend school. There were times when she would have to forfeit school altogether to take care of her siblings and send them to school, while she would remain home to care of her mother.

I asked about her father’s level of support. Although he worked hard, she recalls: “Daddy would get up in the morning and write on a board what we were having for breakfast, lunch and so on. He would cook the food. He would knead and bake bread for us… and he was a very good cook. He was known as ‘the turtle man’ because he would sell turtle meat. But he would also sell fish, conch and other seafood at the place where the straw market is now.” Clarence was actually the supplier of seafood for the Bahamas General Hospital.

She also shared that her father used to work on a boat: “The name of the boat was ‘Sir Charles’ Oar’.”

“My mother’s brother, Calvin Lockhart (bought the boat in the US) and he took it down (through the States) as far as Miami. Then he and my daddy brought it here. My daddy worked with him on the boat. It would stop to different Family Islands bringing freight and passengers.”

Eventually, her father completed the building of their home on Hay Street East. The yard was known for the ‘big mammie tree’. The family moved from West Street to the homestead in 1931 - the same year her baby brother Locksley was born.

The Hay Street homestead would be one filled with fond memories for the Moxeys, not only for their immediate family, but for future generations.

Elaine shared a story that had us laughing to tears as she recalled it in her own delightful way. It gave me a good insight into the level of order and respect of the day.

She was 21, and her husband to be, Lewis R Major was 22. He had already written a letter of proposal. He would attend church with her and her siblings, and would walk her home. On one occasion, instead of heading home straight from church, they made a stop at Long Wharf. Diving off the wharf to collect coins that tourists would drop was very common back in the day. One day, they decided they would sit for a while and watch the brilliant diving antics put on for the tourists. That turned out to be a big mistake. When they approached home, her father was standing at the door. Lewis was too scared to even step foot inside the gate, because he knew they were late coming from church. If you hear Elaine tell this story, you could just picture the events that unfolded. I asked her to repeat it just to burst out laughing again as she described the stern look on her father’s face and the look of fright and terror on her beloved’s.

They weren’t married yet, and her father made sure that she would be given away the right way. The touching marriage proposal letter was made by Lewis – not to Elaine – but to her parents. I remember when I first read my grandfather Allan “Super” or “Mr FNM” Ingraham’s letter of proposal to my grandmother, Sylvia Thurston-Ingraham. When I saw Lewis’ it reminded me of the letter and helped me to understand just how special this way of communicating was during that time. The touching letter was to Elaine’s parents. It spelt out his love and intentions and he said that even though he is “a poor boy just starting out in life”, he would do his endeavour best to “make her as happy as she would ever like to be”.

Eventually, Elaine and Lewis got married at Salem Baptist Church. They went on to have seven children - Florinda, Judith, Cynthia, Ronald, Mildred, Sandra and Patricia. Judith predeceased both of them.

Her father ended up being a great support of her marriage to Lewis. They rented the second house that was in the yard on Hay Street. Her father had purchased it from the neighbour. She recalls that all of the money her husband had paid to her father in rent for that house over the years, her dad put aside to take them from being tenants of the house, to owners. Lewis had a career at the famous Hobby Horse race track as a jockey. He also worked as a cook for Nancy Oakes, the daughter of Sir Harry Oakes at the race track’s country club. Elaine was a home maker, but she also did a bit of sewing for others. She learned the skill from Mrs Anna Bethell, whose husband Cecil was a head teacher at The Government High School.

At the age of 38, Elaine became a widow when Lewis suddenly died of a stroke. She was left with six children to care for. Her youngest child was only ten months old at the time. She had to become the bread winner for her family. She succeeded and was able to take care of not only her children, but her grandchildren. After selling lunch at A.F. Adderley School, she would be home in time to welcome her grandchildren from school with a meal and all the necessary instruction they needed to make life easier on their parents before they were collected. She often had enough cooked so that her children didn’t have to cook after a long day at work.

When I asked her about the highlight of her 97 years, she replied: “The highlight of my life was taking care of my children. They were not disobedient. I didn’t have any major problems from them. They all made me proud.”

Nice testimony of life as it were back then...