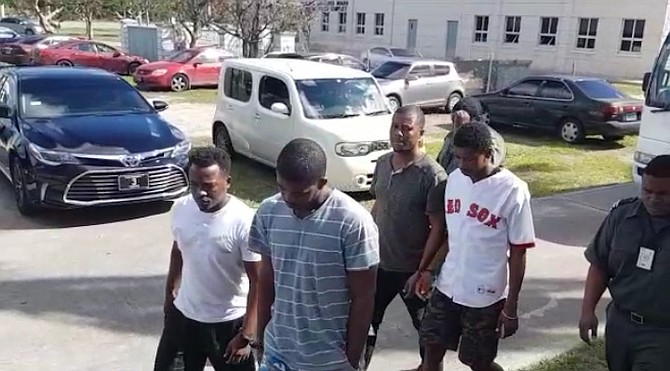 The men outside Freeport Magistrate’s Court.

FOUR Haitian men were recently charged in the Freeport Magistrate’s Court for breach of the Immigration Act.

They were charged with overstaying contrary to Section 28(1) & (3) of the Immigration Act.

It is alleged that on November 10, the men were all found in Freeport, Grand Bahama after the expiration of their visitor’s status. They all pleaded guilty and were convicted and ordered to pay a fine of $3,000 each or in default serve nine months imprisonment.

The men were also charged with misleading an immigration officer, contrary to Section 10(e) of the Immigration Act.

According to the particulars, the men knowingly misled immigration officers by providing false names during interrogation.

They pleaded guilty to the charge and were ordered to pay a fine of $3,000 each or in default serve nine months imprisonment.

Magistrate Johnson also ordered all defendants deported to Haiti upon payment of the fines or completion of their custodial sentences.