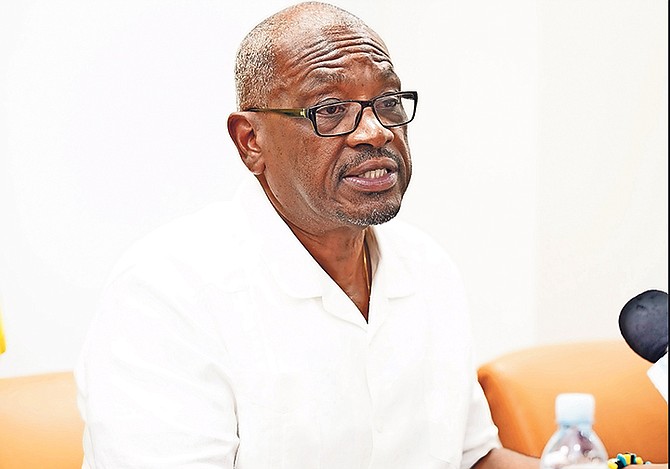 Former Commissioner of Police Paul Farquharson is the head of the government’s Rehabilitation of Offenders Committee. He told The Tribune earlier this month that he wants young and first-time offenders, especially those convicted of drug possession crimes, to get their criminal records expunged.

Under the Rehabilitation of Offenders Act (Amendment) 2015, people who have committed murder, manslaughter, treason, armed robbery, rape or possessed dangerous drugs with the intent to supply cannot have their records expunged. But after five years most others are eligible if they are first-time offenders or were younger than 21 at the time of their first conviction. People have to apply to get their records expunged and Mr Farquharson hopes that after their application is submitted, it will take the committee no longer than three to six months to reply.

Last week, Dr Minnis became the first sitting prime minister to publicly support some form of marijuana decriminalization, saying that in addition to decriminalizing possession of small amounts of the substance, he wants it legalized for medicinal and/or scientific purposes.

He said in a statement yesterday: “Our laws regarding the possession of small amounts of marijuana have unfortunately led to the arrest, prosecution, conviction and punishment of many Bahamians.

“Some of these people have been burdened with criminal records, making travel and finding work more difficult. Reforming our marijuana laws and changing how we treat people with small possession convictions is a matter of social justice. I support expunging the records of Bahamians convicted of possession of small amounts of marijuana. They deserve to move on with their lives free and clear of a criminal conviction. I eagerly await the release of the report by the Bahamas National Commission on Marijuana.

“My government will use the report’s findings to help reform our marijuana laws. Part of this reform should be expunging the records of Bahamians convicted of possession of small amounts of marijuana. Being from the Over-the-Hill community, I have seen firsthand how our current laws especially harm young people from modest backgrounds. The commission’s findings will be widely circulated and we welcome the input of Bahamians as we make those long-needed changes to various laws. A Rehabilitation of Offenders Committee has been formed and is reviewing a number of matters for recommendation, including the possible expunging of some criminal records for possession of small amounts of marijuana. We will also take into consideration the recommendation of this committee.”

To expunge the records of first time users or persons caught with a small amount of cannabis after 5 years is not going far enough and makes no sense, the ball is only being kicked down the road from 7 to 5 years, this action still means that a person has to wait 5 years, DECRIMINALIZTION of small amounts up to an ounce, is the only way to go to make any sense, cannabis should be a controlled substance just like alcohol or Tabacco.

Doofus Minnis is of the view that anything illegal in the Bahamas can now be made legal. He came to this realization with his wrongful cozying up to the racketeering thug Sebas Bastian for 'financial support'. In Minnis's mind, if his government can accept the 'legalization' of the corrupt money laundering and other criminal activities of the web shops run by Sebas Bastian and Craig Flowers, then it can accept just about anything else illegal being made legal. After all, what could possibly be wrong with a society comprised of many drunkards, many gambling addicts and soon to be many pot heads?

By the way, did anyone ever find out how the Pindling family managed to get Leslie Pindling's record expunged after he was caught with a considerable quanity of marijuana many years ago? Also, did anyone ever find out how he managed to get his very lucrative contracts with the Red Chinese developers/owners of The Pointe water front project downtown?

I say it is time for a CBD industry in the Bahamas to help the economy.

Would be the death knell for auto insurance and new car loans - nobody would be able to afford the insurance premiums.

doc will do and say anything if he thinks it will win him votes. They say the best revenge is living well. not so for mealy mouth doc .his ways and his looks are the same.

When I read the headlines, "Time to Wipe the Slate Clean" I thought Minnis was leaving the Prime Minister's office.

Hands down you win today's "glass half full" award for that very wishful thought!

Just expunge all the records one time. And offer an apology to those convicted. Keep it simple, why set up more useless bureaucracy costing thousands of dollars needed elsewhere. And why do those convicted have to go through the humiliating process of applying&gt; This is just dumb.