Nothing To Say: Gibson Stays Silent As Corruption Trial Draws To Its Close 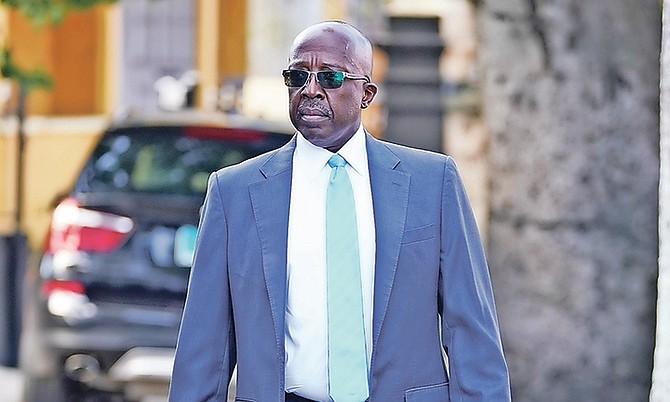 LAWYERS for Shane Gibson wrapped up their case in the former labour minister’s bribery trial yesterday after calling one witness who praised Gibson and expressed disbelief that he could have committed the crimes of which he is accused.

The prosecution and the defence will present closing arguments today.

A verdict in the closely-watched case will then come down after Supreme Court Justice Carolita Bethel gives directions to the jury.

Yesterday’s hearing began with proceedings taking place in the absence of a jury, following which Leanza Elizabeth Gardiner-Keju, a Seabreeze Estates resident, took the stand.

She testified that she met Gibson 34 years ago when he was recruited to join the youth choir of Church of God of Prophecy on East Street where she is currently a minister and national youth choir coordinator.

She described Gibson as personable and humane, adding that he was “above reproach,” had “high moral standards,” and was a “man of integrity”.

She found him bold and ethical, she said, highlighting his move to reduce rent space to $25 per square feet.

“Reducing the rate was right, we were paying for properties several times,” she said, adding that Gibson “wanted things transformed and believed in the rights of the disadvantaged”.

Asked for her reaction to the bribery allegations against Gibson, she said: “That’s not the man I know.”

Under questioning from crown prosecutor James Guthrie, QC, Mrs Gardiner-Keju confirmed she left Gibson’s ministry in 2014, before Hurricane Matthew and the events material to the charges the former Golden Gates MP faces.

She told him that although she knows of the allegations against Gibson, she doesn’t know the details of them.

For his part, Gibson opted to remain silent and not testify in the case.

Gibson is charged with 15 counts of bribery. It is alleged that between January 16 and 19, 2017, while being concerned with Deborah Bastian, he solicited more than $200,000 from Jonathan Ash as an inducement to or a reward for him giving assistance or using his influence in approving outstanding payments owed to Mr Ash by the government.

Between February 10 and March 27, 2017, Gibson solicited and accepted a total of $80,000 each from Ash, but this time he was not concerned with Bastian, the prosecution maintains. The prosecution claims Mr Ash initially made the payments to Gibson through Bastian for the first set of payments totaling $200,000, but made them directly to Gibson for the remaining $80,000.

Gibson has denied the charges.