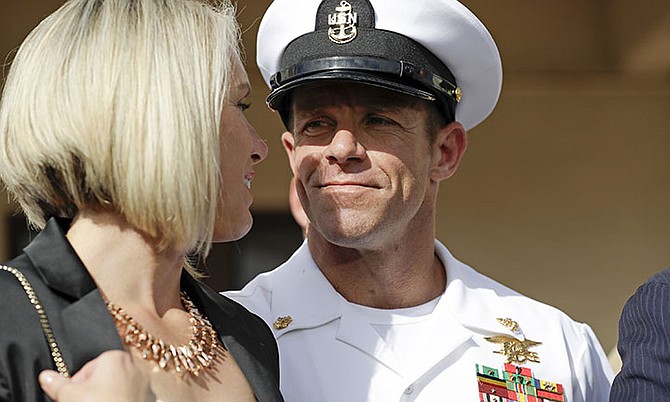 Thanksgiving morning in the United States has for the past 30 years been preceded by the charming ritual of the American President “pardoning” a couple of fat, healthy turkeys from becoming someone’s holiday feast. The president, with his wife at his side, usually pats one of the turkeys, cracks a joke or two, and the photo op is over.

US President Donald Trump has stuck to this tradition for the past three years, and dutifully pardoned turkeys named Bread and Butter the other day. With Melania smiling at his side, he cracked an Adam Schiff joke about Congressional subpoenas and the moment passed lightly enough.

But the two turkeys weren’t the only beneficiaries of presidential leniency on the occasion of this iconic American holiday.

Trump also pardoned Eddie Gallagher a couple of days ago.

Until fairly recently, hardly anyone had even heard of Eddie Gallagher. There has been endless speculation in the mainstream press and around office coffee pots about Trump and pardons, but it has focused on the president’s loyal high-level aides, associates and confidantes who are now indicted, convicted or imprisoned felons.

But Eddie Gallagher? For nearly a week, the national press and punditry have been reminding us about him. His case might be potentially far more significant than anything Trump eventually chooses to do about his crooked cronies.

Gallagher has been a Navy SEAL for the past 20 years. He is fit, looks dashing in his white uniform and does his part to make up a terrific looking couple with his glamorous, steadfast blonde wife Andrea at his side.

Americans do and should expect their military servicemen and women to be exemplary. They should represent the best of the nation, and have been consistently celebrated as such, particularly since President Richard Nixon and Congress did away with the military draft in June 1973.

Several elite units in the American military are justifiably celebrated, either for heroic past achievements, unusually rigorous standards or both. The Navy SEALS are such a unit.

The SEALs (the acronym signifies sea, air and land operations) are the Navy’s elite special operations force, moving quietly and with lethal effect to bring down some of the nation’s most notorious foes. Osama bin Laden is one recent example.

The unit’s fame has doubtless been enhanced by the CBS drama SEAL Team, now in its third prime time TV season.

The SEALs were formed by order of President John F Kennedy in 1962, and began building their reputation during the Vietnam War. A veteran of that war recalled recently that when a group of SEALs walked into a mess hall in Vietnam, the room would fall silent for a moment.

“There was an air of menace about those guys,” the vet said. Even in a wartime setting, with other soldiers all around, they stood out. There’s a quiet, assured confidence about them. Their whole aura just screams ‘don’t mess with this dude’.”

It’s not altogether surprising that within such a macho culture with its singular focus on often lethal results, rogue behaviour sometimes occurs. When that rogue behaviour violates the Uniform Code of Military Justice, it is the military’s job to mete out appropriate punishment.

He pulled eight overseas deployments in his 20-year navy career, including Iraq and Afghanistan. He had training as a medic, sniper and explosives expert. He earned two bronze stars, among other awards for valour. Gallagher also carried with him the scent of controversy.

He was investigated for shooting an Afghan civilian in 2010 and reportedly tried to run over a navy police officer after a traffic stop a few years later. There were numerous other reported incidents, some of which allegedly violated SEAL rules and codes of conduct. The navy eventually seems to have decided that it must put him on trial.

In 2018, Gallagher was court martialed after accusations that he stabbed to death an ISIS prisoner and posed for photos with the corpse afterward. By this past summer, Gallagher’s case had attracted the interest of some GOP congressmen, and eventually the US president decided to get involved.

In July, Gallagher was acquitted of all but the least of the ISIS prisoner-related charges, but his sentence included demotion from Chief Petty Officer to Petty Officer First Class and a concomitant reduction in his expected lifetime navy pension of around $200,000.

Eddie Gallagher has appeared to plead his case on Fox TV, and, egged on by Fox and House republicans, Trump decided to intercede and countermand the demotion. Trump also restored Gallagher’s Trident pin, a prized emblem commemorating his SEAL service.

Now, as the dust begins to settle, Trump has boasted that he will ask the Gallaghers to join him at campaign appearances. Imagine the impact of this striking couple with the president, on the stage in front of a huge

American flag, railing at all those bureaucrats and liberals back in Washington, DC, trying to pull down an American war hero.

It’s cynical, manipulative and misrepresentative of the reality described by the US military’s own investigators. But it also might be political genius. 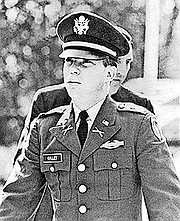 When Nixon stepped in for My Lai’s Calley

Trump’s intervention in the Gallagher case and his imprisonment conditions is reportedly the first such action by a sitting US president since Nixon ordered the release from a military brig of Army Lieutenant William Calley, right, in 1971.

Calley had been secretly charged by the US Army with overseeing the 1968 massacre of 109 Vietnamese civilians in the hamlet of My Lai. Once Calley had been moved from the military brig, he was easy to find, according to the autobiography of Pulitzer Prize winning American reporter Seymour Hersh. Calley told Hersh about the secret army charges.

Hersh’s revelations of the war crimes committed by Calley’s platoon subsequently energised the massive American societal resistance to the Vietnam War more than any other single incident. That resistance weakened the Nixon presidency. Looking back on his decision to intervene in the Calley case from political exile after he was forced from office in 1974, Nixon might have regretted that decision.

How will Trump come to regard his intervention in Gallagher’s case? 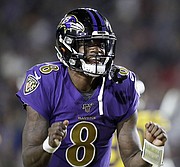 Anybody see Lamar Jackson coming? Not too many . . .

Did you see Lamar Jackson coming? Not too many NFL experts did. Taken with the very last pick in the first round of the 2018 NFL draft by the Baltimore Ravens, quarterback Jackson had won the 2017 Heisman trophy at Louisville, but saw his performance slip the following year. There were murmurs that his accuracy was not up to NFL standards, and that he wouldn’t prosper leading a pro offence from under centre. There was concern about injury, since Jackson is a gifted runner and figures to take many hard hits from defences.

So there were decidedly mixed reviews when outgoing Ravens general manager and Hall of Famer Ozzie Newsome traded back into the first round last year to select Jackson as the eventual successor to longtime and Super Bowl winning QB Joe Flacco.

It’s now a season and a half later. Flacco is long gone, traded for a mid-round pick to Denver, where he has been often hurt and unimpressive when healthy.

Jackson is merely the front-runner for NFL MVP this year. Among the Ravens’ nine wins so far are: 30-16 over the 9-2 Seahawks and Russell Wilson in Seattle; 37-20 over Tom Brady and the 10-1 Patriots; 41-7 over Deshaun Watson and the 7-4 Texans, and, on Monday, 45-6 at the Rams in Los Angeles. The Rams were thought to have the best defence in the league before the season.

There are still plenty of sceptics, and maybe Jackson and his young receivers won’t go too far in the playoffs. But they host the 10-1 San Francisco 49ers this Sunday, and if Jackson leads them to victory again, there won’t be room for any more scepticism.