DIANE PHILLIPS: Leave our debt for another day - we need to spend to fight off climate change 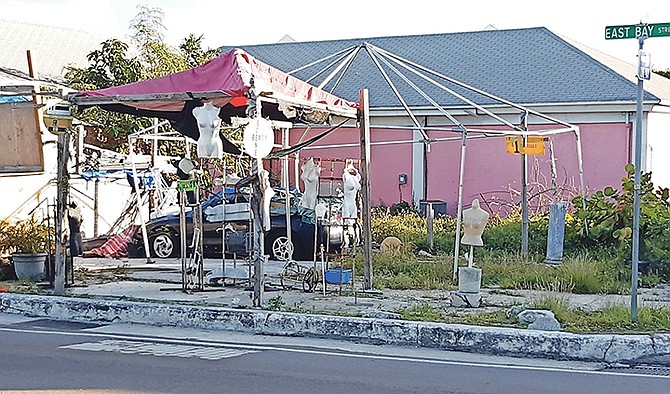 Like most folks, I hate to owe anything to anybody. I feel a sense of supreme satisfaction paying off a credit card. I even enjoy paying bills (except BPL which infuriates me), but as I said, knowing that I’m momentarily debt-free and what I earn is what I get to keep - at least until the next bill comes along - provides a good-all-over feeling.

So, like many, I transfer and upload that admittedly obnoxious moral satisfaction from a personal level to a national level. If I can balance my budget, why can’t the people who run the government? They borrowed. Now, isn’t it the moral thing to do, to pay back what you promised you would? Maybe. Then again, maybe not.

Ever since Hurricane Dorian slammed into Abaco, Grand Bahama and the finances of The Bahamas, the Deputy Prime Minister and Minister of Finance Peter Turnquest, Financial Secretary Marlon Johnson and others have been labouring overtime to try to get us to understand that the balanced budget trajectory they were on has to take a back seat to putting lives and a country back together. That seems obvious. Apology not needed.

What is needed is transparent accounting, an explanation of how the devastation impacted and will continue to impact revenue and a clear and transparent picture of what the benefits of expenditure - including infrastructure, stepped up law enforcement and incentives to get business back up and running - will be and most importantly, what the costs of mitigation against future Dorians are.

The second reason I’m entering unfamiliar territory of national budgets - about which I know less than just about anyone - is because I heard a very prominent American recently declare the US was facing a “ticking debt bomb”. It sounded so dramatic I thought he must be correct, so I went Googling to learn about the true cost of debt. People spend their entire lives studying heavy subjects like this. I gave it an hour.

That American, a former member of a Republican Cabinet and still a very relevant man, was probably on to something in the US where national debt stands at $22.71 trillion and the national gross domestic product is roughly $20 trillion. It’s not as though the debt has to be repaid and certainly not immediately because even though it sounds bad that it’s $67,000 for every man, woman and child living in the United States, about three quarters of that debt will be owed to the American people over an extended period of time in Medicare payments, notes and bonds.

The rich, for the time being, will continue to make money off the debt because as the US government continues to borrow, those who can invest in Treasury notes and bonds will earn interest. So, yes, it’s a formidable issue that will take its toll and probably cause taxes to increase because no politician likes to cut spending, though of course pundits say the best way to emerge from a debt crisis is the same way you emerge from a slow economy – governments jumpstart it with capital gains and infrastructure projects.

And that brings us right back to The Bahamas. National debt is not our greatest worry for those who look beyond the next election. Our greatest threat is and will continue to be climate change and the fastest way to tackle both is to spend the money necessary to prepare and to mitigate.

Zones that will be safe for aircraft 20 or 50 years from now, harbours that need to be beefed up, seawalls and bridges that need to be raised and solar, wind and hydro-power projects for New Providence as well as the solar project announced for Family Islands – all those projects will create untold jobs and net vast rewards far greater than the pronouncement of a balanced budget.

From an accounting view, The Bahamas is in far better condition than the US. Sure, our debt is high for a small nation, $8.2bn, but that is still under 65 percent of GDP.

This may sound like heresy. But the forward-looking leaders who take climate change as seriously as it needs to be taken and take courageous steps now to mitigate the impact will be the leaders whose legacy will matter.

It is hard to not to notice that a certain business in a highly trafficked area of East Bay Street has been operating al fresco in recent years.

The particular business, which happens to be where thousands of visitors pass on their way to the resorts and homes on Paradise Island, might best be described as a storefront minus the store.

Here’s what it does have instead – the latest in beachwear and cover-ups, bare tent frames, dangling bare bone mannequins and in the background, what appears to be an abandoned vehicle with a tarp of sorts. Business does seem to be a bit slow these days.

Your premise is correct. Focus on immediate quality of life issues. However, the US prints its own money and can make or break most global economies with their entrenched interests, be it the International Monetary Fund, World Bank, International Bank of Settlements, and numerous other organizations focused solely on controlling the world. Yes, they may be losing their grip, however, The Bahamas as no such advantages. Actually, we have zero. Our central bank is merely a figurehead here in The Bahamas. We are at the mercy of the world around us. There is no comparison to the US. To understand these issues, does require a few years of intense study. From the Rothchilds, to the Morgans, Warburgs and beyond, and how the banking system of Europe was imported to the US. It was rejected in the US and then in 1913 the Federal Reserve Bank was established. Please note the following quotes.

“If the American people ever allow private banks to control the issue of their currency, first by inflation, then by deflation, the banks…will deprive the people of all property until their children wake-up homeless on the continent their fathers conquered…. The issuing power should be taken from the banks and restored to the people, to whom it properly belongs.” – Thomas Jefferson in the debate over the Re-charter of the Bank Bill (1809)

“When a government is dependent upon bankers for money, they and not the leaders of the government control the situation, since the hand that gives is above the hand that takes… Money has no motherland; financiers are without patriotism and without decency; their sole object is gain.” – Napoleon Bonaparte, Emperor of France, 1815

“The study of money, above all other fields in economics, is one in which complexity is used to disguise truth or to evade truth, not to reveal it. The process by which banks create money is so simple the mind is repelled. With something so important, a deeper mystery seems only decent.” John Kenneth Galbraith (1908- ), former professor of economics at Harvard, writing in ‘Money: Whence it came, where it went’ (1975).

“The few who understand the system will either be so interested in its profits or be so dependent upon its favours that there will be no opposition from that class, while on the other hand, the great body of people, mentally incapable of comprehending the tremendous advantage that capital derives from the system, will bear its burdens without complaint, and perhaps without even suspecting that the system is inimical to their interests.” The Rothschild brothers of London writing to associates in New York, 1863.

“The banks do create money. They have been doing it for a long time, but they didn’t realise it, and they did not admit it. Very few did. You will find it in all sorts of documents, financial textbooks, etc. But in the intervening years, and we must be perfectly frank about these things, there has been a development of thought, until today I doubt very much whether you would get many prominent bankers to attempt to deny that banks create it.” H W White, Chairman of the Associated Banks of New Zealand, to the New Zealand Monetary Commission, 1955.

“I am afraid the ordinary citizen will not like to be told that the banks can and do create money. And they who control the credit of the nation direct the policy of Governments and hold in the hollow of their hand the destiny of the people.” Reginald McKenna, as Chairman of the Midland Bank, addressing stockholders in 1924.

So yes, Ms. Phillips, the national debt is a creation of the banks. All countries have the right to print their own money, yet we borrow it. Sound crazy? It is, but we have gotten used to it. To understand where we are, us modern, educated humans,is to realize that our world is based on nothing but money. Our lives are controlled by it, our governments completely enslaved to it, and we never voted for any bankers. Take this idea of Quantitative Easing that the Fed enacted after the financial crisis of 2007. Nothing but a give-a-way of money to the banks and moneyed interests. Because they had their tentacles so deeply in the world's banks. As businesses they failed and worse, they defrauded their customers. Yet, they were allowed to continue, made whole in many instances, and nobody at the top went to jail. Is this not a rackets. There is an excellent and fascinating documentary called, "Inside Job" which highlights what went on. We live in la-la land. Only we dress up to go to the office, or church, or to the bank. As if we are well-educated responsible adults. In reality, we are owned. There is little in our daily life that we truly control.

Ms. Phillips, you state, "From an accounting view, The Bahamas is in far better condition than the US. Sure, our debt is high for a small nation, $8.2bn, but that is still under 65 percent of GDP." To make this statement, there can only be a very dangerous lack of understanding of who and what controls our world. The Bahamas, as most every other country in the world is, is entirely at the mercy of the US banking system and its wide ranging and entrenched organizations. Try "Confessions of an Economic Hitman" by John Perkins. It is a few years old, but can shine a light on what the reality is regarding what really controls the world. The US could shut down the Bahamian economy in a weeks time, if it was in their interest. I just finished "Cocaine Wars" again. If this doesn't give an interesting and frightening account of how The Bahamas has been corrupted by a handful of drug traffickers, imagine the power of a national superpower.

But yes, Ms. Phillips, I firmly agree with you that we need to focus on climate change.

Ms Philips, You appear to have been misled by the climate alarmists who are spreading fake news. These people are not qualified scientists. FYI; sea level is not rising appreciably and CO2 at 0.04% of our atmosphere, cannot effect climate, it is plant food. And as the Australians have discovered;"renewables are not any solution. Please learn some geoscience.

Tear down everything on Bay Street and start over ........... make some money from a valuable downtown waterfront (more than a cruise port) and pay down on the Debt.

Then Govt can take some of that new money and spend on all kinds of Climate Change projects ............ Kill 3 birds with a New Downtown