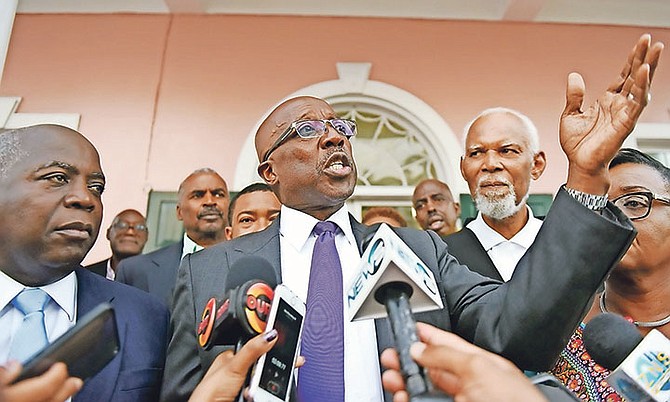 SHANE Gibson’s lawyers want Police Commissioner Anthony Ferguson removed from office and will make a complaint to the Bar Association to have Director of Public Prosecutions Garvin Gaskin disbarred due to the way investigations were handled in Mr Gibson’s case, according to former State Minister for Legal Affairs Damian Gomez, QC.

In defending their client, Mr Gibson’s lawyers stressed the testimony of Assistant Superintendent of Police Debrah Thompson above everything.

ASP Thompson admitted she was wrong to meet key players to synchronise their statements. Prosecution lawyers argued that the subsequent changes to a witnesses’ statement were immaterial. ASP Thompson testified that such conduct is common in investigations. She said Commissioner Ferguson and Mr Gaskin were aware of her meeting with contractor Jonathan Ash, Mr Gibson’s alleged co-conspirator Deborah Bastian and their lawyers. Mr Gibson was accused of soliciting and accepting bribes from Mr Ash, with Ms Bastian being his alleged middle-woman.

When she summed up the case, Supreme Court Justice Carolita Bethel told jurors this coordination of witness testimonies was “very wrong” and should not have happened.

A day after jurors acquitted Mr Gibson on the 15 charges he faced, Mr Gomez said: “This ain’t gon’ end like this.”

“We will lodge it with the Police Service Commission and following that we will take legal action,” he said. “We are also going to make complaints to the Bar Association in respect to the conduct of (certain persons) with respect to the (alleged) witness tampering in this case.”

“We will be asking that they be disbarred,” Mr Gomez said. “They have (taken action) with the purpose of having Shane Gibson imprisoned for over eight years.”

Mr Gomez said if they aren’t disbarred, lawyers will have the Bar’s decision reviewed by the courts.

“I’m instructed to take this to the end,” he said. “This is where the rubber hits the road and it is important for those of us who enjoy the privilege of being members of the Bar not to conduct ourselves in this way. Where we do not exercise our right to assert our duty against the abuses of the state we are behaving unethically. Worse yet, if we are paid to abuse citizens of the Bahamas in the way Shane Gibson has been abused, we ought not to be members of the Bar.”

Mr Gomez said the complaints will be sent on Monday.

“All of their conduct is judicially reviewable,” he said. “If they refuse to act we will have that refusal reviewed by the Supreme Court. This is a very serious human rights issue and I am surprised that the organisations that normally speak out for Haitians have not spoken out for Bahamians on this.”

“It is against a just result because they fix the result in a police room,” he said. “We need a real inquiry so that we can actually say to people ‘sorry, release them’ and deal with the criminal justice system in a way that holistically restores a level of order to our society. Too many people are upset and angered and they are taking law into their own hands because they have lost faith in the system. ASP Thompson’s testimony justifies that loss of faith. It has to stop.”

Commissioner Ferguson declined to discuss ASP Thompson’s statement yesterday. Mr Gaskin could not be reached; an official at his office said he was out of the country.