Abaco ‘Has No Law’ Say Residents 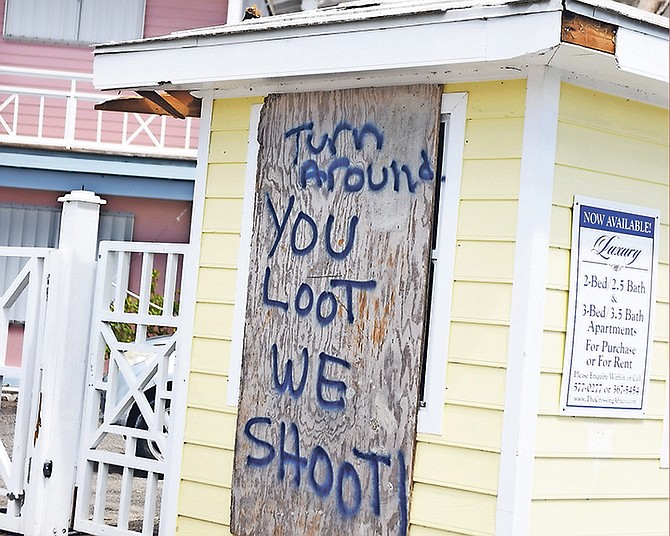 A makeshift sign threatening would-be looters is painted on a board outside an apartment complex in Abaco. Photo: Shawn Hanna/Tribune staff

SOME Abaco residents trying to rebuild their lives after Hurricane Dorian’s destruction say their worries are compounded by continued incidents of looting and theft.

These safety concerns have become so much of an issue that one resident threatened to “shoot anyone dead” that attempted to enter her property.

Others fear that the problem is festering and will only worsen if authorities there on the ground don’t double down on measures to protect people from thieves.

“Abaco don’t got no law right now,” the woman, who did not want to be named, told The Tribune from her porch in Marsh Harbour.

“I tell ya one thing, me and everyone else around here is armed and I’m sure if someone tries to come in here I’ll shoot them dead. I’ll shoot anyone dead.”

She claimed residents were wary of depending on police or marines to get a handle on the problem, adding there had been a lack of concern.

The Tribune canvassed Abaco yesterday where residents said while the focus should solely be on restarting lives, they worry about being victims of ill-willed people.

While on the island, armed forces seemed to have been more concentrated at ports of entry like the dock as opposed to in communities where almost every abandoned car had an open gas tank and doors to the few standing uninhabited homes were flung open.

“They are allowing the boys from the south to be stealing stuff,” the Abaco resident claimed. “They coming into Marsh Harbour and stealing everything they can put their hands on. It’s the Bahamian boys stealing the stuff.

“Some people saying it’s the Haitians. The Haitians will go in and they do certain things, but the local Abaco boys from the south they come in and they stealing engines, trailers and all that kind of stuff. What for?” 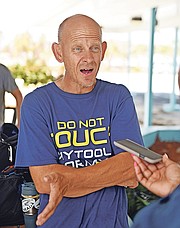 This is a situation that could potentially get worse, according to Colin Bethel, another Abaco resident. Looting forced him to send his family away in the immediate days following Hurricane Dorian. His wife and two children have since returned. He fears crime will pick up once more residents return to live in planned tent cities.

He told this newspaper: “My wife and kids left after about three or four days because of all the looting that was going on and it seemed that nothing was being done about it.

“They had started to infiltrate into people’s homes and stuff and so I didn’t feel like we were safe so we evacuated and I stayed just to protect my premises as best I could.

“They have returned now because we felt it was safer.”

Mr Bethel said he raised the issue with National Security Minister Marvin Dames in a small meeting on Monday, but got no satisfaction in the minister’s response.

“It’s a bit of a concern and I asked the minister this yesterday (Monday) and he kinda didn’t give me clarity on it, but what is going to happen when they set up the different villages that we are going to need to set up for workers?

“That crime is going to start back up. How are they going to protect this because if they can’t, nobody is going to come back or I’ll have to send my family away again.

“I can’t have them here (and) unsafe so that’s one of the major concerns.”

He added: “I think the safety may be short lived and that was my question to the minister yesterday, how are we going to control this? Just last week certain people moved back so how are they going to control it? I really didn’t get clarity on that.”

He said looting on a large scale had ended, but it gave way to thefts of opportunity.

He claimed Abaco had been targeted by some people from New Providence.

“Looting on a large scale here is over,” the seven-year Abaco resident told The Tribune. “There is still some opportunity thefts here. They just caught a few thieves here the other day. They flew in from Nassau and came into here to rob money from a home that they knew was there. These guys are not from here. They are opportunist thieves.

“That’s what they’re doing here, seizing the opportunity to steal something that doesn’t belong to them. That’s where the concern is. The amount of people here right now, it is minimal. As these numbers start to increase the policing needs to be more diligent and it needs to be more protective and the police need to be looking out for us.”

Crime concerns aside, both Mr Bethel and Mr Dilon said they are looking forward to rebuilding the storm-torn island, although it will take years to do so.

Calls were placed to both Mr Dames and Royal Bahamas Police Force Commissioner Anthony Ferguson but they were not returned yesterday up to press time.

Dorian has exposed the fact that our elected officials no longer have control or influence over our Defense Force and Police Force......law enforcement in our country now marches to its own drum beat. Most Bahamians should be terrified by this fact. Just imagine for a moment the chaos and anarchy that would exist if New Providence Island took a direct hit from a major category 5+ hurricane like Dorian. What use is a government that cannot protect its citizenry from crime and the effects of an invasion by thousands and thousands of illegal aliens?

Finally, it's originating right out mouths on the ground comrade members within the Abaco populaces that, it is not the Haitian nationals who are doing the looting. It is we own kinds be's stealing we things, yes, no .... and if the looters don't voluntarily turn around - we goin turn them around live live bullets protect the little amount thing that Mother Nature has entrusted us be left with .... even the Crown Minister, and the Commish, charged with providing security and protection, aren't being responsive to the looting concerns voiced to them, directly by Abacoians, yes, no ... If they will enter through locked doors and shit windows - just imagine what will happen when prime ministers sends Abacoians off for six-months camping outdoors adventurers be's under the moon to live in tents.... there is no making"" tent cities,** up ....

The purported Bahamian thugs in South Abaco are only now taking what the mirauding armed Haitians in Central & North Abaco did not take earlier because they lacked pickup trucks to haul the more bulky and heavier stolen items away. And the only reason the Haitian looting has slowed is because after a month of unstopped looting there's very little left to loot.

We learned in school the Bahamas people are world-renowned in Salvage and as one of the globe's most skilled Shipwreck merchants.

It's a cultural trait, or so say the history books. The practice is even codified by you people.

Those people are all traumatized out-of-their minds.

There was an ginormous disaster with you all, compounded (fatally) by the glaring fact your owners had absolutely no plan and were caught completely unprepared with their trunks down.

Just wild, out-of-your heads in shocktrauma, for the (usual) 28 Days.

All thoughts and feelings. All fear... And let's talk definitions. No state aid, no state response, no state back-up reserve water, no plan, taken totally-by-surprise....

Looting is only looting when it's not an absolute survival situation.

These whites. They purebreeds? Purebreed Nazionalés? If not: why a personal audience with a ministre?

Did any of ze Hate'nem types get one of those? Or, perhaps, where there's an entire cattle-waggon-train-cart full of "certain kinds of people" are desperately trying to survive .... did they get a TLC photocall with a ministré?

The hell they did.

♤♡◇♧ Bet you 1000DM these are the same types of lowlife screwballs who confronted and intimidated Chef André at one of the LZs. After all? He speaks like an avocado chicañno! Looks like one too!

All full of the whitemans` FEAR .... and psychologically impacted in ways they still don't comprehend because of the sheer thickness of their skulls.

(Matched only by the breadth of their jankee pocketbooks). Scummers.

And ... this guy Doktor Minus? Turning up at the United Nations and delivering an address that sounded, on content, pretty much like a contemporary EU primary-school level geography lesson?

Do you realise what a european 12 year old would think of you types of lowlives seeing that on the evening news....

Material s/he did five years ago back in primary school. And we're taking about Europeans who've yet to ever hold a conversation with a black.

Almost as though all new information (to the Minus man) he has had to speed-cram into his head during a crash-course tutorial on the flight up to NYC.

And it did sound new to him, too.

That's the news-aspect .... to our audiences.

Next you will feel free to call us monkeys. You need to take your medication and carry your red neck ass off this damn blog!!!!!

It is not just in Marsh Harbour. My house was vandalized and a few days before I was harrased by s couple of forieners, the local officer told me he would be taking me to court for reporting them. He is getting his house rebuilt by these people so he has no intention of upholding the law. Pictures of my house were deleted from the local Facebook page and the poster banned. After a concrete block was thrown in through my bedroom window into my bed I fear for my life, and will do whatever is necessary to protect myself. The police are useless. Protect yourselves brothers and sisters.