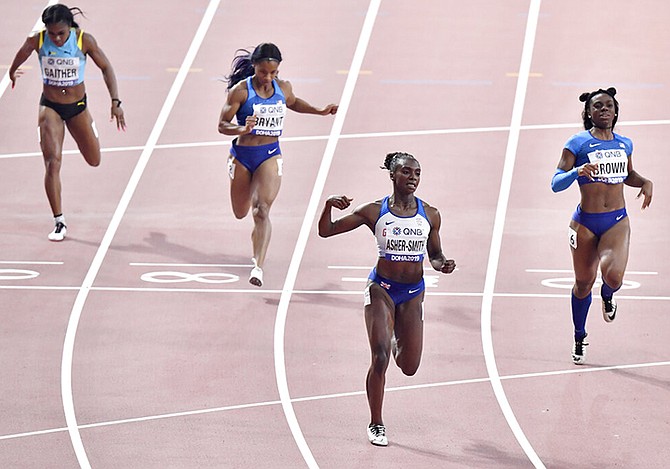 DOHA, Qatar: As fate would have it, Tynia Gaither drew lane nine again and finished eighth in the women's 200 metres final at the International Amateur Athletic Federation's 17th World Championships as she did two years ago at the last Worlds in London, England.

Running blind in “no man’s land,” Gaither couldn’t make up the deficit coming off the curve and watched as the field pulled away from her in the Khalifa International Stadium. Yet, she gave it her best shot, crossing the line in 22.90.

“Not even close,” were the first words Gaither uttered as she tried to describe her finish. “I guess I was tired (running the rounds in both the 100 and 200m) as she attempted the sprint double. “I have to take the bad with the good and move on.”

Lightning struck twice for Gaither in the same event as she had to battle her way out of lane nine in the semi-finals to get into the final. But this time around, she couldn’t come up with the magic, much less the energy to power her way up the ladder.

“I did not understand it,” said Gaither about drawing the same lane twice in back-to-back races.

It was a new national record of 21.88 for Dina Asher-Smith in clinching the victory for Great Britain as she added to her silver in the 100m.

American Brittany Brown did a personal best of 22.22 for the silver and Switzerland’s Mujinga Kambundji earned the bronze in 22.51.

“It was an unbelievable race. They were strong and they went out there and got the job done,” said a dejected Gaither about the outcome of the top three positions on the podium. “It was hard being the rabbit, but I tried to stay as technical as I could.” Gaither, 26, admitted that she wished she had not contested the sprint double, but it was a decision that she will have to live with as she got back to the drawing board and prepare for the 2020 Olympic Games in Tokyo, Japan.

“Probably more mental, but physically I didn’t want to do it,” Gaither said. “I didn’t want to double, but my coaches insisted. I ran three grueling rounds in the 100m and still had legs for the 200m. I wished I had just ran the 200m.”

Not taking anything away from what she attempted, Gaither admitted that if she’s going to be competitive, shed will have to “step up my game because these girls ain’t playing. I have to get stronger. Last place is not where I want to be. It doesn’t feel good.”

For next year, she feel she has to be technically sound and get much stronger with her workout in the gym.

As for another double at the Olympics, Gaither said if it’s up to her, she won’t do it.

“You can do that at a smaller meet. Not with these big dawgs.”

Despite not coming through with a medal in the first of three finals at these championships for Team Bahamas, Gaither said she want to thank the Bahamian people for their tremendous support because it helped in their effort to go out and succeed.

Shaunae Miller-Uibo will be going for her first world title in the women’s 400m final tonight at 3:50 pn EST and then on Friday, Stevie Gardiner will bring the curtain down for the country in the men’s 400m final at 8:20 pm.

Unfortunately, the Bahamas won’t have any teams in the relays over the final two days of competition.