Left In Limbo After Dorian 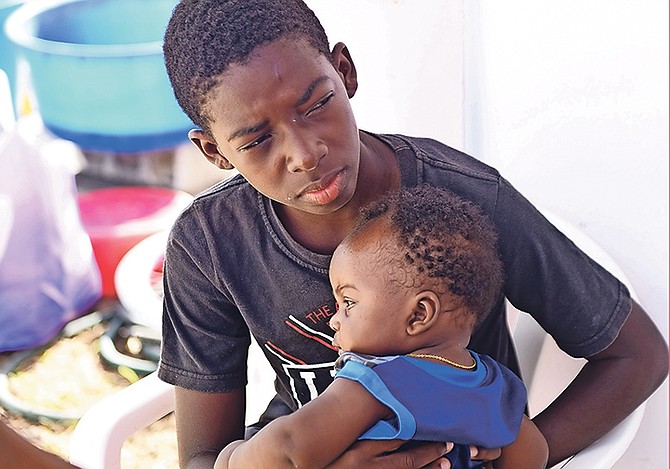 Two youngsters of Haitian descent in Marsh Harbour, Abaco, yesterday. The Tribune canvassed residents to see how they were coping with life after Hurricane Dorian’s passage. Photo: Shawn Hanna/Tribune Staff

HURRICANE Dorian has disrupted the certainty and comfort that Haitians living in Abaco were once accustomed to, with many of them yesterday urging the government to let them rebuild.

The mountainous rubble and gripping stench in The Mudd, Pigeon Peas and Sand Bank shanty towns are symbols of lives now in shambles.

Many have been forced into church auditoriums since Dorian’s passage, telling The Tribune they have no clue what they’ll do now.

According to several residents who call these unregulated communities home, they are simply waiting to see what the government will do, despite the Minnis administration doubling down on warnings that not even those in shelters in New Providence and Grand Bahama are immune from repatriation.

On Abaco, there is a will among many Haitians to stay despite the state of the island, which has now developed a fly infestation.

Charity Alouidor said he was born to Haitian parents in The Bahamas. His children were born here also.

He is incensed by the government’s lack of action following the storm and wants the Minnis administration to allow people like him to buy property in The Mudd to rebuild his home.

He said without some assurances from the government he, like many others, has nowhere to turn. He lost everything in the monster storm and was only able to save one pair of short pants.

“I used to live in The Mudd now I have no place to live,” Mr Alouidor said. He’s been living there for 15 years and was adamant that most of the residents lived in the community because the conditions were “slack” and lacked regulations.

“What happen is I could prove who I am. I born in the Bahamas and my children born in Freeport. When Ingraham was there I think it was better. (Prime Minister) Minnis don’t worth .

“I waiting for them though. I know one of these days they gone come to me tell me vote for them and I all my children, all them could vote. I gone make sure tell them don’t vote no one. Minnis ain’t do no good job, (Philip) ‘Brave’ Davis don’t do no good job. Because I never see them since the hurricane. They say he been there, but I don’t see him. Where I was by the complex, that’s the government place, that’s where he supposed to be.”

He admitted conditions in The Mudd prior to Dorian were not good. He wants to rebuild under better circumstances.

“What I want now, government could maybe clear somewhere (and) sell every Bahamian-Haitian piece of land. I don’t own that free. If he give it to me free I take it, but if he say pay later I would pay later when I find job.

“When you build it properly, you get proper light and water, you finish with the slackness in The Mudd.”

Asked about deaths in his community, he said he believed there were more than had been reported.

The Tribune witnessed one of these bodies being loaded onto the back of a truck in the Pigeon Peas shanty town and taken to a 40ft refrigerated trailer behind the Marsh Harbour clinic.

The latest report is that 424 people are missing.

Jocelyn Jean was also born in the Bahamas. He said he moved to Abaco 20 years ago.

He is open to buying a piece of property in Pigeon Peas where he lost all of his belongings.

But Mr Jean has one problem – he has no job. He wasn’t working before the hurricane pummelled the island and so the prospects of finding work now are grim.

“I lost everything. I might be able to put my life together if I find a job,” he said. “Government should just give us a job so we could build the property back.

“But I don’t think they will rebuild it again.”

Asked where this leaves him now, he said: “Right there in the church.”

There were few on the island with better chances. Among them was Michelet Adelfin. He has a job and holds a valid work permit.

When this newspaper found him, he was working in his own apartment, trying to clean away the dirt and debris left behind by Dorian’s dangerous storm surge.

Still, he said this was only half of the equation.

“I think I finish. I finish, no life. But thank God for life,” Mr Adelfin said of his initial disposition after the storm. He admitted that he’s only stayed behind on Abaco because he doesn’t know what the government will do.

Miles away in Treasure Cay, a man named Charles, a resident of Sand Bank, and several others have been living in a church for three weeks.

He’s resided in the Sand Bank community for 23 years.

He said going back to Haiti is not an option for him.

“If other people can make it, I supposed to make it too,” he said.

Migrant storm victims who have lost their jobs as a result of Hurricane Dorian “need to go home” even if their work permits have not yet expired, Attorney General Carl Bethel said on Monday.

His comments to The Tribune came after the Department of Immigration issued a statement specifying that prospective employers of storm victims that need work permits must prove their applicant has satisfactory living conditions, because if they don’t, they will be denied.

“If the employer is still paying them then they have a job, if not then they need to go home,” Mr Bethel told The Tribune. “The files will reflect who the business or homeowner applicant is. We will know if a job exists.”

According to the government’s 2018 shanty town report, 41 percent of Abaco residents in the areas were legal residents as a consequence of their work permit.

This article is pathetic effort by The Tribune staff to incite contempt and anger by "true' Bahamians towards illegal Haitian aliens for the purpose of increased circulation and readership, i.e. profits for The Tribune owners.

The article is also a feeble attempt to persusade PM Minnis and the FNM party that they would be committing political suicide if they insist on our immigration laws being vigorously enforced with respect to the illegal Haitian community when in fact the opposite is the case.

Meanwhile 'true' Bahamians have every reason to be most concerned that the illegal Haitian community is now represented by the United Haitian Common Front (UHCF) which appears to be a serious precursor to the formation of a political party.

When was the last time The Tribune published an article written by one of its staff reporters or editorial staff members that was supportive of the very real concerns the vast majority of 'true' Bahamians have about the invasion of their country by many thousands of illegal Haitian aliens?

Expect to soon see The Tribune giving plenty of coverage to QC Smith's outrageous positions in support of the illegal Haitian community and against the interests of the great majority of 'true' Bahamians.

So does this mean no Bahamians were left homeless, in limbo and the government has been responsive to the few in need? I believed I read somewhere that some were in shelters in Nassa and Florida, or crammed mutiple families together in single family homes. No wonder every article that spun from DorIan was Haitian/Haitian Bahamian related...only they were affected I'm happy to know the Tribune is not being biased.

At some point people have to be honest and realize that there would have been no deaths or destruction in the Mudd and Pigeon Pea IF Haitians did not think they had the RIGHT to build there, violating this country's building code. Haitians alone are responsible for the hardships they suffer from the storm after illegally entering this country and building illegally!!

At least the human trafficking racket in Abaco has been busted up for the time being!