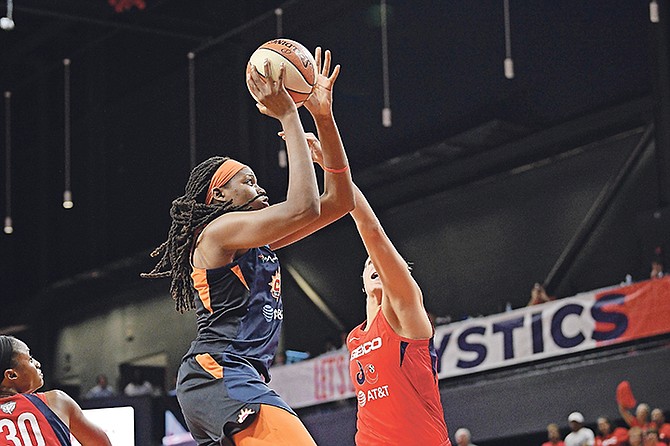 THE Connecticut Sun produced the better defensive effort they were looking for in game two and evened the best of five series in their chase for the 2019 WNBA title.

Jonquel Jones set a new WNBA Finals record for offensive rebounds with nine and posted playoff career highs - 32 points and 18 rebounds in the Sun’s 99 - 87 win over the Washington Mystics last night at the Entertainment and Sports Arena in Washington, DC.

Jones was dominant on the glass from the opening tip after failing to record an offensive rebound in game one. A record setting night on the glass also included a new WNBA Finals record with 10 rebounds in the first half alone, seven of which came on the offensive end to tie her previous playoff career high.

League MVP Elena Delle Donne was forced to leave the game after just three minutes in the first quarter due to back spasms and did not return.

ESPN’s Holly Rowe reported that Delle Donne did not practice much Monday because of the aforementioned back issue. The Sun outscored the Mystics 23-10 after Delle Donne left and Jones scored seven points in the period as Connecticut led 29-17 after one.

Jones shot 13-24 from the field, 3-7 from beyond the arc and added three blocked shots on the defensive end.

The Mystics trimmed the deficit to three (84-81) with just over five minutes left to play, but the Sun closed the game on a 15-6 run to even the series.

The series will now shift to the Mohegan Sun Arena in Uncasville, Connecticut for game three, Sunday October 6 at 3:30pm and game four if necessary, Tuesday October 8 at 8pm.

Gave five, if necessary, will be back in Washington, DC on Thursday, October 10 at 8pm.

Washington makes their second consecutive trip to the finals after they were swept by the Seattle Storm in 2018 as Delle Donne struggled through a bone bruise. The Sun are making their first appearance in the finals since 2005.