Activists claim government using hurricane to get rid of Haitians 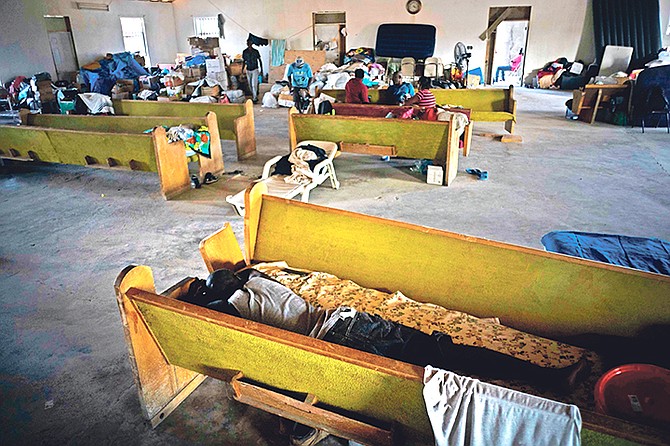 Haitian migrants displaced from their homes destroyed by Hurricane Dorian rest in a church shelter in Abaco on Saturday. Photo: Ramon Espinosa/AP

RIGHTS Bahamas said the government's policy of using the excuse of Hurricane Dorian to "ethnically cleanse the country of Haitian people" whether they have broken the law or not is "brutal" and "illegal."

In a statement released yesterday, the advocacy group reiterated its anger with a recent statement by Attorney General Carl Bethel, who told The Tribune on Monday that migrant storm victims who had lost their jobs due to the hurricane need to "go home" even if they had a valid work permit.

"These are people who broke no law, people who made their lives and homes here in accordance with the Immigration Act," RB said. "People who lost everything they owned, property, savings, travel documents, parents, wives, children.

"This policy of using the excuse of Hurricane Dorian to ethnically cleanse the country of Haitian people, regardless of whether they have broken the law or not, is brutal, abusive, illegal and contrary to every known international standard and treaty.

"The government wants to pretend that because the businesses that used to employ these people have disappeared or been temporarily disabled, they are suddenly been rendered outlaws. Aside this being a shameful case of kicking innocent people when they are down, it is also factually and legally wrong.

"At the very least, the attorneys in the administration should be aware that this is not how the laws of The Bahamas work. First of all, there is no such category under the law as 'illegal'. A person cannot be 'illegal' under any circumstances - it is an often-used, but legally meaningless expression.

"In reality, there are only two types of people when it comes to immigration: a) those who have been found guilty by a court of law of contravening the Immigration Act, and b) those who have not, and who are therefore considered innocent in the eyes of the law.

"In short, they did nothing wrong. Therefore, no lawful action can be taken against them. Sadly, to certain xenophobic elements in the country, the distinction will not matter. 'Illegal' is too often just a code-word for 'Haitian' and the appeal to enforce immigration laws just an excuse to support the eradication of a hated minority, regardless of whether they have broken the law or not.

"What the Bahamas government is seeking to do in unconscionable. It is attempted ethnic cleansing. As we have said, the matter is being reported to the United Nations, the OAS, Amnesty International, Human Rights Watch, and we are applying for official action to be taken by the Inter-American Commission on Human Rights."

It is 'true' Bahamians who are being ethnically cleansed within their very own country by illegal Haitian aliens in overwhelming unsustainable numbers.

These attacks are becoming quite boring. The Government must stand firm. Sending Haitians back to Haiti is being treated by these rights groups like the ultimate penalty. The Government is simply saying that if you have no work permit, you are no longer necessary and may go home. They are not social cleansing! The Bahamas belongs to Bahamians period. Haitian citizens are guests.

The Bahamas must follow the Dominican Republics' and President Donald Trumps lead and tell these clowns, the United Nations, the OAS, Amnesty International, Human Rights Watch, the Inter-American Commission on Human Rights and everybody else that we are a sovereign nation doing what we decide is in the best interest of the Bahamas and Bahamians!

Haiti and Haitians do absolutely nothing positive for the Bahamas and Bahamians. They are an unsustainable drain on our country that must be untethered or the Bahamas will quickly end up in the same poor state as Haiti.

Yep. This problem has gone on long enough. If we don't deal with it we're toast. Time for zero tolerance. No more shanty towns period. No more mass reproductions intent on replacing Bahamians. No more public schools costing tax payers millions filled to the brim with Haitians. Time to address the problem 100%. Otherwise, tribal warfare is around the corner or, alternatively, if Bahamians don't fight back Haitians will end up monopolizing most of the employment opportunities and hiring their own. Haitians are becoming more and more organized. This is not random. This is an intentional invasion.

Once the balance of power shifts and Haitians gain the upper hand in The Bahamas, they will be ruthless to Bahamians. That time is fast approaching.

"... the matter is being reported to the United Nations, the OAS, Amnesty International, Human Rights Watch, and we are applying for official action to be taken by the Inter-American Commission on Human Rights."

REALLY? Can somebody (a lawyer) PLEASE report to these SAME organizations what is happening to Bahamians in this country? Almost the same wording can be used, just change the H...... to B.....

Remember, Bahamians did not get TPS status after the hurricane because Trump said he did not want "people coming over to the usa, because there are a lot of people in the Bahamas who are not supposed to be in the Bahamas." He meant the Haitians of course, but did not use that word - because he knows that anybody using that word is automatically called a racist.

He knows about the situation here. We, Bahamians, have no country. We are not allowed to have a country. Our country belongs to Haitians. Anyone who says any different is a racist and gets immediately reported to all of the international cry-baby organizations.

Also, people need to understand that Bahamians DO NOT hate Haitians. We do not. I do not. I love them as children of God just like me. What we hate is their behaviour. They come here with the clear intent and action of taking over the Bahamas. They outbreed us. Every 9 months a new Haitian is brought forth from any Haitian of biological child bearing age. They live and breed in Shanty towns. If left alone, the entire Bahamas will become a shanty town. I remember an article in this daily,right after Hurricane Mathew lamenting the situation of a Haitian man in the Carmichael area who live in a shanty town with his 9 children and his home was destroyed. REALLY? Are you joking? We are supposed to feel sorry for a man who LIVES in a shanty town and feels it is ok to create 9 more human beings and force them to spend their childhood in a shanty town? We have no concern for the rights or well being of children in this country? Where are all the cry-baby organizations when it comes to the plights of these children?

Fred Smith got y'all running scared from his hospital bed. LOL. Calm down. Nothing is going to change. Accept it and carry on with your life.

This group is a joke. They use such bold language a's "ethnic cleansing" to paint a picture that is not consistent with reality. If we had real lawyes in government they would sue this "rights" group for defamation. The reality is the only people being ethnically cleansed are Bahamians.

All of these acrommyned organzations, are very aware of the atrocities happening to Haitians in Haiti...and they don't care. So what exactly is reporting Bahamas for enforcing it's immigration laws supposed to accomplish?

You people are less than a half million.

You haven't got a chance, against all of us.

Doktor McMinus be like a bullet in the head to you slaver gonners.

Don't any of you be planning to get back up again neither, nazis.

Don't never, ever be banking to stand back up again.

The Bahamas does not need an excuse to remove anybody in this country that it determines does not have a right to be here!!

Now is the time to normalize this mess and get all illegals out!

They are here ILLEGALLY WTF don't you feel the need to support the law of the country you live in ???? It ain't a red light lady...