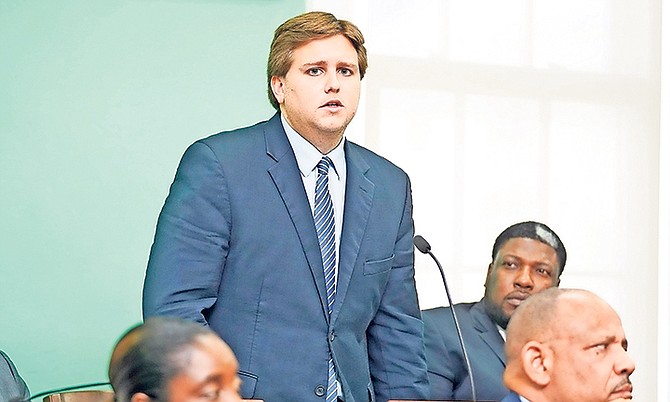 CENTRAL and South Abaco MP James Albury said he rode out Hurricane Dorian in a house on Abaco.

“I was in a house riding it out just like everyone else, the same exact position,” he said in the House of Assembly yesterday, responding to heckling from a seated Progressive Liberal Party parliamentarian. In the days after Dorian devastated Abaco, some wondered about the whereabouts of Mr Albury and rumours were spread that he was in the United States when the hurricane struck his island.

“For those of us who have went through it, I can sure you it is an impossible thing to describe, the sheer horror and panic,” he said yesterday.

To date, 60 people have officially died because of the storm, most of them Abaconians while others are victims from Grand Bahama. Four hundred and twenty four people are still reported as missing.

“We’re a very strong people,” Mr Albury said. “This storm has tested our mettle but as long as Abaconians live and breathe, the spirt of our island cannot be broken. I ask all of you to please remember that it’s not just the splintered trees, the warped metal, the foundations of rubble, which once were family homes.

“Our world is gone as we knew it, everybody’s. We will come back stronger and better than we were before. I want to reassure my constituents that as long as I am here, have breath in my body and any ounce of energy and power to do so I know the concerns, I know the heartbreak and I know the struggle because I live through it. It’s my home and I will do everything I can to make sure we get everything we need, every issue we are concerned about in here, not least of all safety and security.

“Abaconians are strong, we’re ready, we’re willing, we have a desire to rebuild and come back, younger generations, older generations, we are ready, and hopefully very soon with the provision of additional law enforcement measures and other measures I’ve spoken with my parliamentary colleagues about, that is going to be the key going forward. As soon as Abaconians feel safe to return we can rebuild and begin that process in earnest. I just wanted to stress that point specifically. I want to reassure them that I’m doing all in my power to assist them and bring the safety, security and the dignity they deserve.”

Although the presence of law enforcement has increased since Dorian passed, more than a month later residents continue to complain about criminal acts, particularly theft.

He doesn't believe himself

But he certainly does look very traumatized in the photo to this article.

While reading this hereto hurricane recall whilst recited off the tongue a comrade "whipper smacker" the South Abacoian MP, he self's - humourous biblical lyrics to a benefiting under the storm's eye's song, just kept popping upstairs me creative brain, yes, no .... and, and it came so naturally - befitting be leaving the tongue a Imperialists red shirts elected ....