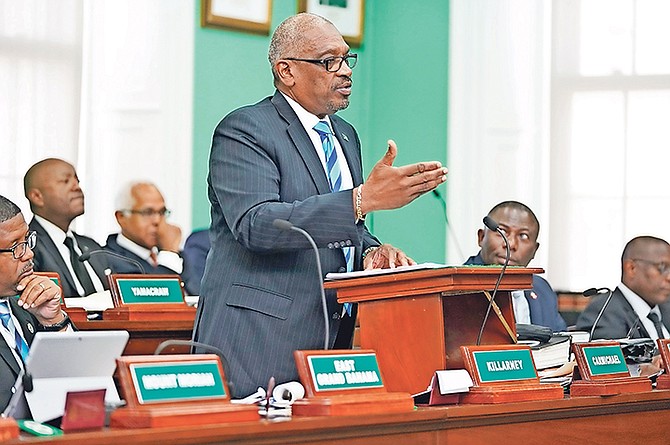 He also warned undocumented migrants to leave the country voluntarily or be forced to leave, reiterating comments he made in 2017.

This is the latest strike from the Minnis administration to thwart rebuilding and repopulation of The Mudd, Pigeon Peas and Sand Banks shanty towns.

The prime minister suggested yesterday that the move was in response to “noise” in the public concerning shanty town land.

This comes after Haitians from shanty town communities told The Tribune that they would welcome the option from the government to purchase land to rebuild their homes after Hurricane Dorian flattened virtually all structures in those areas. Others have said their lives were in limbo as they waited for clear government indication on the future plan for those areas.

“I have said before, and you will recall, we will eradicate shanty towns and return law to our country,” Dr Minnis said during his first address to the House of Assembly since Hurricane Dorian’s passage.

“I have heard noise about properties of shanty towns. I have informed the Attorney General (Carl Bethel) to compulsorily acquire The Mudd, Pigeon Peas, Sand Banks and other areas.

“This morning I met with representatives from the IOM – International Organisation of Migration — and they were informed that we are a country of laws and our laws with respect to illegal immigrants will be carried out. However, they will be carried out in a humane manner.

“Therefore I send a notice to all those who are illegal that they can leave voluntarily or they will be forced to leave,” Dr Minnis warned.

Dr Minnis also said the government is looking at making it easier for developers to take advantage of duty-free waivers in order to build affordable housing for displaced shanty town residents.

When contacted yesterday, Mr Bethel said the Minnis administration will acquire the land in question under Acquisition of Land Act. He said under this law, the government can exert eminent domain for a public purpose.

Mr Bethel said while a portion of the shanty town properties has been under dispute under the Quieting Titles Act, a significant part is owned by the private sector while some is already owned by the government.

Government officials have been taking a hard stance on migrant issues in recent days.

The Department of Immigration earlier this week warned prospective employers of non-Bahamian workers that applications for new work permits or renewals must satisfy immigration officials that satisfactory living accommodations have been arranged by that employer on behalf of the prospective worker.

The department also said applicants must satisfy officials “that the said worker will not become a charge on the state or be permitted to live in sub-standard housing” adding anyone found in violation of the immigration laws will be subject to arrest, criminal proceedings and, where applicable, detention and deportation.

After the statement was released, Mr Bethel told The Tribune migrant storm victims who lost their jobs as a result of the storm “need to go home” even if their work permits had not yet expired.

“If the employer is still paying them then they have a job, if not then they need to go home,” Mr Bethel told The Tribune on Monday. “The files will reflect who the business or homeowner applicant is. We will know if a job exists.”

According to the government’s 2018 shanty town report, 41 percent of Abaco residents in the areas were legal residents as a consequence of their work permits.

In keeping with a 2014 immigration policy put in place by the Christie administration, the department also said first time work permit applicants must be living in their own country when that application is made.

“The public is advised that non-nationals seeking employment in The Bahamas must be approved by the Immigration Department and that applications for the issuance of the first work permit will not be accepted or considered unless the individual is physically present and resident in his or her country of origin at the same time that the first application is made,” the Department of Immigration said.

“Further, the public is hereby reminded that work permits are non-transferable from employer to employer. Any transfer from one employer to another under a current permit may only be legally affected by a new application submitted by that new employer.”

Government seems to be unravelling more day by day. So immigrants who decide to leave.....by what Method? With what $$? On which airline? probably most only have the shirts on their backs, especially those from Abaco. Is there a well published pathway to facilitate leaving? Are they leaving by return tickets? Haitian Freighters?

Blah Blah Blah, Its all be said before and will be said again to placate the market. If they were serious they should follow what the law states and do it in reasonable time. If many of those who are undocumented were born here and have the right to citizenship then give it to them. Stop taking years and years leaving people in limbo. If they don't have the right then deport, but do it in a humane fashion, and finally and most importantly charge those of us Bahamains who hire them and haul them to court. They are the ones creating the demand.

The money the government will waste in this exercise could be better spent on other things, especially with expected revenue decreases from VAT and customs duties!. Don't they realize this is taxpayer money they are wasting?

It would be easier to place a warning from the Commissioner of Police and Ministry of Health barring building in those areas, fine those who try to erect structures, break them down and offer rewards for any information regarding construction of structures in those areas.

The PM is definitely not the sharpest knife in the drawer!

Seems media plays role in keeping secret the identity the individuals of record owing the some 37 shantytowns. Whether legal or undocumented, the occupiers of dwellings and business structures were not living there, nor operating for umpteen years, without paying monthly/weekly rental monies to known slumlords, yes, no .... Why are they not held financially accountable to pay the large sums monies required for clearing the shantytowns sites debris .... You register lien against the properties, and what about the properties the government is acknowledging that they've owned all along, were the slumlords, not paying lease/rental monies to someone over period like 30 long years .....None like this could've happened 30 years plus, unless government officials and elected politicians greed were be cash stuffed..... Who are the individuals long being protected, and why are they being protected ...

Tal, you write very well and ask good questions when you drop all the clownish, cutesy crap that bogs down most of your posts and just get to the point. Keep it up.

Dr Minnis also said: "The government is looking at making it easier for developers to take advantage of duty-free waivers in order to build affordable housing for displaced shanty town residents."

THIS ONE SENTENCE UTTERED BY OUR TRIPLE D SIZE DUCKIN' & DODGIN' DOC SAYS IT ALL.

OUR CORRUPT ILLEGAL HAITIAN ALIEN LOVIN' POLITICIANS ARE GIVING US 'TRUE' BAHAMIANS NOTHING BUT LIP SERVICE IN RESPONSE TO OUR VERY GRAVE CONCERNS ABOUT THE ONGOING HIATIANIZATION OF OUR COUNTRY.

WHY HAVE THERE BEEN NO EFFORTS WHATSOEVER TO ROUND UP, DETAIN AND REPATRIATE THE MANY THOUSANDS OF ILLEGAL HAITIAN ALIENS IN OUR COUNTRY??!!!

Plenty of talking. Just enforce the law and make statements after the action has been taken. Saying this prior to makes no sense at all and we could care less. All talk no action

Our corrupt political leaders are simply buying as much time as possible for many thousands of illegal Haitians aliens to each arrange application for a work or residency (belonger) permit. Corrupt officials within the Department of Immigration are making a fortune in expediting the processing of permits for an 'extra' fee and we all know what's meant by 'extra'.

Most of us know Minnis and Bethel can't be trusted so let's more carefully dissect what they said.

".........a prospective employer of a non-Bahamian worker, will be required to satisfy immigration officials that satisfactory living accommodations have been arranged by that employer on behalf of the prospective worker, and that the said worker will not become a charge on the state or be permitted to live in sub-standard housing."

No rules or guidelines have been provided to immigration officials regarding the documentation they must obtain from an employer in order to create a paper trail to evidence how these requirements are to be met for each applicant. Will an employer's or applicant's payment of a few hundred dollars under the table be all that's required?

What constitutes "satisfactory living accommodations"? Such a requirement is impossible to enforce.

Will the employer be required to post some kind of financial bond to guarantee the worker does "not become a charge on the state"? If not, such a requirement will also be impossible to enforce.

How will immigration officials go about verifying the initial and continuing residential address of the worker? Again, there's no way of enforcing such a requirement.

"In keeping with a 2014 immigration policy put in place by the Christie administration, the department also said first time work permit applicants must be living in his or her home country when that application is made."

True to form, both Minnis and Bethel are being most untruthful here. Our immigration laws, rules and policies have always required that individuals for whom a first application is made for a work permit be physically present and resident in his or her country of origin until the first application has in fact been approved and the work permit actually issued. The Minnis-led FNM government seems to be seeking to simply rubber stamp work permits and/or residency permits for the many thousands of illegal aliens who have illegally entered our country prior to this fictitious 2014 immigration policy?

Also, as recently as September 23, Immigration Minister Elsworth Johnson said undocumented immigrants must ensure that they have at least applied for legal status in order to escape deportation. This certainly implies a willingness on the part of Minnis-led FNM government to simply rubber stamp work permits and/or residency permits for illegal aliens who have illegally entered our country.

Yes indeed folks - never trust anything coming out of Minnis's mouth or Bethel's mouth. These two are well known to give us 'true' Bahamians nothing but lip service.

Please Bahamian people (and our foreign friends, deranged and sane) try to relax. We have seen this movie many many times before and we know how it ends. These politicians are just playing you. They talk big about enforcing the law, throwing a Pavlovian bone to the pot cakes so to speak and all these hating anti Haitian Bahamians begin foaming at the mouth. Just relax and enjoy the status quo. At the end of the day your belly will still be empty, nothing will change

I know this is a serious subject but the entertainment value of these comments is off the charts. The tribune should charge access to these comments. Dave Chappell is a joke. Lol.

Your bungling psychological babble is too easily seen for what it is and who you are. LMAO

They're not acquiring anything...they are working out how to pay Haitians/Haitian Bahamians for land they didn't own. This government is a joke, the AG especially.

Tribune reporters, can you do some investigative reporting by finding out when the first planeload is leaving? ..........thanks......and who owns the shanty town land in Abaco?