Stateside: Who Will Face Trump - If He’S Still President? 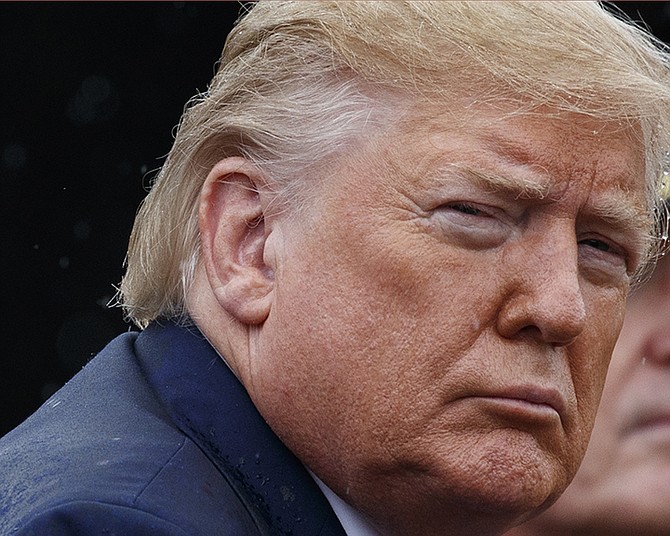 EVERY morning now, we open the newspaper, turn on the television or fire up the computer to hear new reports or opinions about American president Donald Trump, his administration and his many political critics.

Trump’s two most powerful and influential cabinet members, Secretary of State Mike Pompeo and Attorney General William Barr, both appear to have been caught both acting unethically and then lying in public about it. Pompeo admitted as much yesterday.

Trump’s personal attorney, former New York mayor Rudy Giuliani, is racing from one TV show to the next, fulminating about just about everything. If he had any hair left, we’d see it on fire.

Trump’s resolutely loyal “base” seems to be sticking with their man, according to the latest polls. Corporate mega donors must still be contributing to his wobbly campaign, too, because it was just reported that the Trump campaign raised a whopping $125m during the political quarter just ended. Thanks to the Supreme Court’s 2010 decision in the Citizens United case, the flow of corporate money will only increase.

Since almost before he took office, Trump has confirmed his view that the executive branch of the American federal government, and legislative members of his own Republican party, should work for him. If conflicts appear between this approach and their sworn duty to uphold the constitution, Trump believes they should subordinate their constitutional obligations of fealty to him.

He has overtly tried to pack the Supreme Court and lower federal courts with conservatives and loyalists who will rebuff legal challenges to his policies and methods.

Trump appears to think, with some justification so far, that this approach will not generate sufficient opposition to undermine his presidency.

What, then, of the opposition to Trump? Cranky Vermont Senator Bernie Sanders just reported a big fundraising success during the past quarter, fueled by a continuing tide of small donor contributions. Massachusetts Senator Elizabeth Warren maintains a steady advance in the polls, even as she advocates breaking up the biggest tech giants and Facebook’s CEO publicly contemplates a lawsuit against her if she became president.

Both of these proud lefties advocate social and economic policies that would move the US toward a more overtly socialist philosophy of government. Many observers wonder if a mostly conservative American electorate would go to the polls next year to support such a programme, even if it might prove beneficial to most individual voters.

This question hangs in the air, looming above all the political noise in the media.

Then there’s Joe Biden. Trump obviously sees the former vice president as both his likely and most formidable opponent next year, so he has trained his rhetorical fire on Biden and his son Hunter.

It seems that the Trump administration has attempted to enlist the heads of government of both Ukraine and Australia in the effort to besmirch Biden and his son Hunter. One has to wonder what other nations will emerge in the coming days and weeks as similar targets for the Trump machine as it girds for reelection in 2020.

In the face of this unprecedented assault, Biden seems to be resisting the urge to leap into the political mud pit with Trump. We will see how long Joe Biden can continue with this relatively restrained response.

With the House adjourned for two weeks, the impeachment process grinds on, still seeking a more secure footing with the American public. Trump is only the fourth US chief executive to face a formal impeachment process, and only the Watergate-based inquiry into Richard Nixon and his administration has led to a president leaving office.

Some commentators reassure us and themselves that American institutions will stand and hold firm during this tumultuous Trump-led push for more executive power. The founders of the republic, so this thinking goes, were wise and their enduring wisdom will ultimately prevail.

The picture of one of those founders, Alexander Hamilton, remains on the American ten-dollar bill. He was, among many other distinctions, the first US Secretary of the Treasury. In 1788, Hamilton offered this wisdom in The Federalist Papers. It was recently quoted by the New York Times:

“Mr Hamilton wrote that the inherently political nature of impeachment proceedings would be sure to polarise the country.

“Their prosecution, he wrote, ‘will seldom fail to agitate the passions of the whole community, and to divide it into parties more or less friendly or inimical to the accused. In many cases it will connect itself with the pre-existing factions, and will enlist all their animosities, partialities, influence and interest on one side or on the other; and in such cases there will always be the greatest danger that the decision will be regulated more by the comparative strength of parties, than by the real demonstrations of innocence or guilt.”

The 2019-2020 NFL season has reached the quarter pole. For most teams, 25 percent of the season is already gone. What have we learned so far?

First, the New England Patriots are as good as we thought they were. With former Tom Brady backups now starting at quarterback for two other promising teams, the San Francisco 49ers and the Indianapolis Colts, the Pats just keep rolling along. Still unbeaten after squeaking by the upstart Buffalo Bills in a game long and passionately awaited by fans from Western New York and thousands of Canadian fans from Toronto and elsewhere in Ontario, the game was played like a steel-cage death match.

But New England won, without much help from its offence. That the Pats of coach Belichick and Brady rarely get through September undefeated should seriously scare the rest of the league. They’re now 4-0.

Leading the pack among teams not based in the Boston area, Kansas City and New Orleans are looking especially promising. Neither is a surprise, as both were widely picked as challengers to New England’s expected dominance. Reigning league MVP Pat Mahomes seems to be suffering little of the so-called “sophomore jinx’ in guiding the Chiefs in his second season as a starter through their first four games undefeated. This is a solid, well-coached and well-organised team.

The Saints have negotiated a brutal first quarter schedule by beating the Houston Texans, Dallas Cowboys and Seattle Seahawks, all of whom may make the playoffs this year. Their only defeat came on the road to the Los Angeles Rams, who were aided by another wretched blown call by the officials.

And by the way, New Orleans has managed its 3-1 record without injured future Hall of Fame QB Drew Brees, whose hand was badly dinged in the loss to LA. Teddy Bridgewater, himself often injured over the course of an ill-starred career, has emerged to calmly lead the very talented Saints. This team plays away to the dominant defense of the Chicago Bears later this month. If it can beat Chicago, the Saints should be heavily favored to win every other game on their schedule. And Brees will be back off the injured list, fresh and rested, in another few weeks.

Elsewhere, teams are showing the effects of keeping their starting players on the sidelines during the preseason games on their schedule. This keeps their stars from getting injured. It also means that timing and other adjustments to playing with new teammates has to occur during the early regular season games. Results can be spotty and misleading as a result.