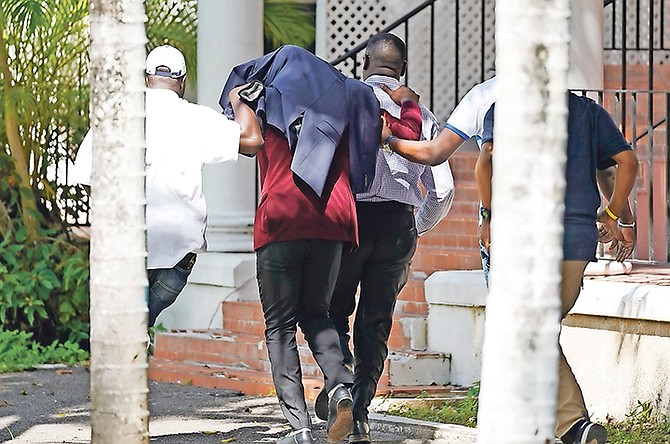 A BUSINESSMAN yesterday denied assertions that a police officer had previously arranged for him and a woman connected to former Cabinet minister Shane Gibson to “synchronise” their statements against the former parliamentarian.

Jonathan Ash denied claims by lead defense attorney Keith Knight, QC, that he and Deborah Bastian attended a meeting to “clear up” the “differences” in their respective allegations of bribery against the former minister.

Mr Ash acknowledged that the meeting in question with police was arranged because, “I was saying one thing, Deborah Bastian was saying something totally different.” However, he distanced himself from Ms Bastian, as he maintained his truthfulness in the matter.

“She (the officer who arranged the meeting) wanted to know the truth, sir,” Mr Ash told Mr Knight. “I speak the truth. Now whatever Bastian was dealing with, that on her. I only say what I know what happened.”

Mr Ash further admitted that his lawyer at the time, Alecia Bowe, made “suggestions” during the meeting on how best to “clear up” the unspecified differences. However, Mr Ash said he instructed her otherwise.

“…I told her what I say, that’s what it is. Don’t add nothing, don’t put nothing in,” he testified.

It was also revealed yesterday that despite claiming that he met Ms Bastian for the first time sometime in January 2017, Mr Ash was in regular telephone contact with the woman from November 2016, and had called her some 33 times between that month and January 2017.

In fact, Mr Knight said Mr Ash had Ms Bastian’s number saved in her phone as “NEMA Bastian”, alluding to the position she held while Mr Ash was being contracted by the government to conduct various clean-up efforts after Hurricane Matthew’s passage.

But despite that, Mr Ash maintained that he “probably” knew Ms Bastian’s name, but didn’t actually know her at that time. He also insisted that he did not recall calling Ms Bastian prior to first meeting her in January 2017.

Nonetheless, Mr Ash admitted to “blessing” Ms Bastian with lunch money sometime in January or February 2017. Mr Knight asserted that he gave her anywhere between $800-$900 for that purpose, while Mr Ash said he couldn’t recall if he gave the woman that much money.

He maintained that there were “no strings attached” to his gesture.

“If I see where someone helping me out, I say here’s some lunch,” he said, adding that he was “just being nice”.

Mr Ash also said he gave then-Ministry of Works Chief Engineer Leyton Rahman somewhere between $12,000 and $15,000, also as a “blessing” with “no pressure” attached to the gesture.

However, Mr Ash said he told Mr Rahman on a particular occasion that no one could “dictate” to him how much he “should pay out or what I should give”. When Mr Knight asked Mr Ash why he told Mr Rahman that, the witness said it was because he “wasn’t interested in being corrupt, and I know how people go”.

Mr Knight asked Mr Ash if Mr Rahman told him “look out for me”, which Mr Ash denied. In any event, Mr Ash said that had Mr Rahman tried to pressure him, he would have reported him to Gibson, whom Mr Ash claimed was Mr Rahman’s boss at the time.

That led to Mr Knight asking Mr Ash who Gibson’s boss was at the time, to which Mr Ash replied: “I would say the highest man in the country,” which at the time was former Prime Minister Perry Christie.

Mr Knight suggested that Mr Ash “knew” Mr Christie. In response, Mr Ash said he initially knew the former prime minister only from television and from him “being all over the place” as a public figure. However, he said he got to know Mr Christie after working in the Centreville constituency in 2016 post-Hurricane Matthew.

Mr Knight subsequently asked Mr Ash if he supported the Progressive Liberal Party (PLP), of which Mr Christie was leader at the time, to which Mr Ash replied: “I support both parties. PLP and FNM. I’m Bahamian.”

Mr Ash was subsequently shown a picture of the PLP convention in January 2017, where he identified himself amongst the crowd.

Gibson is charged with 15 counts of bribery. It is alleged that between January 16 and 19, 2017, and being concerned with Bastian, he had solicited more than $200,000 from Mr Ash as an inducement to or a reward for him giving assistance or using his influence in approving outstanding payments owed to Ash by the government.

Between February 10 and March 27, 2017, Gibson solicited and accepted a total of $80,000 each from Ash, but this time he was not concerned with Bastian, the Crown maintains. The Crown claims Mr Ash initially made the payments to Gibson through Bastian for the first set of payments totaling $200,000, but made them directly to Gibson for the remaining $80,000.

Yesterday, British forensic accountant Phillip de Nahlik said Mr Ash had no headroom on his bank account to make the bribery payments. However, Mr de Nahlik, who the Crown retained to analyse Mr Ash’s banking information, said that was given the assumption that the man was value added tax compliant and paid his national insurance contributions.

It was said his NIB contributions totaled $27,440.

Defense attorney Damian Gomez, QC, had suggested that the money Mr Ash cashed from his various cheques was used to satisfy his value added tax (VAT), National Insurance Board (NIB) and other financial obligations.

However, in response to a question from lead Crown attorney James Guthrie, QC, Mr de Nahlik said, based on his experience, someone walking into a government agency with, for example, a “suitcase full of money” to pay taxes is not only “dangerous”, proving its legitimacy could be difficult.