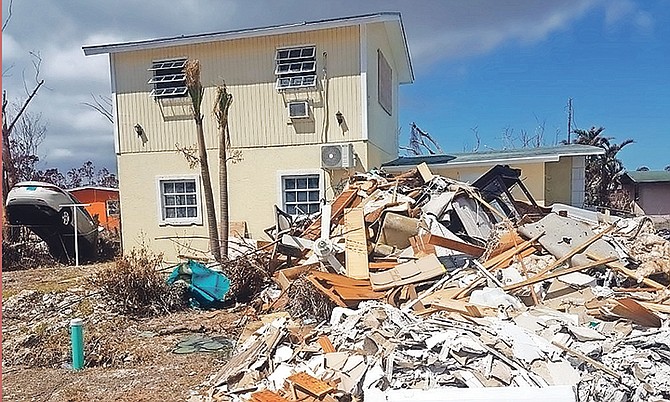 Debris in East End in the wake of Hurricane Dorian.

THE massive destruction wrought by Hurricane Dorian a month ago is still visible in various East End settlements where some residents say they feel neglected and are eager for major debris removal to start in their storm-torn communities.

“I think more could be done after four weeks; I think more should have been done,” said an East End resident who did not want to be named. “We still waiting…we feel down, depressed, discredited, and discarded – we ain’t used to this. It’s been a month now.”

Many East End residents have been displaced after they were forced to leave their homes which were destroyed to take shelter in Freeport. Gambier Point is one of several quaint communities in East Grand Bahama that was severely affected.

The Tribune visited the settlement this week and it was littered with huge amounts of pine forest debris brought in by the surge.

Destroyed possessions, furnishings, and appliances outdoors line the side of the road.

Despite the destruction, some residents have decided to remain, staying in tents on their property. Others have relocated to Freeport temporarily.

Theresa Laing is one of several residents having to commute from Freeport daily to her house in Gambier Point.

“I am in and out,” she said. “I come here in the day and stay at the house and go into town (Freeport) in the evening.”

Her family is staying with their priest in Freeport.

Mrs Laing’s house was under six feet of water during the storm, but she did not panic. “I was at peace the whole time; the water did not come in too fast and we went into the manhole in the ceiling.”

Even though her house sustained significant damage and her family lost most of their possessions, she said the important thing is that they are still alive.

“All is well; we are still in the land of the living,” said Mrs Laing, who added that her brother-in-law, George Laing, of McLean’s Town, is still missing.

Several groups have been in the area dropping off food, water and other items for residents there, however, Mrs Laing said that she has not seen anyone yet from the National Emergency Management Agency in the area.

She noted that it is difficult for residents to travel to Freeport to get relief supplies from NEMA. “I know they (NEMA) have a place in Freeport for East End people to get supplies, but some people don’t have a ride to get there to get anything,” she said.

Another resident, Terrence Laing, and four members of his family also stayed in Gambier Point during the storm. The water level had nearly reached their ceiling.

They were able to survive, he said, by wearing life vests.

“It was the five of us here at the time, including my niece who is a special child that cannot walk or talk. When I see water start coming in, I tell everyone to put on their life vest.”

He said they placed his niece on a mattress.

Mr Laing’s neigbour’s house was completely underwater. “You could not see the roof, the water was over it, but, luckily, he was not there,” he said.

A portion of his roof was torn off, and a window was blown out. All of their possessions were destroyed.

“All my life, I never seen it like this, he said. “This is the first time. I stayed because I did not know it was going to be bad like this.”

Another East End resident, who spoke on the condition of anonymity, feels more should have been done in terms of debris clean-up after a month.

The resident’s house had eight feet of water during the storm.

“It is something you could only look back at and try to move forward,” the resident said. “A lot of people lost their lives.”

The resident was appreciative for the relief supplies from the Lion’s and Rotary Clubs, and World’s Kitchen, which came into the area.

“I can’t say whether NEMA had been here yet because a lot of people came by and drop off supply, and so we don’t know if they from NEMA,” the resident stated.

The resident expected more from both local and central government. “I am not impressed about local government in this area, someone should come around to the people, and let people know what is going on.”

The resident also complained of having no transportation to get to Freeport.

“You can’t call your meeting in Freeport and expect for us to be there. They got to come meet the people,” said the resident.

Hurricane Dorian pummeled Grand Bahama for nearly two days in early September, after leaving a trail of devastation and death in Abaco. Police have said the official death toll is 60, however that number is expected to rise. Some 400 people are officially reported as missing.

This area is FNM country one can send a snake up there with a red tie who says he is FNM and they will vote for the snake. .