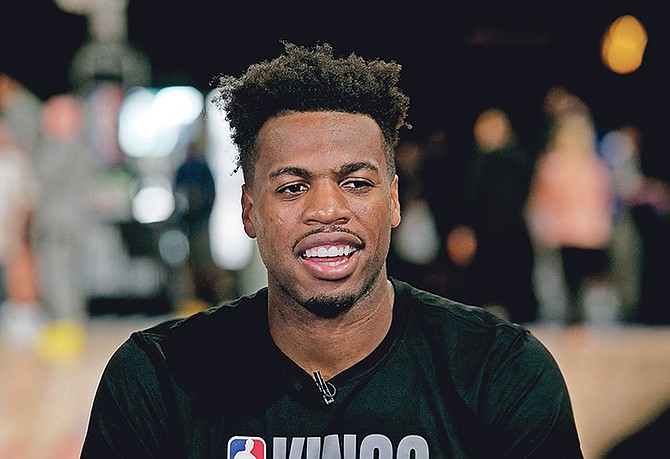 BUDDY Hield picked back up where he left off last season and continued to be the leading scorer for the Sacramento Kings in their 2019-20 preseason opening series.

The Kings and Indiana Pacers played the NBA's first ever games in India at the NCSI, SVP Stadium in Mumbai.

"We lost so we have to continue to grow as a team, even though we had a great first half, we started the second half sluggish, they jumped on us and we didn't have the momentum they carried over into the third and fourth quarter. We just have to do a better job guarding the ball.

"Offensively we can score with anybody in the league, we just have to do better defensively. We don't really look at the positives, we look at the areas where we need to get better," Hield said.

"No matter what type of game it is, it's the NBA, everyone's trying to win a basketball game so you can't come low energy, if you do you will get beat every night."

The matchups will be played in front of approximately 3,000 boys and girls from more than 70 schools under the Reliance Foundation Jr NBA programme.

Despite the losses, Hield said the experience of bringing the NBA to India was life changing for the student athletes in attendance.

"It was a great atmosphere and those kids will remember it for the rest of their lives.

"Us coming down here playing the game of basketball at the highest level, in India, it's big time. "I enjoyed myself, I'm still enjoying myself here. The people of India are very welcoming and they treat you with a lot of respect."

It was also the first game for new Kings head coach Luke Walton.

"I thought it was amazing. It was awesome," Walton said after game one.

"What a cool event to be a part of … NBA basketball. We talked about it as a team before the game, but NBA basketball in the middle of India and a crowd full of kids that have come through Jr NBA, and then we got out to the court, like you said, whoever scores, they were cheering for. I heard Kings chants, I heard Pacers chants, so it was a lot of fun."

In addition to the games, the league and its partners will host interactive fan activities, Jr NBA events, an NBA Academy India development camp for women, and NBA Cares community outreach efforts benefiting fans of all ages across Mumbai.

In the off-season, Hield has been a vocal leader in the Hurricane Dorian relief effort. Hield donated $100,000 and established a GoFundMe which has raised just over $405,000 thus far.

In addition, the Buddy Hield Foundation, in conjunction with the Fox Foundation, has been on the ground in Grand Bahama distributing supplies to affected communities.

Hield also appeared on ESPN's flagship show "Sportscenter" and on the network's investigative journalism show "Outside The Lines" to discuss the effects of the catastrophic storm.

Hield's focus on fundraising efforts and community outreach comes at a pivotal time in his professional career in the midst of contract negotiations with the Kings. Hield is set to enter the final year of his rookie contract (four-year, $15.9-million) and is eligible for a rookie scale contract extension (up to $158.1 million over five years) within the next six seeks.

The deadline for both sides to reach an agreement on the extension is October 21. The 2019-20 regular season tips off October 22.

Should they fail to agree on the extension, Hield could become a restricted free agent next summer if the Kings extend the $6.48 million offer.

Hield also set the Kings' single-season three-point field goals record this season when he surpassed Peja Stojakovic's mark of 240. During his season of milestones, Hield also made his debut in the MTN Dew Three Point Shootout at NBA All-Star Weekend.