New Us Embassy ‘Will Aid Rejuvenation Of Nassau’ 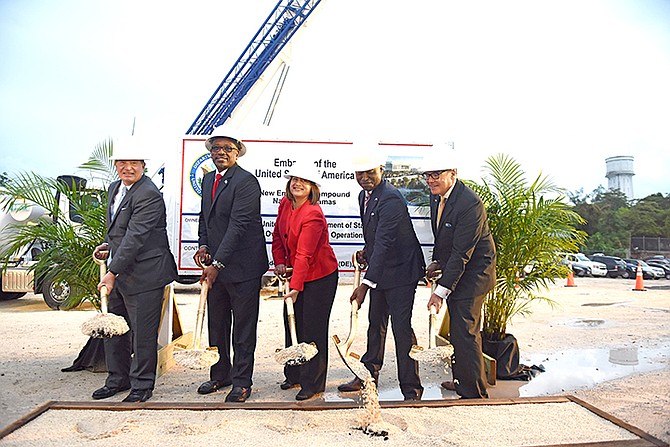 AN official ground-breaking ceremony was held yesterday for the new $318 million US Embassy being constructed on Shirley Street.

Prime Minister Dr Hubert Minnis said the facility, which will reside on a five-acre site, will aid the rejuvenation of Nassau.

He said at the peak of construction, 160 Bahamians will be employed to build the embassy, which is set for completion in the spring of 2023.

The building will be energy efficient, he said, “with 50 percent energy cost savings from a variety of strategies including the use of LED lighting, solar-thermal hot water, and photovoltaic panels.”

“The decision by the government of the United States of America to construct the embassy at this site in the City of Nassau is evidence of the  strength of the relationship between our countries,” he said.

He listed all of the ways the city is being revitalised.

“Just down the street,” he said, “the new Central Bank with its sand dollar design will be constructed on the old Royal Victoria grounds. The old Central Bank will be repurposed as a museum. Just above the old Royal Victoria site, the former main post office building will be demolished to make way for a new Supreme Court complex. The Pointe, next to the Hilton on Bay Street, is a $200 million-dollar hotel, condo, retail shopping area, and entertainment project that is nearing completion.

“Last year 2.6 million cruise passengers came to the city of Nassau. In partnership with Global Ports Holding, we are embarking on a quarter of a billion dollar project to redevelop what will become the world-renowned and new Nassau cruise port. The new Nassau cruise port will include: a new terminal, a waterfront park, a harbour village, a new inner harbour, an amphitheatre, a Junkanoo museum, shops, restaurants and an impact theatre. The number of berthing facilities for cruise ships will be expanded from six to eight, which will mean more cruise passengers and more economic opportunities for Bahamians. The city of Nassau is reemerging as a dynamic, vibrant city, celebrating and showcasing Bahamian heritage and history. The government of the United States could not have chosen another location on New Providence to build this new embassy. That the city of Nassau was chosen demonstrates that the US wants to be part of the renewal of this historic city.”

For her part, US Chargé D’Affaires Stephanie Bowers said the new facility will provide a secure and modern platform for US diplomacy.

“It’s central location will facilitate our partnership with the Bahamian government as well as support to US citizens,” she said. “We wanted our new embassy to be reflective of our strong bilateral partnership so we challenged our designers to incorporate unique Bahamian features in our plans.”

Thank god for online shopping. Now I never have to go the US ever again....

Do not know or understand the glee demonstrated by the Government , US embassy's are guarded like Fort Knox

Good stuff! This speaks to the strength of our relationship with the United States.