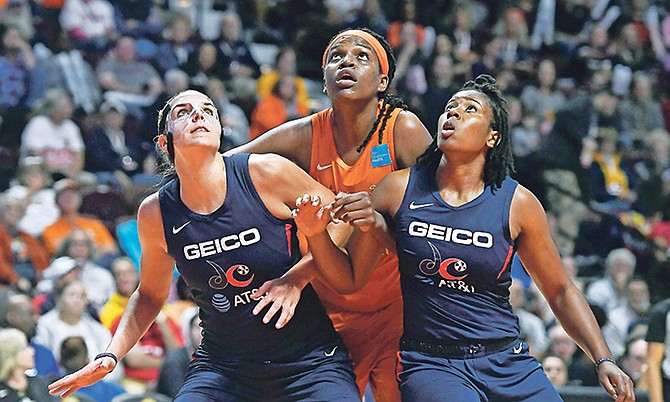 Connecticut Sun’s Jonquel Jones, centre, fights for position under the basket between Washington Mystics’ Elena Delle Donne, left, and Ariel Atkins, right, during the first half last night in Game 4 of the WNBA Finals in Uncasville, Connecticut. (AP Photo/Jessica Hill)

The WNBA Finals will come down to the greatest thing in sports - a single elimination game to decide the title.

The Connecticut Sun will force a fifth and deciding game in the series after a 90-86 win over the Washington Mystics in game four last night at the Mohegan Sun Arena in Uncasville, Connecticut.

Jonquel Jones finished with 18 points and 13 rebounds, her second double double of the series - both wins for the Sun.

The Mystics will host game five tomorrow night at the Entertainment and Sports Arena in Washington, DC.

In a complete turnaround from game four, it was the Sun that started the game on a hot shooting streak from the field en route to an early lead.

Jones assisted on the game’s first basket and scored four in a balanced first quarter for the Sun where four players made at least two field goals. They led 32-17 headed into the second. Jones’ jumper near the four-minute mark in the second maintained a 12-point lead and the Sun took a 56-40 lead at the half.

Jones had a near double double at the half - eight points and eight rebounds.

Washington opened the third on a 13-1 run and came within just four on a Kristi Toliver three pointer.

Toliver made another three on the ensuing possession to cut the lead to just one (57-56) before the Sun made their first field goal of the second half.

Jones hit a jump hook to regain a two-possession lead. The Mystics had their most dominant quarter of the series thus far and outscored the Sun 28-12 in the period. The game was tied at 68 headed into the fourth quarter. Jones scored four of the Sun’s first nine points as the team’s went back and forth with several ties and lead changes over the first half of the period.

She would score six points in the fourth and grabbed the game-clinching rebound in the last game at the Mohegan Sun for the 2019 season.

Neither team has been able to string together consecutive wins in the series thus far.

The Mystics won game one 95-86 when Jones finished with just 12 points and six rebounds.

The Sun rebounded in game two behind Jones’ historic 32 points and 18 rebounds in the 99-87 victory.

The series returned to Connecticut for game three and the Mystics won 94-81.